Do not forget to entertain strangers, for by so doing some people have entertained angels without knowing it. Hebrews 13.2

I love this verse.  If you grew up in youth group like I did, you may have heard it used to talk about encountering angels that were in disguise.  The logic was: You never know… that homeless man asking for money… that stranger who is in need of help… might actually be an angel who is undercover.  Well, I’m not quite certain that such is the case (although there have been moments when I wondered if a situation with a stranger were actually angelic), but this verse seems to be a reflection of the men who visited Lot in the story of Sodom and Gomorrah.  Either way, its fun to imagine that the youth group explanation is also a good one.

This week, Bono of U2 was with some friends and hitchhiking near the city where his next concert was to happen.  One article put it this way:

The streets have names in tony West Vancouver, but they are hilly, winding and remote – and it’s pretty unusual to see a pedestrian, much less a hitchhiker, wandering about. Even rarer? Spotting a hitchhiking rock star. As in, the biggest rock star in the world.

But in a story that has quickly become legendary – even if sounds more like urban legend – Bono, the lead singer of the band U2 had his thumb out on a West Van street Tuesday, hoping for a lift, and he got one – from NHL player Gilbert Brulé. And to add a strange coincidence to the whole thing: Mr. Brulé happens to play for Edmonton, the city where U2 was set to perform the next night.

I think this is quite a story.  Imagine the first time you actually took the risk to pick up someone with a thumb to the sky, that it was Bono?  No, he’s not quite an angel, but the surprise might be almost as great.  Thoughts? 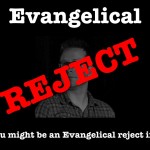 June 6, 2011 You Might Be An Evangelical Reject If...
Recent Comments
3 Comments | Leave a Comment
Browse Our Archives
Related posts from The Pangea Blog