Why I Became An Ordained Roman Catholic Woman Priest – Even Though Vatican Says “No!” (Ann Penick)

Why I Became An Ordained Roman Catholic Woman Priest – Even Though Vatican Says “No!” (Ann Penick) July 8, 2011 Kurt Willems 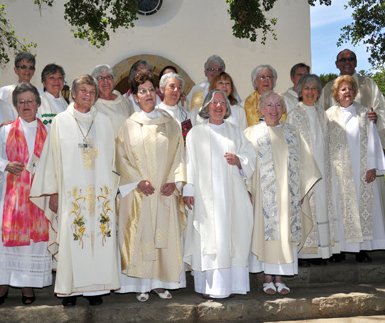 On Saturday, June 4th, I was ordained a Roman Catholic priest in Baltimore, Maryland through the Roman Catholic Womenpriests (RCWP). Their website is www.romancatholicwomenpriests.org. This is not an approved path with the Vatican nor with a number of the clerical hierarchy nor with 25% of the sitting-in-the-pew Roman Catholics. We will not leave the Church which is why RCWP is on the radar screen of the Vatican and many of the Roman Catholic clergy. We believe that the Roman Catholic Church can become what Christ calls it to be, but it can’t be changed from the outside–conversion must begin from within.

My decision to become a priest was made after much thought, prayer, and discussion with family members, priests, and religious brothers and sisters. This was not a decision that came about yesterday or within the past year. It didn’t come out of politics, militancy, or anger. When I met Jesus in my life back when I was age 19 and sought direction to a faith community, I listened to God’s call in my life and joined the Roman Catholic Church during the Easter Vigil Saturday evening Mass in 1971. I believed I was called to ministry within the Church and have been involved with a variety of ministries since including music and dance as well as college campus ministry from 1997-2008. For many years I believed I was being called to serve as a deacon and even told some people that if the Church opened up the permanent diaconate ministry to women, I would discern.

I’ll admit–I’m into being popular and this is not a popular walk! I have no illusions that this road is going to be easy to travel. Moving into uncharted waters is scary for me. But, for me, the Roman Catholic Church is my spiritual home. I believe this is where I belong. This is how I live out my faith.. I’m not being called elsewhere. This isn’t quite what I had planned! I’m only beginning to grasp the “why” of it all and I’ll be unpacking this for the rest of my life. I will try to do my best to do what God wants of me. I am a follower of Jesus. I know the Church can be better than this and it will be!

If you want some Biblical reasons to back up the approval of women functioning in every part of the leadership of the body of Christ, here is my series to check out: Liberating Women for Ministry?

July 11, 2011 Sign My Petition for a Constitutional Amendment to Ban Divorce!
Recent Comments
3 Comments | Leave a Comment
"I agree with this article, to me anything man made is pagan worship and idolatry ..."
Susan Koesters Just Jesus & Unjust July 4th: ..."
"Message needs to be heard everyday! Going thru some older emails.lol"
Douglas McCall Jesus’ Radical Kingdom Reformation within Judaism ..."
"I am a seminary student and I do not see concrete proof in a Rapture. ..."
Sagacious0ne Why the Rapture isn’t Biblical… And ..."
"Good luck on trying to politely tell those who favor Patriarchy or complementarianism that you ..."
esbee Mutuality in the Church for the ..."
Browse Our Archives
get the latest from
Progressive Christian
Sign up for our newsletter
POPULAR AT PATHEOS Progressive Christian
1