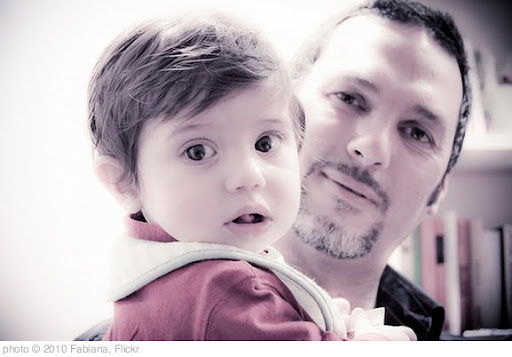 I went to see the Tree of Life a few weekends ago after preaching a sermon on the agonizing journey Abraham took with his son Isaac up Mt. Moriah to offer him as a sacrifice. There seems an inherent emotional violence in relationships between first-born sons and their fathers. As a father and first-born son, I have now experienced both sides of the strangeness that might be described as raising and being raised by myself. Thus I related equally to the main character Jack and his father Mr. O’Brien. To me, the film captures the terror of fathers like me who navigate a postmodernity that questions our relevance.

While the film is set in the fifties, Mr. O’Brien’s struggles as a flawed but self-aware patriarch seem anachronistically haunted by the contemporary ethos of illegitimacy that drives men to the gospel of Mark Driscoll. When O’Brien accused his wife of undermining him after his sons’ dinner table revolt, it brought to mind the way that fatherhood itself has been undermined today, in our digitized world where we outsource all of the concrete handyman tasks that the “man of the house” used to be responsible for teaching his sons how to do, and in our psychopathologized world where getting the right diagnosis and therapy for your children has replaced the obsolete notion of developing their character through teaching them to sit right at the dinner table and finish their sentences with “sir,” as Mr. O’Brien tried so hard to instill in his boys.

My struggle is that I buy into the feminist revolt against patriarchy, but I’m not sure whether that allows me space to exist as a father. Are my two sons supposed to have two mothers, one male, one female? Eight years ago I wrote a song called “Mama,” in which I narrated the institutional violence of Western colonialism as an outgrowth of the maleness of our Judeo-Christian deity and concluded that making God our heavenly mother was the answer. Now that I’m a father I’m not sure I want to say that calling God father is inherently oppressive. Perhaps we should call God a mother too, but is it no longer okay for God to be a father at all?

I definitely don’t buy into the complementarian myth of neo-Calvinism. It’s a big reach to turn the fact that God created us “male and female” in Genesis 1:27 into the Third Great Commandment: “Love God. Love your neighbor. Women, submit to men.” What then becomes of the counter-claim of Galatians that there is “neither male nor female” in the body of Christ? My wife is getting ordained as a minister also and she’s a better pastor than I am. She’s also a better handyman. But she’s definitely a mother.

So for Christians who embrace gender equality, is there a place for male parenthood or is gender itself inherently problematic? I feel like it was important for me to have two completely different parental voices that got inside my head. My mother taught me grace, while my father taught me excellence. I needed a clear articulation of both (though of course there was some nuance). Perhaps in “tiger mom” households, the roles shift. Regardless, I don’t think that Christianity’s emphasis on grace should preclude valuing excellence, and I think part of my role as a father is to challenge my sons to be excellent.

As I watched Tree of Life, I remember kicking the grass and cursing like Jack did whenever my father made me close the screen door lightly fifty times or nitpicked over my lawn-mowing or increased my punishment the longer I argued. Sometimes I hated my father. Now having a first-born son whose challenges and flaws judge me, I can understand if my father sometimes hated me.

Without my father, I would be way easier on myself, and that would be my deficiency. I would live in the cheap grace Bonhoeffer abhorred. As it is, I hunger for excellence, and I don’t think that hunger has to be problematized out of hand as a lack of grace for myself. After all, Jesus did say, “Be ye perfect as your father in heaven is perfect.”

I may not be able to teach my sons how to fix cars or the plumbing; like Seamus Heaney, my spade is the pen. I can relate to Mr. O’Brien’s terror that he would fail as a father, which is exacerbated by my lack of the blue-collar skill set he had. But I’m going to do my best to follow the call that God has given me to demand excellence from my sons in whatever they pursue, trying my best to do so in a firm but loving fatherly way.

————————
Morgan Guyton (M.Div, Duke University)  is an Associate Pastor in the United Methodist Church.  You can read more of his work on his blog: Mercy Not Sacrifice.

August 3, 2011
Shameless Plug: Vote For An Evangelical Reject To Speak at "The Nines"
Next Post

August 7, 2011 Share Something Sundays! – Tell Me About This Weekend’s Church Gathering
Recent Comments
18 Comments | Leave a Comment
"Only having come cross this blog today, as a South African, I would like to ..."
Keith McLachlan Name Change Myth: Saul Never Became ..."
"Growing? In my experience, these new-fangled pop-ups arrive with a $100,000 AV set-up, a rock ..."
KraigDeKompressorKruncha Sometimes Reading the Bible Literally is ..."
"Yes I read this idea awhile back in a comment on a different article, who ..."
Tom Minkler Sometimes Reading the Bible Literally is ..."
"I agree with this article, to me anything man made is pagan worship and idolatry ..."
Susan Koesters Just Jesus & Unjust July 4th: ..."
Browse Our Archives
get the latest from
Progressive Christian
Sign up for our newsletter
POPULAR AT PATHEOS Progressive Christian
1