Why the “Christian life” isn’t worth living 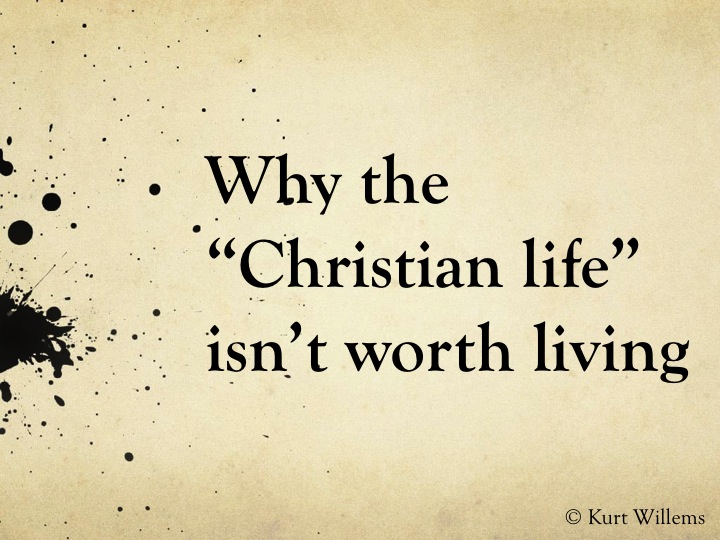 For most of my life, I focused my faith on knowing Jesus through morality management. More accurately, Jesus was savior and the Spirit was the voice that helped give me the strength to avoid things like cussing, gossip, lust, and pride. Getting through a single day where those sins were avoided meant a major victory as I walked closer to Christ.

In college, a new sort of emphasis emerged in my Christian journey. Instead of seeing discipleship as a system of sin management, I discovered the red letters of Scripture. These words of Jesus (along with the actions of Christ that aren’t in red) propelled me in a new direction: justice.

Compulsively, I would give a few bucks to homeless people as they asked. In my youth curriculum (while I served as a youth pastor), more of the emphasis moved toward Christian activism. That is not to say that I didn’t care about relational aspects of knowing God, but that justice (at times superficial forms there of) became a primary emphasis. As a result many areas became important in my personal life: signing every progressive petition that would lead to influencing the system for the poor, avoiding stores that are known for their social Darwinism, and purchasing anything I could find that is organic.

It would be safe to say that I went from conservative evangelical focuses to a progressive faith emphasis. Still holding to the essentials of the Christian theology, but believing that true discipleship meant doing certain things. It’s interesting to me looking back: at one end of the pendulum of my faith journey I tried to avoid things, and at the other end of the swing I tried to do things. Both attempts at living the Christian life miss the point of discipleship – completely!

Which begs the question: What’s the point?

I’m becoming convinced that both polarities of holiness miss the point. We aren’t supposed to live as though God is a cop, ready to bust us each time we sin. Neither does God call us to work ourselves so hard that we become void of spiritual vitality. In this sense, the Christian life isn’t worth living.

I’ve quoted Dallas Willard elsewhere but this is worth noting a second time:

“Jesus never expected us simply to turn the other cheek, go the second mile, bless those who persecute us, give unto them that ask, and so forth.  These responses, generally and rightly understood to be characteristic of Chrsitlikeness, were put forth by him as illustrative of what might be expected of a new kind of person – one who intelligently and steadfastly seeks, above all else, to live within the rule of God and be possessed by the kind of righteousness that God himself has, as Matthew 6:33 portrays.  Instead, Jesus did invite people to follow him into that sort of life from which behavior such as loving one’s enemies will seem like the only sensible and happy thing to do.  For a person living that life, the hard thing to do would be to hate the enemy, to turn the supplicant away, or to curse the curser…  True Christlikeness, true companionship with Christ, comes at the point where it is hard not to respond as he would.”[1]

This “responding like Jesus would” impulse comes to us in many places – like the Sermon on the Mount – but also in 1 Peter 2:

21 You were called to this kind of endurance, because Christ suffered on your behalf. He left you an example so that you might follow in his footsteps. 22 He committed no sin, nor did he ever speak in ways meant to deceive. 23 When he was insulted, he did not reply with insults. When he suffered, he did not threaten revenge. Instead, he entrusted himself to the one who judges justly.

Did you notice the reason that Jesus was able to endure such horrendous violence? Jesus “entrusted himself” to his heavenly Father. Prior to enduring the sufferings of the cross, with beads mixed of sweat and blood dripping down his brow, he humbly accepted the will of God the Father. In that painful, yet intimate moment, Jesus’ relationship to God took the ultimate leap forward, a deep knowing that led to a profound trust.

Jesus had chosen to know the Father’s will so much that it determined the natural impulses of his actions toward his enemies. Peter invites us to model our lives in the same way. How do we live as people of peace? The answer begins with “entrusting” ourselves to God, allowing the life of God to transform our character. When this happens, enduring unjust treatment via nonviolence will become part of our second nature.

The same is true of every other justice issue. God empowers us to become the sort of people whose impulses are bent toward love, and this happens when we create space in our lives to know God intimately. Justice and spirituality go together!

And, what of my former moral management approach to faith? Well, the sort of morality that God desires is a morality formed by the Spirit of Christ. Anything that looks like self-help strategies to administer a sin prevention plan misses the point of holiness all together. Christ wants to make our impulses bent toward holiness, including social justice, not dependent on our own legalistic strategies.

Certainly, we ought to also practice doing justice and living morally, even when we feel spiritually deflated. Those moments also work toward intimacy with God. In fact, in serving is how many people come to know Jesus the most. The risk is that we allow all of our doing to replace moments with God in our own Garden of Gethsemane, when some of the most profound “entrusting” and character formation by the Spirit takes place. No wonder Jesus often got alone for prayer before major Kingdom moments.

The Christian life isn’t worth living as I used to understand it. Instead, what if we all chose to allow the life of God to live in and among us? With such a reframe, holiness coupled with justice might just become more like second nature.

[1] Dallas Willard, The Spirit of the Disciplines: Understanding How God Changes Lives,7-8.

August 22, 2012
The Gospel of Justice in Spoken Word (powerful and creative)
Next Post

August 23, 2012 Ron Sider on Fixing the Moral Deficit of the Budget
Recent Comments
37 Comments | Leave a Comment
Browse Our Archives
Follow Us!