#FarewellJohnPiper? – What Boyd, Wright, Bell, and Whoppers Have in Common

Over the past several years John Piper has piped in on many things. And, yes friends, his pipes are loud and proud (well, not Whopper proud 😉 ). He is known for a having a very specific view of God, the Scriptures, and culture.

On God, Piper pipes about God’s glory. I affirm this wholeheartedly – except much of what he means when he uses this language. It seems to me that unless God is “omni” everything (as defined by conservative hyper-Calvinism) – Omnipresent (everywhere at once), Omniscient (all knowing), and Omnipotent (all powerful) – that God’s glory is compromised. So, realities such as who goes to heaven (renewed creation) and hell, who is victimized, who gets sick, who goes hungry… God foreordained these things as part of some sort of cosmic plan. And, all of these things lead to one place: God’s glory.

Surely, this system of thought is complex and nuanced, so I don’t want to project this caricature on all of Calvinism (there are some fine Calvinist/Reformed theologians), but this is the overall message that many of us hear from Piper when it comes to God’s nature. He believes, for instance, that: “God’s sovereign will ordains that a sinful act come to pass.” [read his approach here] Many solid Bible teachers, both dead and alive, would highly disagree.

On the Scriptures, the lens that he reads through tends to emphasize inerrancy. I would argue that at times this seems like a selective sort of inerrancy and literalism. What this unfortunately leads to, is that his interpretation often comes off as “the” interpretation because that’s what this approach to the Bible easily lends itself to. So then, “orthodoxy” easily becomes a narrow word for defining who’s in and who’s out when it comes to fellow Christians. Not based on things like the ancient creeds, but on an innovative form of theology: Hyper-Reformed Theology.

I have no qualms about someone who believes the Bible to be inerrant (I disagree, but this doesn’t mean we have to be disagreeable). My concern comes in when such a reading is the “only” reading and the one to judge fellow Christians by. One of many issues that this approach brings with it is his understanding of gender issues. He once said about female authors who make theological claims:

“She’s not looking at me, and directing me…as woman. There is this interposition of this phenomenon called ‘book’ that puts her out of my sight and, in a sense,takes away the dimension of her female personhood, whereas if she were standing right in front of me and teaching me as my shepherd…I couldn’t make that separation” (H/T Rachel Held Evans)

On culture, it seems that Piper has set himself against culture. I believe it’s possible to have a conservative/traditional view of marriage, for instance, but to simultaneously love people through words and deeds. Several pastors and ministries embody such an approach. However, when it comes to culture, Piper seems to love reinforcing false dichotomies and uncreative protest. This is true of his recent tweet concerning Burger King (more on that in a moment).

Now, before I go any further, I want to make something clear: I believe that at the core of his being that John Piper is probably a good and genuine man. He is following his convictions, albeit many wrong ones, but he is doing so in order to remain consistent. I appreciate his zeal, but wish he’d recognize the way in which what he does affects people in the church and outside of it. Many of his remarks do exactly the opposite of what he longs for – they present a God who is less glorious than the one revealed in Jesus Christ. I also wish he were more generous in his approach to those of us who believe differently about God, the Scriptures, and culture. Unfortunately, he has a track record consisting of condemnation towards fellow Christians and culture.

Consider these brief situations from the past regarding fellow Christians:

“My first encounter with the “backlash” you mentioned took place in the mid-90’s when John Piper launched a public crusade to get me fired from Bethel University and to have my church kicked out of the Baptist General Conference  on the grounds that I was a “heretic.”  There were also attempts by some to force publishers to stop publishing my books and for Christians to boycott bookstores that sold them. Hundreds of pastors signed a petition to get me fired, with only one of them taking the time to ask me what I actually believed and why I believed it…. my initial response was anger mixed with a little fear. But it wasn’t too long before the Lord got my attention and helped me realize that this response was neither Christ-like nor healthy for me. I strongly sensed that the Lord gave me an assignment I was to carry out for a year to help me through this period: Every single day, I was to pray for the well-being of those who were leading this crusade! Initially, this was really hard, but I soon found that this exercise freed me from the cancer of bitterness and even empowered me to genuinely love my “enemy.” This deepened my conviction about the importance of obeying Jesus’ command to love, serve and pray for those who persecute us (Mt 5:44-45; Lk 6:27-35). I encourage anyone who is harboring anger toward someone to engage in this daily exercise.”

Here’s another irony: I would expect that a Reformed theologian like Dr. Piper would welcome a “covenantal” reading of Paul. Perhaps he yet may. Of course, he has said many times before that he thinks my reading of Paul screens out “imputation” in his sense, and he’s right: Paul doesn’t say what that theory wants him to say. But the underlying meaning Dr. Piper and others are seeking in that theory are, I believe, not only retained but enhanced in the larger and more textually grounded reading which I have offered. I have no interest in maintaining an either/or. I am interested in seeing how what Paul actually says holds together the multiple emphases, which scholars and preachers have discerned, in his writings.

This first infamous tweet led to a huge divide between evangelical Christians: who likes Rob Bell and who doesn’t. All because of one issue his book, Love Wins, raised: how do we deal with the questions surrounding hell? Although I don’t fully agree with Rob’s approach (it doesn’t concern me either: I wrote about it here: Love Wins isn’t Jewish Enough for Rob Bell), I also worry that the culture war within the church disrupts what Jesus prayed for in John 17, that God’s church would be one.

So, within the church… John Piper (and many who are shaped by his teachings) says things like “farewell.”

And, outside of the church, to a world who needs the transformative Person of Christ… John Piper says “Good-bye.”

What if there’s a better way? What if we Christians chose a posture of theological humility and love – trusting that the Holy Spirit is at work within those of whom we disagree? Of course, there are limits to such a posture, but we need generous spaces in which to define Christian theology, not narrow ones. Again, I think the Creeds offer helpful boundaries.

What if we Christians chose to approach culture, not as their condemners, but as those who are FOR them. We are FOR human flourishing. We are FOR love. We are FOR equality. We may not all agree about our theology of sin (in this case, on blessing LGBTQ marriages as godly [see my recent article on this issue as it pertains to Christian unity]), but we can choose to live together as a people known for building bridges into culture instead of building walls against it.

Isn’t this what Jesus modeled? He never said “good-bye” to those who were labelled as “other.” Actually, Jesus partied with such people and allowed his presence in their midst to shape their common experience.

Jesus said “hello” much more often than he said “good-bye.”

And when Jesus says “good-bye” it usually is to religious people who fail to live God’s way, especially concerning issues of justice. Two friends leaned into this observation that many of us are making. My homie Benjamin Corey said:

In a world where most people die because of a lack of access to clean drinking water, call me a heretic, but I think we have bigger things to worry about than what our chemical laden fast food sandwiches are wrapped in.

Imagine a world where John Piper (and others) dismiss BK because of unethical meat sourcing– Walmart because of poor employee pay/benefits– and Apple because horrible factory work conditions.

We Christians could change the world if we became known for using our “good-byes” with discernment and our “hellos” with regularity! Who is it in this world that has been despised? These might be the ones God is inviting us to say “hello” to. Where are there examples of injustice that we passively ignore everyday? These might be the issues that God is inviting us to raise as we say “good-bye” to cooperating with greed and systemic evil. If Christians throughout the globe would embrace the ambiguity of our different approaches to God, the Scriptures, and culture, and if we would place our efforts on common projects for doing good under the nose oppressive systems, then the landscape of how we engage culture might actually bring the recognition of God’s glory that Piper and others long for! I pray that Piper eventually changes the tune of his pipes to spread the melody of love – to our culture and to fellow Christians with whom he disagrees. When he’s ready, he’ll have a whole alienated wing of evangelicalism waiting for him.

So, should we say #FarewellJohnPiper? Absolutely not! Should we engage culture with greater nuance and creativity? Absolutely yes! Should we be known for spending much of our time on heresy hunts? Please no! Rather, let’s embrace the various expressions of the church of Jesus Christ and get on mission together – not to say “good-bye” to people – but “good-bye” to injustice. And ultimately to say “hello” to each other and to culture a lot more often! This, friends, is the way of Jesus. 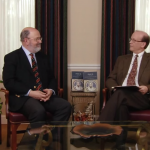 July 7, 2014
Getting "up to date" on the Study of St. Paul in about 30 Mins: Wright and Gorman Conversation
Next Post 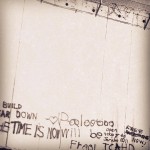 July 11, 2014 Resources for Understanding the Israeli-Palestinian Conflict - Today and Yesterday
Recent Comments
13 Comments | Leave a Comment
""
Ixire What is the Kingdom of God? ..."
""
I8UrBeans Cosmic Signs Don’t Signal a Rapture ..."
""
AMENOLITY Cosmic Signs Don’t Signal a Rapture ..."
""
StayBlessed Love is the Only Way: Why ..."
Browse Our Archives
Related posts from The Pangea Blog