postCHRISTIAN: Why we need a new reformation in the church

postCHRISTIAN: Why we need a new reformation in the church September 25, 2014 Kurt Willems

In this post, I chat with Christian Piatt about his most recent book, postCHRISTIAN: What’s Left? Can We Fix It? Do We Care?. He makes some important observations about the state of Christianity in a postmodern world. Whether you agree with everything he says or not, it’s important to allow his thoughts to provoke us to think and act differently! 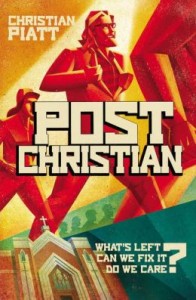 What experiences led you to write this book and what would you say is the heart of the message?

I’ve spent plenty of time both inside and outside the church, which has given me some kind of objectivity about both sides of the age-old sacred-secular tensions. My mom is a southern Baptist; my dad is an atheist. I grew up in the church, only to be kicked out at age seventeen for asking impertinent questions. I spent ten years as far away from religion as I could, and only came back when I saw it as a means to the greater end of living out the Gospel, and not as the end in and of itself.

The heart of the message is that we’re now experiencing the end of Christianity as we know it in the western world, and in many ways, that’s a good thing. Yes, attendance at church is in decline, churches are closing and entire denominations are on the brink. But some of what we’ve become so used to defending and sustaining has caused us to be distracted from our bigger mission, and as such, it needs to go.

How can postCHRISTIAN remedy some of the judgments people make about the church and vice versa?

By itself, one book won’t completely change someone’s perspective of the “other,” whoever that happens to be. But I do hope that it helps all of us consider alternate perspectives, to think about the difference often times between the intent of our actions and the actual impact, and to offer some kind of roadmap forward, along which we can all find a common space to coexist and even build something beautiful, regardless of ideological differences, religious labels and such.

In the end I hope it can help many Christians see how un-Christ-like we can be when we focus too much on our religious Christian identity, and to be open to the idea that someone can be very much like Jesus, whether or not they identify as Christian. Personally, I am more interested in how we can all become more Christ-like, both as individuals and collectively, rather than winning more people over to one side or the other. Frankly, I don’t think Jesus cared much about those kinds of false human constructs anyway.

Why does Christianity need a reformation now and what will happen if we don’t change?

The fact is, the world and the Church will change despite any of our best efforts to resist it. It’s more a matter of whether we’ll try to walk against the stream of the inevitable human condition, or if we will let go, stop worrying so much about preserving old, dying institutions and look forward with less fear and more hope.

We need a reformation in Christianity because we’ve come to worship false Gods: religiosity, doctrine, tradition, buildings, human-made identities, and all the power and money that comes with them. I think if we were before Jesus right now, asking what it would take to realize God’s kingdom vision for us, here on earth, I expect the answer would be something along the lines of, “Drop everything and follow.”

This isn’t to say we have to abandon all the church stands for per se, but we certainly have to loosen our grip. To paraphrase the words of the recent 80’s tech TV show, “Halt and Catch Fire,” Church isn’t “the thing; it’s the thing that gets us to the thing.”

If the readers take away only one thing from your book, what do you hope that is?

I hope they walk away form the book with a renewed sense of hope and purpose, not in the sense that they have the tools to sustain their current way of thinking and living, though. Rather, I hope that, regardless of religious identity, or lack thereof, we can see how much common ground we really do have to work with. I would also hope that readers would feel compelled to double down on the idea that intentional, face-to-face community and vulnerable acts of sharing our stories serve the greater good in ways that holding fast to ideology simply can’t.

We’re called to community, not just Christian community, but as a greater whole. Community requires relationship, and relationship requires vulnerability. We have to be willing to take risks, to open ourselves up to one another, and to value this kind of meaningful connection far more than the white noise and static that emerge from the kind of ideological warfare that has brought us to where we are today.

What does the word religion mean to you?

At its best, religion facilitates intentional community, mutual support, an opportunity to bear witness to one another’s lives and to mark the passage of time in meaningful ways. In drawing us close together, it can serve to bring us closer to what we understand God to be.

At its worst, religion is a tool of oppression and violence that makes us far less Christ-like than we are without it. I think it serves its best purpose when we are built to be people of faith, not of religion.

October 15, 2014 Mark Driscoll Resigned Today: According to Mars Hill
Recent Comments
5 Comments | Leave a Comment
"big fan of Boyd"
Owen W Recommended Resources: "Spiritual Warfare" Series by ..."
"Wait"
Julia 2 Reasons NOT to ‘Keep Christ ..."
"What"
Julia 2 Reasons NOT to ‘Keep Christ ..."
"Only having come cross this blog today, as a South African, I would like to ..."
Keith McLachlan Name Change Myth: Saul Never Became ..."
Browse Our Archives
get the latest from
Progressive Christian
Sign up for our newsletter
POPULAR AT PATHEOS Progressive Christian
1