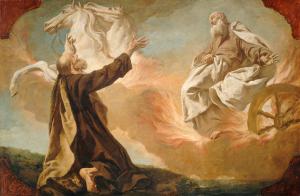 Habakkuk is one of those prophets who never quite made it into the big time, joining Amos and that noble crowd. Not only is his name hard to say and spell, there remains a fervent scholarly debate about when he was active as a prophet and even about exactly what his main claims were. I do not propose to regurgitate all that in this brief essay, but will instead focus attention, as I always seek to do, on what the old boy is actually saying as I hear him. It turns out, as our wonderful Bible seems often to do, to be a very timely word for this particular time in our religious and political lives.

President Trump’s actual presidency is now in very serious trouble due primarily to a phone call he made to the president of Ukraine wherein he appears to try to make a deal with that foreign leader by offering increased military aid, aid earlier withheld, in exchange for that president’s promise to dig up dirt on one Trump’s chief political rivals, Joe Biden, the current Democratic frontrunner for the nomination for president in the 2020 race for the White House. Trump, astonishingly and perhaps quite foolishly, made openly available a transcript of this call, after he had attempted to hide its contents on a military secrets Internet server, rather than putting it on the less-restricted server where such calls are usually housed. In about a week since the release of that transcript, the House of Representatives has begun formal impeachment investigations against the president. This will be only the fourth time in the history of our republic that impeachment investigations have begun against a sitting president. Trump, of course, vehemently and with shockingly crude language has denied all wrong doing, calling his conversation with the Ukrainian leader “perfect”. Obviously, others see it quite differently, and a long and painful and divisive struggle has now begun. More than a few pundits have judged this battle, sure to be a protracted one, nothing less that a fight for the “soul of the nation.”

There can be little doubt that Donald Trump has brought to the office of the presidency elements of a crude combativeness that have never before been any part of that high office. We have long viewed our presidents as figures of great dignity, persons of high intellect and perspicacity, trusted to be models of sane leadership, based on careful thought and reasoned arguments, surrounded with able advisors. Donald Trump has brought none of this to the Oval Office. He has rather governed on the basis of bullying, of the crudest sorts of name-calling and abusive language. He has reasoned with no one, if his public actions can be believed, save cozying up to some of the world’s most notorious dictators like Kim Jung Un, for whom he claimed an actual “love”, and Vladimir Putin, the wily former KGB agent, who shares with Trump nothing but smiles and good wishes, while, according to our own intelligence services, has in many ways intruded into our election processes in 2016 and promises more meddling in 2020. All the while Trump simply refuses to believe his own agencies on this matter.

“How long will I cry to you (YHWH) ‘violence,’ yet you will not save?” So does Habakkuk plead with his God to do something about the state of the world in which he lives. When a supplicant uses the word “violence” (chamas in Hebrew), she fully expects YHWH to act to right the grievous wrong that that word suggests. Further, the prophet claims that YHWH’s promise to right the wrong his miscarried; YHWH has not “saved” at all, but rather has forced Habakkuk continually to see a world where “destruction and violence, strife and contention” are the hallmarks of the time. “As a result, the Torah is weak; justice never wins, because the wicked surround the righteous, and justice comes out perverted” (Hab.1:4). This terrible portrait of Israel during Habakkuk’s days sounds all too familiar to us who often look in vain for light in the midst of our darkness. Whatever you may think of President Donald Trump, he has led us to a national nightmare that threatens to consume us all the way to next year’s election. We, like Habakkuk, need something we can hang on to while we plunge ever deeper into this maelstrom.

And Habakkuk offers us a remedy, of sorts, but it is hardly the quick fix we too often seek. Rather than give a simple and immediate reply to his initial pain and suffering, the prophet instead promises that he will “stand at his watching post, will station himself high on the ramparts, and will keep watch for what YHWH will say to me, how YHWH will answer my complaint” (Hab.2:1). Habakkuk will first simply do what he has been doing: he will wait for YHWH’s reply. He will not abandon his God, because no answer has yet come; he will not deny that YHWH will answer. He will wait, trusting that an answer will come.

And YHWH does finally speak, but again the answer is far from simple and quite different than anyone might expect. “Write the vision down,” says YHWH; “make it plain on tablets, so that (even) a runner can read it” (Heb.2:2), that is one who could easily miss the message delivered due to haste or due to looking in the wrong place. Make it plain for all to see! You must believe that “there is still a vision for any given time; it speaks of the goal and does not lie” (Hab.2:3). It may be delayed, but it will come; you must wait for it!

And something of the content of this awaited vision is offered in Hab.2:4. “Look at the proud! Their very selves are not right in them! But the righteous live by means of their faithful deeds” (Hab.2:4). And just who are these proud ones? The word has an interesting breadth of meaning. Its basic sense is that of swelling, of puffing up. A related noun can mean “hill” or “mound,” while another synonymous noun can mean “hemorrhoid” (see Deut.28:27 and 1 Sam.5:6,9,12). One dictionary suggests the word implies “heedlessness,” that is ultimate lack of concern. Whatever the full meaning the term, it is to be contrasted completely with the righteous who are known primarily by their “faithful deeds.” As is well known, the apostle Paul used this phrase at a crucial juncture of his thinking concerning how the righteous are to find a full life. He concluded by saying that “the just will live by their faith,” and forever fixed into the minds of would-be Christian believers that right belief was determined by right faith, that is correct beliefs, as those were designated by whoever happened to be the theological authorities at any give time. If indeed Paul had this in mind when he used Habakkuk’s trenchant phrase, and that is the subject of enormous scholarly contention, surely the Israelite prophet was quite clear when he says “the righteous will be (will be known) by their faithful actions.” Unlike the puffed up, the heedless proud, whose actions are far from faithful in any sense of the term, the righteous will be recognized by their faithful deeds.

And there is the vision that Habakkuk urges us to wait for, a vision of the righteous ones who are known by what they do, seeking to be faithful by performing faithful actions. In the mire in which Habakkuk found himself, he was urged to wait for the faithful vision that was sure to come. I think that is what we are urged to do in our own time, namely wait for what we know is the vision of righteous faithfulness. However, I would add that we are called to be active purveyors of that vision, too, and not merely those who wait for others to act faithfully. If Donald Trump is in fact guilty of a “high crime and misdemeanor” against his oath of office, he must be held accountable by those who hold up the vision of righteous actions, for that is the vision for all times, and we trust that it will not tarry forever. 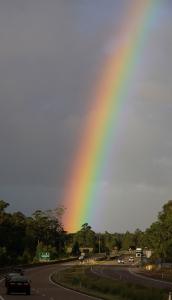 About that photo op in front...
The Empty Pew
Related posts from The Peripatetic Preacher