The Peripatetic Preacher and the Narrative Lectionary Advent 4 Luke 1:5-13, 57-80

Christmas and the birth of Jesus are very close now. We have but one more addition to the story that the Bible weaves from its very opening pages. This long tale of Zechariah unites many of the threads that have been offered to us from the Hebrew Bible, thus binding together the narrative of the birth with the vast promises of God that have preceded it. Luke is nothing less than a master in working his loom to create an unforgettable tapestry. And that final product is primarily accomplished through the use of names, some of which are fairly obscure and others of which are very well known.

The first name we encounter is that of Herod of Judah. Herod was born sometime in the late 70’s BCE to the aristocratic father Antipater, an Idumean convert to Judaism and an advisor to Hercanus II who appointed him to the post of overseer of Judea in 47 BCE. If the family was to retain their power in Judea, they had to bow in all things to Rome. After all, Pompey had conquered Judea in 63 BCE, thus cementing Roman power in the area. However, in 42 BCE Antipater was murdered, and Herod became his heir. For a brief time the elders of Judea were able to oust Herod from their country, and forced him to flee to Rome. But due to his loyalty to his Roman masters, he was able to return to Judea, protected by Rome, in 39 BCE, and in the summer of 37 BCE claimed the throne of Judea, and ruled for the nest 33 years. At the end of those years, culminating in his death in 4 BCE, Herod was a physical and emotional wreck, hated by the Judeans and out of favor with Rome. It is that Herod to whom Luke refers. In other words, the great events of the birth of John and Jesus occurred under the tumultuous and tyrannical reign of a failing monarch. 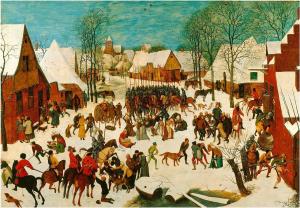 The second name of significance is that of the central figure in this part of Luke’s story, the priest Zechariah. The name means in the language “YHWH remembers,” and that is a crucial piece of information for our tale. The name occurs several times in the Hebrew Bible, and two references are especially important. A king of the northern kingdom of Israel in the mid-8th century BCE (2 Kings 15:8) ruled only about 6 months before being assassinated, marking an end to the dynasty of kings founded by the cruel Jehu. “YHWH remembers” the political intrigue and continual instability of the northern kingdom, an instability that brings about the kingdom’s downfall to the Assyrians some 30 years later. Another Zechariah is mentioned in Isaiah 8:2 in connection with that prophet’s prediction of the Northern Kingdom’s end. This Zechariah, along with Uriah the priest, served to ensure the complete credibility of Isaiah. Once again, “YHWH remembers,” and fulfills God’s promises. This Lukan Zechariah is himself a sign of God’s remembrance of promises made long ago.

The third name is a more problematic one. There are several persons in the Hebrew Bible with the name of Abijah. Luke tells us that Zechariah is in the priestly line of Abijah. Exactly how we are to hear this depends fully on which Abijah is referenced here. Perhaps the most prominent person bearing that name is the second son of the prophet Samuel, who along with his brother Joel are described to us as near worthless priests, being lured by bribery and foul acts to lives of disaster and shame. Though their father sends them to Beersheba to act as judges there in the southern deserts, their behavior is so scandalous that the elders of the place beg Samuel to recall them and discipline them severely. Is that Abijah the one we should remember in our Lukan story?

I rather imagine that the Abijah we should recall is that one who is son of the wicked Jereboam, mentioned in 1 Kings 14. Jereboam is judged the very modal of evil by the Deuteronomic Historian who was editor of the books of Kings, bringing his Southern bias into every evaluation of kings, north and south. Though Abijah, son of Jereboam, died young, he is given something no other member of Jereboam’s family is accorded, namely a proper burial and extensive mourning. This occurs apparently because “in him was found something pleasing to YHWH” (1 Kings14:13). What that “something” is we are not told. Nevertheless, it appears to be that Abijah we should think of while contemplating Zechariah’s priestly line.

When the archangel Gabriel appears to Zechariah as he performs his temple duties, he announces to the old man that he not only will have a child in his old age, but that the child will be “ filled with the Holy Spirit. He will turn many of the people of Israel to the Lord their God. With the spirit and power of Elijah, he will go before him…” (Luke 1:15-17). With the mention of Elijah, we are of course on much more familiar ground. By the time of John’s birth, during the reign of Herod, it was established Jewish belief that Elijah’s return to the earth would presage the coming of the Messiah of Israel. The child to be born to Zechariah and Elizabeth in their old age will be that Elijah. And though his name will be John, he will play Elijah’s role, announcing the coming of Messiah who is Jesus of Nazareth.

By the use of these names, along with the obvious connections of Zechariah’s age to the advanced ages of Abraham and Sarah before their own wonderful son, Isaac, is born, and the mention of David’s throne, Luke goes out of his way to connect his fresh tale of the priest and his wife to the promises of the Hebrew Bible. In devices subtle and less subtle we are to contemplate the many ways that the story of John’s birth is both a summation of the past and a prefiguring of the greater story about to be told about the birth of Jesus. Luke is a master of plot and character as he weaves his tapestry before our wondering eyes. Like Zechariah, we are first mute and amazed at what is happening, but also like him we finally open our mouths to praise and celebrate the God who fulfills even the most ancient of promises for his people. Now, we really can celebrate the nativity of Jesus, secure in the reality that it is part of a much larger story that began long ago. 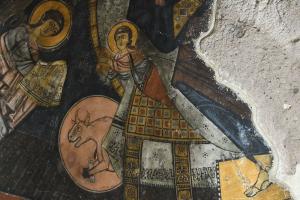 December 3, 2019
The Peripatetic Preacher Views "The Crown"
Next Post

Hospitality in Zarephath
slacktivist
Related posts from The Peripatetic Preacher