The Bible is a fabulous book. I use that adjective in both of its common senses. The Bible is both celebrated and legendary. That is, some see it as superb beyond compare, the very pinnacle of all ancient and modern writings, “the sufficient rule both of faith and of practice,” while others see it is a collection of legends, poems, and stories that have some value but are in the main fanciful and quite literally unbelievable. I readily admit that both of these groups have important insights to ponder: many parts of the Bible are without doubt some of the most rightly celebrated writings in the ancient world and are well worth reading and applying in our modern lives, while other parts are deeply problematic and troublesome, having caused no end of mischief over the centuries from eager and dogmatic readers who have employed some texts as clubs to batter others instead of supporting and enlivening them. I hope my few and persistent readers over the years of my blog have discovered that I fall more in the former category than in the latter, but also that I have never been afraid to name certain biblical texts as more troublesome than helpful.

Today, in the light of the COVID-19 pandemic, coupled with the extremely important mood of protest against police brutality against African-American citizens, I wish to focus on what at first may appear to be an odd text. I refer to Judges 21:25: “In those days there was no king in Israel; all the people did what was right in their own eyes.” The fact that this sentiment concludes the book of Judges is important as we attempt to understand and evaluate that deeply problematic book. Judges, in fact, enshrines in its pages both senses of the word fabulous.

It may seem quite obvious that the editor who wrote that final sentence was convinced that the horrors thrown up in the book of Judges can only be fixed by the presence of a king. Because the tales of Judges occurred before Israel had chosen its first monarch can explain just how appalling many of those tales were, at least according to this unnamed editor of the text. A king will solve our problems, the editor cries, echoing the later cries of the people to the prophet Samuel in their demand for a king “who will go before them and fight their battles” (1 Samuel 8:20). Scholars have long imagined that there are in the Bible two ways to view kings: kings will save us or kings will oppress us. Rather than choose between the two, I suggest that both are right. Whether kings save or oppress depends on the occasion and on the king.

But back to Judges. I have characterized the book of Judges with three adjectives, crazy, murderous, and lusty. Each of the major tales found in the book focuses on one of these three. Ehud, the left-handed Benjaminite, murders Eglon, king of Moab, with his deception and guile, ramming his concealed short sword into the king’s massive stomach (Jud.3:12-30). Jael, wife of Heber the Kenite, murders Sisera, chief general of the armies of King Jabin of Hazor, through an equal guile, luring the fleeing warrior into her tent, and dispatching him with a vicious blow to the head with a tent peg (Jud.4:21; 5:26). Gideon, a fabled warrior, executes a series of vicious battles against enemies, killing many soldiers, claiming all the while the command of YHWH, but at the end of his wars, he refuses the people’s demand that he become king, instead demanding from them gold, out of which he makes an ephod, a kind of idol, to which all Israel pays religious homage (Jud.6-8). Abimelech declares himself king, but instead of a coronation is murdered by a well-aimed millstone, tossed from a wall by a woman (Jud.9). Jephthah, son of a prostitute, becomes a mighty warrior, but after making a rash vow to sacrifice the first thing that greets him after his next victory, is forced to sacrifice his own daughter, who unwittingly rushes first from the tent in greeting (Jud.11).

Then there is Samson, who can only be characterized as an oversexed dumb brute. In the longest series of stories in Judges, the powerful Samson first marries a Philistine woman, against the express desires of his family, but at the wedding feast, this wife is cajoled by her people to discover the source of her husband’s vast strength. She fails to make the discovery, and is handed over to Samson’s best man (Jud.14)! Yes, this is in the Bible, hard as that might be to accept. Then in the most famous section of Judges, Samson is lured into a sexual relationship with the clever Delilah, who gives him perhaps the world’s most notorious haircut, thus depriving him of his strength. Unfortunately for the foolish Philistines, they neglect to note that hair has this tendency to grow back. As a result, when they all gather in a great temple to celebrate their victory of the now blinded Samson, he pulls the entire temple down on their heads, killing himself and all of them. His grave’s epitaph reads: “he killed more people by dying than living” (Jud.16:30), a grim memorial to say the least. And Judges closes its stories of monstrous behaviors with what may be the worst story of them all. It concerns a hapless concubine of an itinerant Israelite priest. Through a series of lies, followed by the grotesque murder of the helpless woman, executed by a mob of lusty citizens and the priest himself, Israel is plunged into civil war, as the tribe of Benjamin is nearly extinguished from the land (Jud.19-21). 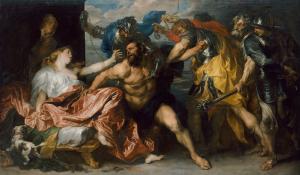 After all that mayhem, the editor of the book pleads for a king to settle everything down. And as noted above in similar fashion the people of Israel later ask the prophet Samuel to crown them a king, an act he refuses to perform, thinking that his rascal sons should follow him to the leadership of Israel. Yet, they are so bad, taking bribes, perverting justice, and grabbing the best meats right out of the sacrificial pots, the people are having none of them as leaders. And so Saul is chosen as king, and though he looks the part, being fabulously handsome, tall, and a superb warrior, it does not work out, and David, Saul’s one-time armor bearer, becomes king. However, all too soon, he shatters four of the Ten Commandments in one chapter (2 Sam.11), and eventually dies, old and helpless, with words of still another murder on his lips (1 Kings 2:9).

It appears that the cry of the editor of Judges that “everyone does what is right in their own eyes” is unfortunately not confined to the citizens of Israel but includes the very kings who were chosen precisely to solve the problem of human lawlessness in the first place. Choosing a king will not stanch the constant doing of whatever we want, and the Bible makes that fact crystal clear. No president, prime minister, despot, or ruler for life will stop us from doing what is right in our own eyes. This is proven beyond a doubt by the reckless and ridiculous actions of many citizens of the US who, against all sound medical advice, simply refuse to wear face masks, will not keep social distance, nor, I imagine, even wash their hands, though most have access to running water right out of several of their home’s taps. Are these refusals any less than murder—of self or others— assaults against the helpless and oppressed, arrogant desires to fulfill one’s own pleasures rather than sacrifice even slightly for the better good of the entire community? I see among us more than a few Samsons, who to satisfy their longings for wanton freedoms, lie, deceive, and attempt to mislead their communities by saying they understand what is needed at this fraught time in the nation’s life, but clearly will not do it, preferring to do what is right in their own eyes. The result over the last two weeks has been an avalanche of new cases of the virus, a horrifying rise of deaths due to the scourge, and a constant cry of “tyranny” by those who will not give up what they imagine are their own, individual rights as citizens of the country. Like Samson, continuous behaviors as we have witnessed recently will only result in pulling down the entire temple of the nation on our own heads, a possibility that no one wants. The USA leads the world in numbers of cases of COVID-19 and in deaths from the virus. And the reason, as the ancient Bible so succinctly and memorably says, is that “everyone is doing what is right in their own eyes.” It cannot continue, lest we all collapse under the weight of the rubble we ourselves have made. 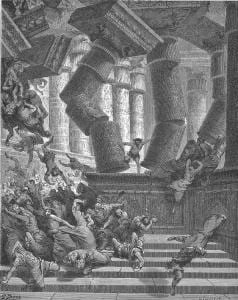 June 26, 2020
The Peripatetic Preacher The COVID-19 Whine
Next Post

June 30, 2020 The Peripatetic Preacher We Have Met the Enemy
Recent Comments
0 | Leave a Comment
Browse Our Archives
Follow Us!

Congratulations, President Trump: You Got Your...
Freelance Christianity
Related posts from The Peripatetic Preacher