Today presents to us one of the Bible’s best-known stories, Moses at the burning bush. Who could ever forget this tale, portrayed in cartoons, live-action movies, song, art, and every other sort of medium both today and in centuries past. I well remember waiting in a long, very hot line to enter a theater in Phoenix in 1956 in order to see Cecil B. Demille’s epic film, “The Ten Commandments,” nearly four hours of biblical pageantry. I was 10 years old, and was not especially religious, rarely if ever attending church in those days, but this was an epic movie and needed to be seen. Frankly, I do not remember much of the film, save the parting of the so-called Red Sea, which won the movie its only Academy Award for special effects. The prime ingredient of the scene was Jello; no CGI in those long ago days! Of course, Charleton Heston, later of NRA fame, was Moses, and my second memory is of his fabulous hair, changing from brown to silver after meeting God at the bush. If I had had such locks, I imagine a TV evangelist career could have been mine, but my then receding hairline and current bald pate hardly fit that bill.

Of course, when I decided to enter a graduate program in the study of the Hebrew Bible, I read this story numerous times in the language, and soon discovered that Demille’s film had missed the biblical boat in more than a few obvious ways. That love affair between Moses and pharaoh’s granddaughter was a whopper to be sure, typical Hollywood but poor Bible. But for me the very worst error was the central casting decision of Heston for Moses; Heston was tall, handsome, delightfully hirsute, big chested, every inch the heartthrob. The Moses I confronted in the biblical story was unlike Heston in nearly every way, but Heston, after the movie, would be identified with Moses for the rest of his life. And I also imagine that in the minds of many Americans, he embodied Moses for them, making the ancient shepherd the model of heroic action figure, something the Bible rarely if ever provides. The biblical story makes it absolutely clear that Moses should never have been played by Charlton Heston—Woody Allen, maybe, but definitely not Charlton Heston. Let’s look at the story again.

Moses, out of love for his own people, the Israelites, though he has been raised in the palace of pharaoh, murders a cruel Egyptian overseer, who is mercilessly beating an Israelite slave. Assuming no one witnessed his killing of the Egyptian, Moses soon learns that nearly everyone in fact knows what he has done. As a result, and out of fear of the pharaoh, Moses leaves Egypt, heading east toward Midian. Once there, hiding out to prevent Egyptian revenge, he meets a Midianite woman, Zipporah, the daughter of Jethro, they marry, and soon have a son whom they name Gershom, an odd name meaning “immigrant there.” Moses soon finds himself working in Jethro’s sheep business, and assumes he will remain in Midian, and is certain he is well rid of Egypt and its cruelties against him and his family and people.

But YHWH is not through with him yet. One day, while pasturing his sheep near the sacred and spooky mountain of Horeb, he sees a most peculiar thing, a bush on fire, yet not consumed. Being curious, he decides to go have a look. As if a continually burning bush was not enough, the bush proceeds to start talking, even knowing Moses’ name. “Moses, Moses, “the bush shouts, and the shepherd replies as any good Middle Eastern conversationalist would, “Here I am.” Though the author tells the reader that the voice from the bush is actually YHWH, Moses is not yet apprised of that fact. In the story, God is called both Elohim and YHWH, causing many scholars to assume the tale is out of the storehouse of the E-source of the Pentateuch; that may be so but has finally little bearing on how it may be read.

“Come no closer,” warns the bush, “Take off your sandals, because this place is holy ground.” Then finally God is revealed, saying, “I am the God of your ancestor, the God of Abraham, Isaac, and Jacob.” Realizing he was really hearing from the God of Israel, “Moses hid his face, because he was afraid to look at God.” Then, God tells Moses just why this strange confrontation is happening, letting Moses in on the most recent divine reflection concerning the problems of Egypt. “I have seen the misery; I have heard their outcry; I know their sufferings; I have come down to deliver them from the Egyptians; and I will bring them up out of that land into a good and wide land, one flowing with milk and honey, a country currently inhabited by Canannites, Hittites, Amorites, Perizzites, Hivites, and Jebusites.” The large problem presented by all these people already living in the land of God’s promise is glossed over in favor of Moses’ role in what is about to happen.

“The cry of Israel has come to me; I have seen how the Egyptians oppress them,” God repeats. I always picture Moses at this point in the tale, face down in the sand, fearful of catching a peek at God, and probably very glad that all of the pronouns uttered by that God up to now are first-person singular. Moses may be thinking, “Good idea, God. I am happy you are going to do something about that mess in Egypt. I am behind you all the way, way behind you!” But suddenly, the pronoun makes an abrupt change. “So, I will send you to pharaoh to bring my people, the Israelites, out of Egypt.” Well, there is a horse of a very different color! I am in Midian precisely to avoid Egypt forever, thinks Moses; why would I ever want to go back there, let alone figure out some way to get those people out of slavery? And so, Moses raises his first of five objections to God’s call to go to Egypt. “Who am I,” he whines? Oh, don’t worry about that, replies God. I will be with you, and as a sign that I sent you, when you get them out of Egypt, you may worship me on this mountain right here.”

That promise of God’s presence, however vague it sounds, might be OK, but that still does not solve Moses’s basic question of just how he is going to effect this grand escape. So, he asks another pressing question: “Who are you anyway? If I come to those Israelites, and am asked about your name, what shall I tell them? Do you have a name?” The bush puffs itself up to a full leafy height and thunders those famous words, “I am who I am. Tell them “I am” sent you.” And just what sort of a name is that? “I am who I am” means in effect “A=A,” a very good thing to know, but a formula devoid of any real content. Of course, theologians through the ages have made much of this peculiar “revelation” of the name of God, and to be sure it does reveal something, but also, I think, conceals much. In other texts of Genesis, God has been known as “shield of Abraham,” God of the mountains (El Shaddai),” among several other names. But this so- called name says nothing about who God is, where God is, or how God is to be understood. In short, I suggest that God is purposely obscure here with Moses, in much the same way that God is obscure when Moses later in the story demands to see God’s glory. No dice, responds God. This is all the name you are going to get, Moses.

Well, though the lectionary reading ends there, it simply cannot exhaust the tale of Moses and God at the bush, exactly because Moses is completely dissatisfied with this divine reply. “They probably will not believe me, “he cries (Ex.4:1) Do you have any tricks; people always are impressed by tricks. So God gives Moses some tricks: staffs into snakes, clean hands become leprous, water into blood. Take those carnival games, Moses, and get off to Egypt. But Moses is still not convinced, and now offers a bald- faced lie to escape this task. “ O, YHWH, I am not eloquent, neither in the past, nor now that you have spoken to me; I am slow of speech and tongue.” Given the later proof of Moses’s profound eloquence before pharaoh and the people of Israel, Moses is clearly stretching the truth in this fourth excuse. And God is not pleased. “Who gives speech to humans; who makes them mute or deaf, seeing or blind? Is it not I, YHWH? Now go, and I will be with your mouth and teach what you are to say.”

Yet, even now, Moses is not ready to answer the call of his God. “Choose somebody (anybody!) else,” he whines, and God is furious, offering to give Moses his brother Aaron the Levite, an apparently fine orator, who can speak for him. But for Moses there is no escaping the task he has been set by this commanding God. He will go to Egypt, even if God has to kick him in the right direction. 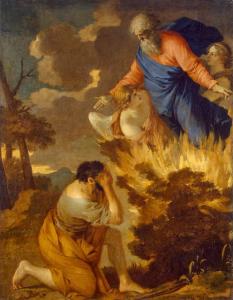 Moses is decidedly not Charlton Heston. He tries every way he can to weasel out of God’s call, but God is having none of it. Moses is much like those ancestors who have preceded him, the lying Abraham, the resentful and unyielding Sarah, the equally lying Isaac and the tricky Rebekah, and the wily and devious Jacob, and his clever beloved wife Rachel, less than perfect people all, yet the choices God has made to effect the divine will. Has anything changed over the centuries? We are all God has got, and weak and odd that we are, still God can choose us to act on behalf of the great God. Sorry, Cecil, but you really did miss the juice of this grand tale. It would be wonderful to have a movie that would present such a figure as the biblical Moses, but I will not hold my breath. Hollywood has its own purposes, and the Bible may not fit those very well at all.