After last week’s talk of the necessity of festival celebration right in the middle of the drama of Israel’s escape from Egypt, that drama heightens in intensity as the escapees, first feeling glad for their newfound freedom from the terrors of Egypt, soon are trapped in the wilderness, confronted by the Sea of Reeds (wherever that may be!) and pursued by the grand army of pharaoh. The ruler of Egypt, after allowing Israel to leave his service, has apparently awakened to the mistake he has made (Ex.14:5) and assembles a large army of chariots and rushes after the now terrified Israelites. Israel’s joy very quickly turns to horror as the thundering hoof beats of the chariots draw closer, forcing them ever nearer to the brink of the Sea.

Presaging their later grumbling on the wilderness, the people confront Moses: “Were there no graves in Egypt that you have led us to die in the wilderness? What have you done to us, leading us out of Egypt? …It would have been better for us to serve the Egyptians than die in the wilderness” (Ex.14:11-12)! Freedom is apparently not so easily gained after all, and the people are now extremely sorry that they ever listened to the prophet in the first place. Moses replies, as God’s prophets regularly do: “Do not be afraid! Stand firm! Witness the deliverance that YHWH will accomplish for you today; for the Egyptians you see today you will never see again” (Ex.14:13)! Words fully worthy of any action hero, yet in the space between vss.14 and 15, it appears that Moses has turned to YHWH for help with the unruly mob. YHWH’s reply, again a common divine refrain, is: “Why do cry out to me?” employing the verb regularly used when Israel shouts for God’s justice against their enemies. “Tell those Israelites to move!” And then YHWH admonishes Moses to “raise up your staff, and stretch your hand over the sea and break it open, so that Israel may go through on dry ground” (Ex.14:15-16).

It is important to note that the verb regularly translated as “divide” may also mean “break open” or “break through.” The famous image of “walls of water,” that certainly occurs in what follows, and was famously portrayed in Demille’s 1956 epic film, is not the only image that the well-known scene will offer to the careful reader. In fact, there are two quite distinct pictures of what happens at the Sea of Reeds. More important for the reader of the Bible are the echoes to be found here with YHWH’s creation of the world in Genesis 1. In similar fashion at the creation, God “separates” or “divides” (using a different verb) the waters above and below the great vault of the sky, in order to allow the “dry land” to appear (Gen.1:4, 6, 7, 9). The fact that YHWH is again acting on water in order to separate it to make dry land, a safe space for God’s people to live on and move through, is the literary connection of these two crucial accounts of the actions of God for Israel. The possible historical location of this body of water—never called the Red Sea in the text, but rather a Sea of Reeds—is not in the slightest significant. It is the recognizable work of God, prefigured in the creation that is crucial for us to realize and celebrate.

Also, just as in the accounts of creation in Gen.1 and 2, two quite distinct understandings of God’s work, so here in Ex.14 we find two quite distinct accounts of the miracle at the Sea. However, in the former case the stories are easily recognized as different, separated as they are in two chapters. But here in Exodus, the two stories have been laced together; yet a careful reading will yield a clear difference in the basic outline of the stories. It turns out that the “walls of water,” by far the more famous of the two tales, is hardly the only one we see. 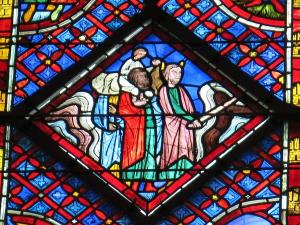 Ex.14:21 immediately offers a picture completely different from that of water walls. Following God’s express command, “Moses stretched his hand over the Sea, and YHWH with a powerful east wind, forced the Sea back all night, and made the Sea dry land; the waters were broken open.” Some historical critics have concluded that the last clause of vs.21, “and the waters were divided (or “broken open” in my reading) are a piece of the “walls of water” picture that another author presented for the scene. That may be, although if the word is translated “broken open,” the walls picture may not be so obvious. This portrait of an all-night tidal flow, fueled by YHWH’s use of a potent east wind is hardly the instantaneous magic of walls of water. Yet, it is important to note that neither the tidal picture nor the walls picture is any more or less miraculous; YHWH controls both scenic portraits, and it is only by YHWH’s power that Israel wins victory at the Sea over the Egyptians.

14:22 presents the familiar walls of water picture quite directly: “Israel went into the Sea on dry ground, the water being for them a wall on their left and right.” At 14:23, the Egyptians “went into the Sea after them,” creating a picture of the forces of Egypt rushing into the midst of the water walls on dry ground, the well-known picture fixed in our minds again by Demille’s epic. But 14:24 shifts us back to the tidal picture, when “at the morning watch,” YHWH in the pillar of fire and cloud, “looked down on the Egyptian army, and confused them.” The verb “confused” is fairly rare in Hebrew, being found in Ex.23:27, where God promises that the inhabitants of Canaan will be thrown into confusion to make Israel’s possession of the Land of Promise possible, in Joshua 10:10 when God confuses the enemies of Israel, making Gideon’s victory over them assured, and in Judges 4:15 when YHWH confuses Sisera, enabling Deborah’s victory over him. As one can see, it is a verb employed to indicate YHWH’s desire to make possible an Israelite victory. So it is here. I think the use of the verb in this context is important for a clearer understanding of what one of our authors may have in mind.

Ex.14:25 is often seen as a difficult verse, but the problems may not be so insuperable if the supposedly problematic verbs are read correctly. “(YHWH) removed the wheels from their chariots, so that they (the chariots) could not turn.” There is no need to change the text at all; chariots can hardly run without wheels. So, now we witness panicked and confused Egyptian charioteers, with all their chariots now disabled by YHWH; little wonder they cry, “Let us flee from the Israelites, for YHWH is fighting for them against the Egyptians!” Indeed!

Ex.14:26 describes how YHWH directs Moses to stretch his hand over the Sea again, “so that the water may come back over the Egyptians, their chariots and charioteers.” Moses complies in 14:27, and as a result “at dawn the Sea returned to normal (depth);” that seems to mean that the tide came back in. Now the NRSV reads the rest of vs.27 “As the Egyptians fled before it, YHWH tossed the Egyptians into the Sea.” I think it is more natural to read, since the tide has come back in, “the Egyptians fled toward it,” or “right into it.” “ Thus did YHWH toss the Egyptians right into the Sea.” If that is a possible reading, the scene is as follows: the tide has come back in, but because the Egyptians are confused and panicked, instead of fleeing away from the waters, they instead flee right into them and drown. The phrase “YHWH tossed them into the Sea” is thus a summary of the actions of YHWH in the entire scene.

I think the editor of the two scenarios has nicely joined the two pictures, making it sound almost like a single story. Yet, the “ walls of water” and the “all-night tide” are two different ways to paint the crucial and central action of YHWH on behalf of Israel. Whichever way Israel remembered the tale, the result is the same: on the west bank of the unnamed Sea Israel remained slaves, bound to pharaoh, but after the victory at Sea, they are destined to be the people of YHWH, headed to the Promised Land.

Of course, there remains the painful theological dilemma of all those drowned Egyptians. An early rabbinic story from perhaps the 4th or 5th century CE tells the following story in response. After Israel survived the victory at sea, and after Miriam had led them in a raucous chorus of celebration, the sound of their joy wafted up into heaven, where the angels of YHWH were moved to join the fun, dancing and singing with unabashed pleasure. Suddenly, a huge voice boomed from the clouds, “You dare to sing while my children are drowning!” Once drowning Egyptians are seen as God’s children, too, the story is called into the most serious question. 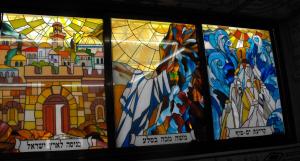