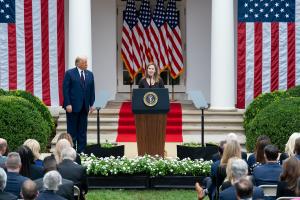 The nomination of Judge Amy Coney Barrett by President Trump to fill a place on the Supreme Court, made necessary by the death of Ruth Bader Ginsberg, has raised the usual firestorm of conflict in our sharply divided nation. Judge Barrett is an avowed conservative, as her many legal writings demonstrate clearly. The fact that she clerked for Antonin Scalia, the most famous of the recent conservative members of the High Court, and has consistently claimed that she follows his judicial philosophy of “textualism,” sometimes termed “original intent,” in most cases, suggests to many of society’s more conservative citizens that, at last, the Supreme Court might overturn several issues that earlier courts have addressed: abortion rights, LGBTQ rights, and the Affordable Care Act—so-called “Obamacare”—among them. And for more liberal/progressive citizens her eventual confirmation to the court by the Republican-controlled Senate, a confirmation that appears almost certain, though made slightly doubtful by recent COVID-19 infections in three Republican Senators, along with the President and his wife, her elevation to the land’s highest court would be an unmitigated disaster. Whether that disaster will occur with her appointment, I do not care to predict. It might be said that other dire predictions of the “certain” results of Supreme Court appointments, both by Republican and Democratic Presidents, have not always turned out as predicted. Still, it must be said that Judge Barrett’s appointment would surely make a 6-3 split in the court more likely, and would move the court to the right on many issues.

My interest in this essay is to reflect on the fascinating, and finally untenable philosophical approach to her reading of the law, that “textualism” noted above. A recent article in the Los Angeles Times by Victoria Nourse, Ralph Whitworth Professor of Law at Georgetown University, approaches the problem well. She uses the example of the court’s now nearly ten-year struggle with the Affordable Care Act to determine whether in fact it is constitutional or not. Two significant challenges to the law have come to the court, and though both challenges have resulted in certain changes in the scope of that law, to date the law as a whole has been found to be constitutional and is thus still in force. Nourse summarizes the 2015 case, King v.Burwell, as a parade example of the frank absurdity of “textualism,” as applied by Justice Scalia, in action. The Affordable Care Act is a 900 page behemoth that few, one imagines, have actually read, but in the 2015 challenge it was noted that “the text of the law used the phrase ‘by the State,” which the opponents argued did not allow for federally run health exchanges,” a reading that was ridiculous given the full context of a law designed precisely to create and allow federally run exchanges! By a 6-3 majority the court ruled that such a tiny “clerical error” should hardly invalidate an entire statute, but Justice Scalia, using his beloved textual analysis, voted to dismantle the entire act due to what he called a “scrivener’s error.” Such a reading is patently ridiculous.

Such a reading is quite obviously a fundamentalist one, a reading that assumes that every word of a text, despite its wider context, despite its legislative history, makes the assumption that every word bears equal weight with every other word, and that the “original intent” of every word must be determinative for the validity, the legality, the constitutionality of every statute considered. Such readings in the real world bear little significance, however much the practitioners of “textualism” like to claim that they do. The approach founders disastrously on several counts. First, the “intent” of an original writer is largely unrecoverable. What did Jesus mean when he said, “Love one another?” How is that love to be expressed? Is it more loving to confront evil or more loving to allow it to continue unchallenged? Is it more loving to divorce a spouse than to stay together in pain and anguish? The several meanings of “being loving” must by necessity be teased out over the long stretches of human interaction; only then can a fuller appreciation of what Jesus may have had in mind by achieved. And even then we cannot be certain what the original intent of the words may have been.

The second problem with “textualism” is that it fails the test of context. Approaching a text with this philosophy allows the reader to pick “a word here or there to reach the results the interpreter prefers,” according to Nourse. So it is with biblical fundamentalists. It is well-known, for example that the Hebrew word employed by Isaiah 7:14, translated “virgin” by the KJV, is plainly not the meaning of that word. There is a Hebrew word for “virgin,” but this word is not found here. Nevertheless, when Matthew quotes this passage—from the Greek translation of the Hebrew Bible—he uses a word that can indeed, though not always, be rendered “virgin.” A Christian doctrine has been formulated on this shaky linguistic foundation, but a “textualist” is free, she thinks, to play with the language in this way to reach the desired conclusion. Such a reading does not take with any seriousness the complex linguistic changes that occur over time and as the results of meaning movements between languages. In the legal world, the continual use of a law in multiple contexts, how that law actually functions over time, has a large role to play in its interpretation in changing circumstances.

Nourse neatly summarizes the problem: “Textualism, allied with judicial contempt for legislative power (that is, for those who actually write and administer the laws) could put every federal law that conservatives oppose in danger.” Precisely! Legislatures hash out the fine details of the nation’s laws, and should not be subject to the whims and piques of bizarre construals of language by judges who take no consideration of the vast efforts of those who argued for and against that language in the attempt to address specific questions that the society has raised. “Textualists” claim to look at the “ordinary meaning” of texts, but, as Nourse says, “ordinary people do not read 900-page health care statutes, and no ordinary person, or member of Congress, or linguist for that matter, thinks you can understand “Moby Dick” by pulling out a word and throwing the rest in the ocean.” Textualism, just like biblical fundamentalism, is a sham procedure, based supposedly on deep love for the law, or the text, but in reality treats the law or the Bible as an object on which any reader may project any notion that happens to pop into their head. 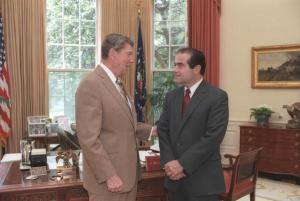 It is not Barrett’s conservatism that should bother us; it is her foolish embrace of “textualism,” that in the end is not actually an approach to reading and evaluation at all, but is a trendy way, the way of her mentor Scalia, of getting to whatever she has decided—on other unnamed grounds—to affirm; the text is merely a red herring, used to announce a preconceived conservative reality. And that, like an unvarnished biblical fundamentalism, should be very concerning indeed.

Reading the Bible while White
Religion Prof: The Blog of James F. McGrath
Related posts from The Peripatetic Preacher 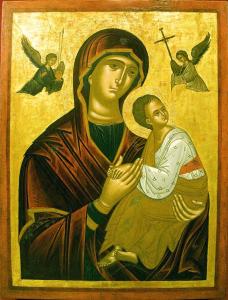