Elisha, heir to the prophet Elijah, is an altogether different figure than his mentor, at least as he is presented to us in the Second Book of Kings. Though Elijah is of course remembered as a man of power, a prophet of YHWH able to provide miraculous jars of grain that never are exhausted, able to raise the dead, and able to defeat hundreds of Baal prophets with a simple prayer for YHWH’s intercession, he is also characterized by his deep concerns for injustice against the oppressed of the land. To the contrary, Elisha shows little such interest in such things; he rather primarily performs works of magic, from floating ax heads to curing leprosy to assaulting children who make fun of his bald head! There appears to be little recoverable history behind these tales of magic; Elisha sounds rather more like Pecos Bill or Babe the Great Blue Ox than a typical biblical prophet. To be sure, the prophetic journey between Elijah of Tishbe and Elisha of Abel- meholah is a very long one, moving between one who focuses on ethical injustice to one who primarily does marvelous tricks.

However, when Elisha accompanies his mentor, Elijah, as the latter faces the end of his ministry, Elisha longs to follow in his master’s footsteps, according to 2 Kings 2. Elijah apparently sets a stern test for his would-be successor, perhaps to see whether or not Elisha is worthy of the prophetic mantle. Just before YHWH was about to “take Elijah up to the sky in a whirlwind” (2 Kings 2:1), the prophet tells Elisha that YHWH has demanded that he, Elijah, leave Gilgal and go to Bethel, and he commands Elisha to stay put. This is a very short trip of a few miles only, but Elisha refuses to stay in Gilgal and comes with Elijah to Bethel, the central sanctuary of the northern kingdom of Israel and the site of Patriarch Jacob’s famous dream of a ladder connecting earth and sky, a place where he “saw YHWH.” When the two prophets arrive in Bethel, a “company of prophets” (literally “sons of the prophets”) appear to Elisha and say, “Do you know that YHWH will take your master away from you today” (2 Kings 2:3)? Elisha replies, “Yes, I know! Shut up!”

The tenor of both the prophets’ question and Elisha’s answer to it sounds harsh and combative. The band of prophets, perhaps a group of ecstatic worshippers, living in some sort of encampment away from the town, sharply questions Elisha’s knowledge of what is about to happen to the great Elijah. It may be their way of adding to Elijah’s own test of the successor by implying that any real prophet would of course know well what is about to happen. Elisha quickly answers that he does indeed know all about YHWH’s intentions to take Elijah away from him, and he adds a tough rejoinder to these babbling holy men, telling them to just shut their mouths. Elisha is here pictured as thin-skinned and brittle, a man both angry and possibly reluctant to witness what is about to happen to Elijah.

This scenario occurs twice more with first an identical interaction between Elisha and another prophetic band. Elijah demands that Elisha not accompany him now to Jericho, again a very brief trip, and finally to the Jordan River. At Jericho Elisha again rebukes a band of prophets by claiming that he well knows what YHWH is about to do and that all of them should simply shut up. When the two prophets reach the Jordan, the place where Israel first crossed over into the Land of Promise after YHWH had made the Jordan River divide to allow the people a dry-land access to their new home, echoing the actions of YHWH on their behalf at the Sea of Reeds, this time fifty prophets have followed them but now stay at some distance from the two figures as they stand near the Jordan. All of them, along with Elisha, witness the final act of Elijah as he rolls up his prophetic cloak, or mantle, and strikes the Jordan with it, bringing about the parting of the waters, allowing the two prophets to walk through the river on dry ground.

When they reach the other side of Jordan, Elijah asks Elisha, “Tell me what I may do for you, before I am taken from you” (2 Kings 2:9)? Elisha replies immediately, “Please let me inherit a double portion of your spirit.” This answer might be understood in more than one way. It could be seen as a humble request for Elijah to give Elisha twice what he has had in his prophetic ministry, because Elisha, seeing himself as inadequate in the face of Elijah’s greatness, must have twice what the master has had if he is to fulfill the hard work of prophecy. Or, it could mean that Elisha has larger designs on the work of prophecy, sees himself as superior to Elijah, and requests twice the power, twice the spirit, that Elijah has had, suggesting that Elisha pictures himself as greater than his master has ever been. Given Elisha’s sharp rejoinders to the two bands of prophets, how he knows precisely what YHWH is about to do and telling them to shut up, I see Elisha as ready and more than able to supersede the work of Elijah.

“You have asked something very difficult,” replies Elijah to Elisha’s request. Is Elijah’s reply a kind of rebuke of Elisha? Did he expect Elisha to ask for something different? In any case, Elijah answers with a most peculiar test: “If you see me taken from you, let it be for you thus, but if not, then it will not be” (2 Kings 2:10). That is, when I am taken away by YHWH, if you see my going, the double portion of my spirit is yours, but if you do not see me, then you will not have that spirit. Suddenly, a chariot of fire, drawn by horses of fire, flew between the two prophets, and Elijah went up to the sky in a whirlwind of flame! “Elisha saw and he cried out, ‘My father, my father! A chariot of Israel and its horses!’ When he could no longer see him, he grabbed his clothes and ripped them into two pieces” (2 Kings 2:12). The odd scene seems to suggest that Elisha watched intently while Elijah rose into the sky on the whirlwind, accompanied by the flaming chariot and horses, crying out that Elijah was his father, announcing to Elijah and to the watching fifty prophets that he was indeed worthy to receive the requested double portion of Elijah’s spirit. Nevertheless, Elisha’s act in response to the dramatic events is surprising; he tears his clothes in the act of mourning. Is this mourning for the disappearance of his master? Or is it mourning for the fact that he has now become the heir of Elijah along with all the struggles and pain that inevitably accompany the life of a prophet? Elisha may demonstrate the vast power of Elijah, but he at the same time inherits the lonely and demanding life that any prophet of Israel must endure.

Elisha, I suggest, mirrors the life of any who would be a follower of God. When I was a much younger man, living in the first blush of my ordination to the pastoral ministry, there seemed little I could not do or accomplish. I could preach moving sermons; I could teach the riches of the Bible; I could provide comfort to those who grieved. I all too soon discovered that not all who heard my sermons were moved, but instead were angry or at best disappointed or bored. Also, my teaching was too often less than clear and less than helpful. And my attempts to comfort were too often weak and foolish. I wanted a double portion of those who had gone before me, but soon discovered that I barely had enough of God’s spirit to perform ministry at the barest of minimums. Once I experienced real ministry, like Elisha, I was regularly tempted to tear my suit in frustration and despair.

Be careful what you ask for! The request for a double portion of the spirit of some mentor or the other may lead to a mournful and painful frustration. Elisha, rather than attempt to model his work on that of Elijah’s may have done far better to search more deeply for his own spirit by which he might become a prophet of God. God chooses each one with her own gifts and graces for the work of God, not one who has but a pale echo of someone else’s gifts and graces.

Mark’s portrait of the mysterious Transfiguration scene offers a rather pathetic Peter who upon seeing the dazzling figure of Jesus, speaking with Moses and Elijah on that mountain, babbles incoherently his desire to follow his master by erecting tents for each of the three on the mountain, apparently in order that everyone who witnesses this event might stay in the moment of wonder forever. Jesus has other purposes in mind than constant ecstasy on a mountain; ministry involves interaction and confrontation as the remainder of Mark’s gospel will demonstrate. And this same Peter, confused until the end, will eventually deny that he ever knew this prophet he has claimed to know and desires to emulate at all. Like Elisha, the final scene we see of Peter in the gospel of Mark is weeping alone by the fire, just as Elisha mourns and weeps after trying to be like Elijah but at the end not being exactly capable of doing so. Peter, like Elisha, and like many of us who would be followers of God, should be very careful what we ask for. 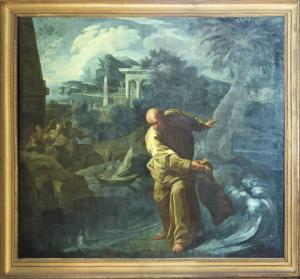 January 25, 2021
Racism: Guilt and Culpability The Peripatetic Preacher
Next Post