I just this day (April 8, 2021) concluded a Zoom teaching session, the last of five sessions, with 12 pastor/preachers in and around the area of Amarillo, TX. For those of you unfamiliar with the geography of the huge state of Texas, this area is known as the panhandle of the state. It itself is a huge stretch of mostly flat land, encompassing Childress in the southeast to Dalhart in the northwest. From the latter to the former is about 200 miles, to give you some idea of the size of the place. The town of Amarillo, a city of some 200,000 souls sits squarely in the middle of this so-called panhandle, though I have always wondered why the area further south and further west, from Odessa to El Paso should rather be called the panhandle of Texas, since a map sure makes that piece of the state look more panhandle-like. But who am I, a long-time Texan, but now a transplanted citizen of Los Angeles, to question such a well-worn designation?

This class of preachers in fact included members from the aforementioned Childress, and though none were from Dalhart, one was pastor at Borger, a small town north and east of Amarillo, while another was from Stinnett, a very tiny village even further north. Because these preachers were all United Methodist (our one Roman Catholic had to leave the class two sessions ago), many of them had experienced leadership of churches in many more panhandle towns; we United Methodists tend to move regularly from one church to another. In fact, one of the class members announced his move this June from a town north of Amarillo to El Paso, a nine-hour drive, though still within the boundaries of the Northwest Texas Annual Conference of the United Methodist Church. In reality, that annual conference, the areas that divide our denomination, each led by a Bishop, also includes the entire state of New Mexico! Thus, the conference spreads from far western New Mexico all the way to Abilene, TX, a distance of perhaps 700 miles, and from the northern tip of the panhandle to El Paso, a trip of perhaps 500 miles.

I give you a few of these cities and distances to indicate a painful reality of the work of ministry; it is a lonely job! Literally hundreds of miles separate these clergy, and the work of ministry is long and arduous, making personal connections with other clergy very difficult. The lovely gift of Zoom technology, along with its obvious shortcomings, is to bind clergy together across the miles. Each class session demonstrated their hunger for connection, despite their differences in style, preparation, and modes of pastoral/preaching work. We all were grateful for Zoom, without which we simply could not have been together at all. During the pandemic, Zoom made it all possible for us to hold our teaching sessions, and to include all those panhandle preachers, and me, the LA outlier, from 1000 miles away.

I taught at Perkins School of Theology in Dallas for 33 years, the final 28 of which were spent primarily as a teacher of homiletics, that $100 word that means preaching. I led during those years over 50 introductory classes of preaching, along with at least 50 more classes of advanced work in preaching. I listened to well over 3000 student sermons–twice!—during my time as teacher. Also, I led at least another 50 continuing education events of various sorts across the country and world. In short, I have taught the act of preaching for a very long time and with a large number of in-training and active clergy people. And now at age 74, I am still at it. 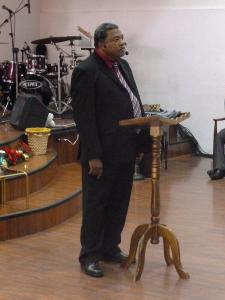 Why? Does there remain any real need in our increasingly secular world, with the obviously declining influence of the church, to attempt to help pastors with their preaching? You would, of course, assume that I would answer the question with a loud “yes,” given what I have just told you about my life’s work. However, I should add a caveat or two. I readily admit that my life as a teacher of preaching was not always a pleasant one; not all of those 3000 sermons were very good. In fact, I have to say that more of them were, as I understand the task, rather more mediocre than life-giving words. I spent more than a few nights wondering just what good I was doing, if any, by attempting to help would-be preachers to speak with clarity and force the word of the gospel of God. I rarely met a student or pastor who was not convinced that she/he had been called by God to preach, but I did meet more than a few who did not possess the multiple skills needed to do the task well. Of course, I long ago gave up trying to point to this or that student as a “good,” even “great” preacher, since what I found painful to hear, others found genuinely life-affirming and deeply valuable to them. After all, I was only one set of ears, albeit with long experiential training, and my ears had been acclimatized to hear sermons in certain ways, ways clearly proved again and again to be quite unlike those of congregations who listened gladly to my former students, much more gladly than I had been able to do.

This most recent preaching group was finally no different than my earlier experiences. Each member of the group was far more affirming of their colleagues than I was, because they well knew that the task of every Sunday preaching, something I have not done for nearly 50 years, is flat hard work, requiring study, meditation, prayer, all done in the midst of the vast demands of pastoral work. Easy enough for me to cavil at a weak beginning, a confusing transition, an off-kilter illustration, an ending that goes on too long. When other weekly preachers listen to that sermon, they hear a called soul struggling to speak the word of life week after week, and knowing all too well the various roadblocks that pastoral ministry throw up to impede the way toward satisfactory preparation. None of these panhandle preachers has a large church staff to take the load off their shoulders, opening the way to precious time for study, reflection, and writing. One today said that when he arrived at the church this morning, before our 5-hour session, three repair people were waiting to get inside to look at the refrigerator, the sanctuary carpet, and the all-important air conditioner compressor; after all, summer is coming, and the panhandle can be at times as hot as anywhere in the nation. This pastor was the point person for all of that. Yet, he knew Sunday was coming again, and he needed to carve out some time to prepare.

Another of the members of the class is battling cancer, having to take weekly chemotherapy treatments, yet maintaining his pastoral/preaching work through it all. Still another is a single woman in a small town, doubly isolated by her gender in a generally patriarchal world, both in her congregation and among her clergy colleagues. She still stands weekly to preach. What it finally comes down to for me is that all these folks inspire me to offer what little I can, out of my storehouse of preaching experience, to enable them to perform this crucial job perhaps a bit better.

I do still believe this preaching thing possesses immense value, even in our 21stcentury world. I will never forget the time I was preaching in a small West Virginia church, when an elderly woman greeted me after the service. She graciously thanked me for my sermon, saying it was a valuable thing for her to hear; she said she did not often hear what she called a “decent” sermon. She had been a member of that church for over 70 years, and told me that during those years, she had had well over 40 pastors—young ones moving on up and older ones ready for retirement, as she put it. She wondered put loud whether that church would ever get a person to stay more than a few years as their pastor. I surely had no answer for her question, knowing all too well how the United Methodist Church moves its clergy around. But I did ask her, “Why do you keep coming, if you find the preaching you hear in the main dissatisfactory?” Well, she replied, it is my church after all, and besides, “I come, because I hope against hope that there will be this Sunday a word from God for me.” And there, in a nutshell, is why I am still teaching the art of preaching. And that job remains one that was in part designed, laid out, especially for me, I think. And each time I do it, I thank God for the chance.

April 6, 2021
Remembering the Holocaust The Peripatetic Preacher
Next Post