When moving through the long and rich narratives concerning Samuel, Saul, and David, we are forced to skip great swaths of the tapestry that make up the astonishing tale. I remain very sad as I witness what the collectors of the lectionary feel they must do to give the preacher and her listeners some semblance of the wholeness of the work. Unfortunately, no preacher can address the tale in full, and few listeners would sit week after week to hear the whole thing, however wonderful some of us Bible nerds might savor such an experience. But perhaps better some portions than nothing, so today we address the choice of the very young David as the new king of the land after Saul has been viciously deposed from the role, at least in the perspective of the bilious Samuel, whose desire to be rid of Saul boils over even into a misuse of YHWH to reject Israel’s first king.

In 1 Samuel 8, Samuel has humiliated Saul, who has been forced to offer an appropriate sacrifice before battle, precisely because Samuel has failed to appear to perform the rite, though he himself set the time that Saul must wait for his coming. He does not come, so Saul offers the sacrifice. The very minute the king strikes the torch to the altar, Samuel appears, a most suspicious occurrence, causing anyone to wonder whether or not the cruel prophet was lurking nearby the whole time, simply awaiting the king to act. In any case, Samuel uses the event as an excuse to remove Saul’s future dynasty, claiming that his actions are a betrayal of the command of YHWH, though YHWH had absolutely nothing to do with the original command made only by Samuel (1 Sam.10:8). Here in 1 Sam.15, the prophet goes a step further, saying that YHWH has demanded that Saul “obliterate completely” (one possible translation of the Hebrew cherem) the Amalekites, who impeded the Israelite escape from Egypt centuries before. Saul sets out to do exactly that, utterly defeating the enemy people, but determining that instead of their thorough annihilation on the field of battle, he will take the very purest of animals, along with the Amalekite king, and offer them in a grand sacrifice together on the hill of Gilgal.

But Samuel meets the king, dragging the beasts for the ritual slaughter, and the king, and announces that Saul has frankly disobeyed YHWH by not doing the slaughter directly after the battle. There is no place in the tradition of cherem that says clearly that such a ferocious act must be done in such a way; the annihilation must be done, but nothing says it cannot be done in the way that Saul had decided. But Samuel once again uses YHWH to assault the king for disobedience, when in fact Saul has in no sense disobeyed YHWH. However, he has disobeyed Samuel’s particular interpretation of the act of cherem, and at least according to Samuel that is more than enough to strip the kingship from Saul. And so Samuel does, and Saul is reduced to a pathetic figure, whining about his sin, begging that Samuel accompany him to the place of sacrifice. In the midst of all this prophetic chicanery, Samuel claims that “YHWH has sought out a man better than you.” This must be seen as a prophetic bluff, since nothing has been decided about a replacement king. Nevertheless, after leaving Gilgal, Samuel heads for the farming community of Bethlehem, a spot on the fringes of the tiny Israelite lands, to seek a new king.

Samuel is sent there by YHWH, who accuses the prophet of excessive “grief” concerning Saul. This should not be construed as some sort of sorrow over the tragedy of Saul’s fate, but rather as a command for Samuel to cease his maudlin reactions to his own poor choice of king. “Go to Jesse, the Bethlehemite, for I have seen for myself a king among his sons” (1 Sam.16:1). But the so-called powerful and intrepid Samuel responds in an overtly pathetic whine, “ How can I go? If Saul should hear, he will kill me” (1 Sam.16:2). This seems a strange comment from the prophet who has just angrily deposed Saul from the kingship, and who in addition also murdered the Amalekite king at Gilgal, denying that right to Saul as victor over those enemies. YHWH replies with a ruse that will give Samuel cover. He will simply bring a young calf to Bethlehem, claiming that he has come for sacrifice and that all of Jesse’s sons must come to the altar with him. 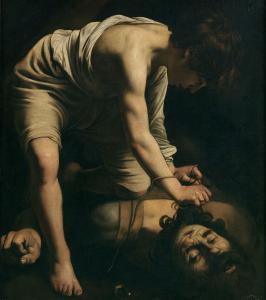 And so they do, arraying themselves in order of their birth, Eliab being the eldest. Samuel takes one look at the eldest and tallest of the sons, and thinks, “Ah! Before YHWH surely stands the anointed one” (1 Sam.16:7). Perhaps no comment could suggest any clearer just how unreliable a prophet Samuel actually is! He has already made a near fatal mistake in his selection of Saul, convincing himself that he was directed by YHWH to do so. He is now ready to repeat his own mistake by being impressed by the appearance of the man, by the height of his stature. Any reader who imagines that Samuel is YHWH’s infallible spokesperson has simply not read the story with care. “YHWH sees with the heart (or “into the heart” in the more traditional reading), but it is plain that Samuel does not.

None of the seven sons will do, the old prophet determines, and asks Jesse if he has any more sons. “There is a youngest,” says Jesse, “and, look, he is tending the flock” (1 Sam.16:11). It is interesting that few translations include that famous Hebrew interjection, hineh, in their readings. This word is often translated “lo” or “behold.” In effect, it is used as a pointer for a change of perspective in a story. We must turn from the seven brothers as potential kings to the most unlikely candidate, the shepherd boy, David, and the “look” demands that we make that abrupt and unlikely turn. And thus David enters the scene. But note how the narrator first presents him to us: “he was ruddy (red complected), with fine eyes, and very good to look at” (1 Sam.16:12). In other words, the storyteller demands that we do what we have just been warned not to do! We are to see as YHWH sees, not as Samuel sees. Alas, we humans rarely do, judging our siblings by looks and not by character or actions. Also, David’s unique and handsome features will cause him and Israel no end of trouble as his tale unfolds. In short, there will be very few ways in which David will be “better” than Saul, despite what the wizened and churlish prophet had promised.

So, where are we in the tale after this complex scene? There are now ostensibly two kings in Israel, the very public and experienced Saul and the very youthful and unknown David. History has shown again and again that there can never be two leaders of a country for long; we just know that strife between the two will soon enough ensue. And what are we to make of Samuel? His own rejection by the people, and the rejection of his wastrel sons, and thus his dynasty, have led him to the extreme measures of ridding himself of Saul by the most clandestine and mendacious ways. Samuel is simply not to be readily trusted as YHWH’s prophet, no matter what traditional readings of the story have suggested. So, just what is this storyteller up to? He is attempting, I would suggest, a very delicate and difficult balancing act. He is telling us the tale of Israel’s early change from judgeship to kingship, and he is trying to do so by speculating on just what YHWH has to do with it. Is all this a plan of YHWH or is it rather a complex series of human interactions, interactions fueled by characters all of whose motives are mixed and slippery, difficult of a clear discernment? Or perhaps closer to the mark: the tale is a mixture of both, human mixed motives and divine interactions along the way? Is this not the same conclusion that we religious moderns might draw when we examine the ways that our world is to be understood and explained? 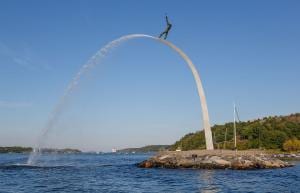