After David’s capture of Jerusalem from the Jebusites, and his appropriation of the city as his new capitol city, he senses the need for a religious symbol with which he may further unite the disparate tribes of the previously scattered people of Israel. No better symbol may be found than the fabled Ark of the Covenant. The Ark has fallen out of the long story of the fall of Saul and the rise of David. As far as we can see, Saul found scant use for the Ark, despite its mysterious and fabled power, but David knew that it was just the thing he needed to announce to all Israel that he was king under the aegis of YHWH and YHWH’s potent physical symbol, “the Ark of God, over which the name of YHWH of the armies (was) enthroned on the cherubim” (2 Sam.6:2). It was precisely this name that was given the Ark at its last failed use in battle against the Philistines, who captured it and held it for seven months. Unfortunately for them, it causes no end of trouble, denigrating their own gods and bringing foul tumors among them as well. After the Philistines in desperation sent it back to Israel it remained in Kiriath-jearim for some 20 years. David located it there and made ready a huge and colorful procession to bring it up into Jerusalem.

But his plans were thwarted by a furious YHWH. David had made careful and elaborate preparations to carry the Ark into the city, choosing a “new cart,” one that had never been used to bear the sacred chest. And he had chosen 30,000 picked warriors to add weight and majesty to the procession. Abinadab, the long-time keeper of the Ark, designated two of his sons, Uzzah and Ahio to drive the cart and to protect it as it bumped its way toward the City of David. Preceding the sacred box “David and the whole house of Israel were playing before YHWH with all their might in song on lyres and tambourines and castanets and cymbals” (2 Sam.6:5). It was a huge din of sound, designed to energize the assembled crowds on the city’s ramparts and to bring added glory to the new king by means of the Ark.

But sudden and unexpected disaster struck. One of the oxen leading the cart slipped, and Uzzah reached out to steady the Ark, lest it fall into the dirt. “YHWH’s wrath flared against Uzzah, and God struck him down there for reaching out his hand to the Ark, and he died there near the Ark of God” (2 Sam.6:7). This terrible scene recalls the fury of YHWH long ago when someone dared even look into the Ark, leading to the deaths of 30,000 Israelites (1 Sam.4). David’s well-wrought plans are in shambles; YHWH is not playing along with the king’s designs for power. In fact, just as YHWH’s anger is kindled, so does David’s anger appear (the verb is the same) “because YHWH had burst out against Uzzah” (2 Sam.6:7). We need not search this archaic story for ethical considerations; the Ark possesses magic powers not subject to any sort of human manipulation; peer into it or touch it and you will die! The famous scene from the first “Indiana Jones” movie, when the evil Nazis try to use the Ark for their own nefarious purposes, and suffer horrendous deaths as a result,  neatly captures the magic found in this tale. But the human response by King David to YHWH’s fury is clear; he is frustrated by YHWH’s refusal to play along with his plans for the Ark and now must wonder if he will ever be able to bring the thing into his newly minted capitol.

But David does not give up, but turns to a plan B. He takes the Ark to Obed-edom, a man from Philistine Gath, to watch from a safe distance just how the man will fare with the magic box near his farm. After three months, it is told to David that the man has in fact prospered as a result of his proximity to the Ark, and so David resolves to try again to bring the box to Jerusalem. This time, David takes further precautions against YHWH’s possible anger. After just six steps of the vast procession, all stop while the king himself sacrifices a fatted bull (2 Sam.6:13). And in addition the king “was whirling with all his might before YHWH, dressed in a linen ephod” (2 Sam.6:14). A linen ephod is a skimpy loin cloth, and anyone whirling about wearing one is likely to reveal his private parts, as Michal accuses her husband of shamelessly doing later in the story. Of course, it hardly lessens the power of the scene portrayed to picture David, the young and battled-hardened warrior, stripped nearly naked and dancing furiously in rapturous praise of YHWH, and viewed with wonder by the men and women of the city. All in the procession were shouting, and the entire throng’s noise was pierced by continuous blasts from the sacred ram’s horn.

Upon entering the city in triumph, David carries the Ark straight to the sacred tent which has been readied to house the object until a more permanent structure can be built for it. In the next chapter David imagines he will build an appropriate temple for the Ark, but learns from YHWH, through the agency of Nathan, that he will not be allowed to do so. Directly after ensconcing the Ark in its tent, David acting now both as king and priest, magnanimously crowns the day with gifts of food for all his people. In this way, David has demonstrated his kingly power, his priestly gifts, and his symbolic ability to feed his people. David now is truly the king of Israel, protected by YHWH’s Ark and buoyed by the love of his citizens.

However, one of those citizens is enraged at the king’s actions. His wife, Michal, daughter of Saul, scorns the actions of David in scathing language, a language born from his long neglect of her, and his well-known proclivity for multiple women. Michal accuses David of “exposing himself to the eyes of his servants slavegirls just like some disgusting fellow would expose himself” (2 Sam.6:21). David rounds on the hapless woman, claiming that he was dancing for YHWH, and cares nothing for what anyone says about it. In the midst of the speech, however, David cannot resist flaunting his new-found power in Michal’s face: “Before YHWH,” he shouts, “who chose me instead of your father and instead of all his house, to appoint me prince over YHWH’s people, over Israel” (2 Sam.6:21). The story of their broken relationship ends with the nasty observation, “And Michal daughter of Saul had no child until her dying day” (2 Sam.6:23). David discarded her earlier in the story, marrying her off to Paltiel, who loved her dearly, but then David ordered her back to the palace, only to avoid her completely until she died. She had served her purpose to cement Saul’s house to David’s, but he now has no further use for her now that he has consolidated his power over the whole land.

This story is a darkly political one with David using the Ark of YHWH and even his abuse of Michal as signs that he is now the only king. Those who imagine that only in the modern world do we discover political machinations among our would-be leaders have not read their Bible! David has had his sights set on the throne of Israel for some time, and has now achieved his goal. Unfortunately, as we shall see, his hold on power is hardly assured; we will witness his own self-destruction in one of the Bible’s most glorious and most terrible stories. 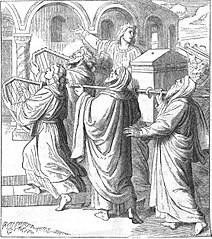 What's Going To Happen to the...
Clint Schnekloth
Related posts from The Peripatetic Preacher