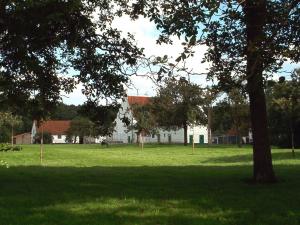 In the grand book of Genesis, that ancient record of broken families and grounded hope, the creation of human beings is quite literally rooted in the soil. In the second story of creation, according to most scholars by far the older of the two offered in the first two chapters, “YHWH Elohim formed (employing a verb often used in connection with artistic creation) ‘adam from the dust of the ground, and breathed into its (there is as yet no gender in the first creature) nostrils the breath of life, and ‘adam became a living being” (Gen.2:7). According to this author, you and I are quite specifically creatures of the soil. This connection is made even more explicit in the later story of the murder of Abel by his brother Cain. After the killing happens in the field, among the crops and t he soil, YHWH asks Cain about the whereabouts of his brother, and Cain lies egregiously, “I don’t know! Am I that man’s keeper?” using the word “keeper” as a sort of guard or trainer. Cain implies that whatever has happened to Abel it is none of his business or interest. YHWH’s reply is blunt and filled with pathos: “What in the world have you done? Listen; your brother’s blood is crying out to me from the ground” (Gen.4:10).

The pun in Hebrew found in that verse is rich, delightful, and completely untranslatable into English. The Hebrew word for blood is dam; the word for human being is ‘adam; the word for ground/soil is ‘adamah. In other words, the verse says: the dam of the ‘adam is crying from the ‘adamah. Once again, the author connects us quite directly with the soil. We are soil creatures one and all. This is hardly surprising, since the culture out of which these memorable phrases arose was almost completely an agricultural one. The ancient Hebrews were surrounded by fields and soil and ground, and lived on that soil, were nourished and kept alive by what it brought forth for them. Just as they were daily products of the soil, so they were imagined to be exactly contiguous with it, one with it, an inextricable part of it.

The great majority of us have a very difficult time making such connections. We are born in clean hospitals, kept alive by primarily packaged foods, and kept away from the dirt and dirty things. Most babies try their hardest to eat the soil when given a chance, but are quickly disabused of such a thing by horrified parents. “Dirty” is one of the first prohibitions we learn as children, and because that is so we are necessarily separated from this soil-creature connection. I am a classic instance of this separation. Though I was born in a small town, surrounded by Indiana farms, I had absolutely no relationship to anything of the farm, save the patch of garden that my great aunt Ora kept in her Des Moines backyard, which I sampled during several summer trips. The older I got, the further I was removed from the soil, nor did I think about that soil at all.

My wife, Diana, and I are on our first road trip following the easing of COVID restrictions. As a portion of that trip, indeed, as the ultimate purpose for it, she and her two sisters decided for the first time to visit some land in Beaver County, Oklahoma, that has been in her family for three generations. Beaver County is in the Oklahoma panhandle, that strip of land that borders Texas to the south, New Mexico to the west, and Colorado to the northwest. The Oklahoma panhandle is known for its wide-open spaces, its huge farms and ranches, and its fiercely independent people. Though it represents a large land area, the most recent census indicated barely 28,000 persons lived there in the three counties. The area was shaped by the Missouri Compromise of 1845, when Texas joined the union as a slave state. By law, no slaves were to be held north of 36 degrees 30’, hence the panhandle was a free territory. It was for over 50 years known as “No Man’s Land,” electing late in the 19th century a governor and a full legislature to govern the territory. However, in 1907 it was joined with the new state of Oklahoma and entered the United States. That long period of open and unconnected territory had a significant influence on the character of the people even in our century, and due to its great distance from the state capitol and its comparative isolation from the larger population centers, it has long gone its own way.

The three sisters and their husbands travelled from Colorado Springs to near Turpin, Oklahoma, to meet the farmer who has farmed their land for at least two generations. Jim Watson, 81, and his son, Kent, 44, are the lead farmers for the land owned by Diana’s parents, and purchased by her grandparents during the Great Depression. We learned that those grandparents and their families came to work on the farm themselves in the 1930’s, shipping tractors to the panhandle by train. The three brothers, Diana’s grandparents and great uncles, were all three medical doctors, but that did not prevent them from doing some of the farm labor. Diana’s own parents, her doctor father and richly artistic mother (she is enshrined in the Kansas Theater Hall of Fame), also spent time on this farm, and were well-known by Mr. Watson and his wife, Jonnie. We were told that Mildred, Diana’s mother, named a small body of water on the property after herself. The day of our visit found Lake Mildred dry.

During the visit, Jim Watson contacted another family, the Isaacs, who had had many dealings with the Tretbar and Brown families, so we met and chatted with Mr. Isaac and his son, and learned about the land, what was being grown on it, and something about the ins and outs of 21st century farm practices. Nearly all activity, from irrigation to planting to crop management can be controlled electronically, often through a single cell phone. Gone are the days of one-row planting and prayers for rain, though I imagine that both the Watsons and the Isaacs have hoisted more than a few prayers for moisture in particularly dry seasons. 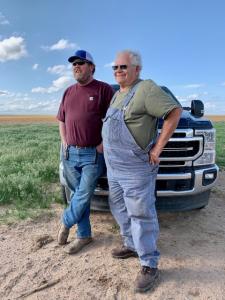 These chats were cordial and altogether delightful and informative, especially to this non-soiled creature. But there was something rather more important for me during my time with these farmers. It was a beautiful May Day in Oklahoma, and as we chatted, gazing out over the land, with its spring wheat crop green and about 18 inches high, backed by a fallow piece that once grew cotton but now sown in milo, the Watsons, father and son, and the Isaacs, father and son, were silhouetted against the blue  sky and the fertile soil with a pleasant wind cooling us in the late afternoon sun. They appeared to be rooted in that lovely soil, planted firmly in the ground, a ground of which they knew every square inch, a ground that offered them its yield and made for them their very lives and characters. They are true soil creatures, and I saw Genesis come right to life before my eyes. And I saw just how far I had distanced myself from this ancient rootage.

Now, don’t get me wrong; I know enough about the farm life, from my safe distance, to know how hard and uncertain such a life is. I have no wish to romanticize that life and imagine that if I just rushed back to those fertile roots I would somehow be a better, more complete person. Hardly! But to know that the Watsons and the Isaacs are still creatures of the soil, and that the Oklahoma Panhandle is replete with such people, gives me hope for the future of the land, and teaches me that in their futures as small farmers rests in part my future as a consumer of what they still produce. In that tiny way, I remain a soil creature, a creation of YHWH, a partner with the soil that gave me life. 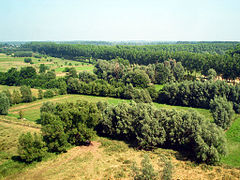 The IMDB "Goofs" page for the...
slacktivist
Related posts from The Peripatetic Preacher