The text for this Sunday assigned by the Revised Common Lectionary is purportedly the end of the long tale of David’s rise and fall, from the heights of his glory to the depths of his sordidness, from his choice by Samuel as king to his sickening inclusion of his son, Solomon, in plots to murder old enemies. We have been looking at several scenes of that long story since Pentecost, and as usual, it has been a sobering exercise. To end this astonishing and painful narrative with the generally appallingly pious treacle of these chosen texts is to tarnish and whitewash all at once the story’s portrayal of an all too human king and his struggle to live in the sight of his God with integrity and righteousness. The tale reveals that his struggles have largely been a failure when he dies, cold and lonely, with monstrous words of revenge as his final demands. I would urge all preachers to pass over these texts in silence and choose instead some of the scenes that demonstrate the horrors that David asked of his son and heir, namely the murders of Joab and Shemei at the clever and wily hands of the new king, at the behest of his dying father. Without those scenes, the first words suggested for today’s reading concerning the “firm establishment” of Solomon’s reign (1 Kings 2:12) can sound innocuous, rather than the grim and terrible words they in fact are when seen in the light of just how Solomon was able to make certain their “firm establishment.” Solomon comes to the throne on nothing less than a river of blood, and the story must be remembered in no other way.

And the first narrative concerning the kingship of David’s son is equally pallid and sickeningly pious. This new storyteller, clearly not the master who has guided us through the lives of Saul, Samuel, and David, begins his account of Solomon with a forced and doctrinaire recounting of a supposed dream that the new king has. That dream includes everything that any new monarch might hope to have from his God, and more besides, based squarely on egregious lies told about his father and himself. That author we now call the Deuteronomist appears to be in full control of the narrative, as he proceeds to picture Solomon as the very paragon of piety and religious devotion, a portrait that toward the end of the life of this king will be clouded somewhat by his fervid desires to be a Middle Eastern potentate with temple and palace to be envied, and by an unmatched harem, some of whom lead him astray toward the worship of other gods (see 1Kings 11). Furthermore, his fiscal practices bely his so-called fabled wisdom, as he levies enormous taxes and demands onerous building duties from his own people to keep up his facade of greatness. The result of all that is a restive people, who are not altogether sad when the old king finally dies, and who hope that his son and heir, Reheboam, will be an improvement. He is not, the result of which is the division of David’s kingdom north and south, a rift that lasts for the next 200 years (1 Kings 12). 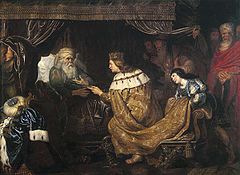 I will examine today’s text only to lure you away from it as a poor subject for preaching. It begins: “Solomon loved YHWH by walking in the statutes of David his father, although he did offer sacrifice and incense at the high places” (1 Kings 3:3). It could be said that Solomon’s attendance at the “high places” of the land, that is those hill top shrines that dotted the countryside before the building of Jerusalem’s temple, could be a stain on the king’s extraordinary piety, but the author implies that poor Solomon was forced to do his worship at such places precisely because the temple was not yet available to him, as 1 Kings 3:2 makes clear. Solomon will very soon turn his hand to temple building. During one of these high place visits, the king has a dream directly from YHWH, and here is where affairs get particularly repulsive. By telling us that “Solomon loved YHWH by walking in the statutes of his father David,” any reader would surely wonder just what sort of “statutes” those might be. Rules for successful adultery perhaps? Laws for completed murder and the right sort of lies to tell to cover it up? In the hands of the Deuteronomist David has already become a man unrecognizable to anyone who has read the work of the books of Samuel. But it gets worse.

“At Gibeon (a place with a long history in Israel in its struggles for a unified nation) YHWH appeared to Solomon in a night dream, and Elohim said, ‘Ask for what I can give you’” (1 Kings 3:5). To this astonishing open-ended request from the God of the universe, Solomon replies, “You have offered  great chesed (unbreakable love) to your servant David my father, because he walked before you in faithfulness, in righteousness, and with upright heart with you; and you have kept for him this great chesed and have given him a son who sits on his throne this day” (1 Kings 3:5-6). Exactly which David Solomon refers to is finally impossible to determine, because we know of no David who is always “faithful, righteous and has an upright heart;” these words have been almost completely foreign to the David we know.

“Now, YHWH my God, you have made your servant king in the place of my father David, though I am but a tiny child, who knows neither going out nor coming in” (1 Kings 3:7). Now there is a whopper of a claim! The clever man who has just followed his father’s designs for the executions of Joab and Shemei, now alleges that he is but a “tiny child,” incapable of knowing just which way to turn. It is nothing less than absurd to make such an assertion! But he does not stop there: “Your servant is among your people whom you have chosen, a vast people, who are so numerous that they cannot be counted or numbered. So give to your servant a listening heart (“understanding mind” NRSV) to judge your people, to discern between good and bad. Who finally can judge this your great, noble people” (1 Kings 3:8-9)?

YHWH’s reply to this obsequiously humble petition, riddled with lies and half-truths about both Solomon and his father, is the stuff that any monarch’s dreams are made of. “It pleased the Lord that Solomon had asked this. ‘Because you have asked this, and have not asked for yourself long life, or riches, nor for the lives of your enemies, but have asked for yourself discernment to listen for justice, watch! I now act according to your word; I give you a wise and discerning heart; no one like you has been before you and no one shall arise after you who is like you. And also what you did not ask for, riches and long life, I give them to you as well’” (1 Kings 3:10-13). In short, Solomon, according to YHWH, has just become the unmatchable paragon of YHWH, a wise and discerning monarch who also happens to be rich and will live a long and prosperous life, safe in the bosom of his God. One may only imagine that the most admirable propagandist of Solomon’s court could write such stuff, or at least a later Deuteronomistic writer who had the task to make out the Davidic dynasty of David and Solomon to be without blemish or stain. Here is an obvious attempt on the part of an editor to clean up the image of David and his son, assuming that the stories about the two of them will be neglected and forgotten in the light of such religious claptrap. May it not be so! May we not be taken in by such rank propaganda, such twaddle, such blatant nonsense. These words simply must not be allowed to run roughshod over the amazing tales we have been reading since Pentecost, because they are tales about us, our jealousies, our treacheries, our pseudo-pieties. It was a sad day indeed when this material wormed its way into the narratives of Saul, Samuel, and David. May it be forgotten forever!