Why I Deleted My USA Today App

I decided a while ago, with full knowledge of this decision’s consequences, to become a little more ignorant.  As part of my ongoing attempt to live a quieter life, I deleted some apps from my phone that served little purpose but to distract me and to add noise to my life.

One was my USA Today app. I used to receive notifications on my phone whenever the social media editors at USA Today decided something was important enough to send out an alert. I rarely read the accompanying stories, but I couldn’t help but notice the headlines in the notifications even if that meant only letting my eyes sweep across the words while dismissing the notification.

Most of these alerts were for things that I found totally uninteresting. Apparently, to USA Today’s social media mavens, sports stories and tales about what celebrities are wearing merited alerting the millions who had downloaded their app. Even more serious things, stories about disasters or another school shooting, were lost amidst the other noise. The little dinging bell on my phone that sounded when an alert came through reduced every development to just another bit of background noise.

I could do nothing about the serious developments I read about in the alerts. Most of what was reported on, no matter how dreadful, lay outside my circle of influence. Sure, once in a while there might have been stories that prompted a call to my congressman’s office, but the vast majority of the news was nothing but abstract stories about human suffering I could do nothing to aleve.

So, I deleted the app.  I haven’t missed it. I have also begun avoiding other sources of news and opinion I once frequented. I unfollowed news outlets on Facebook. I silenced friend’s feeds who routinely post opinions on current events. I stopped visiting blogs whose content consists primarily of reactions to the current news cycle.

I haven’t missed any of it. I could have predicted that I wouldn’t have after reading C. John Sommerville’s great little book “How the News Makes Us Dumb” a few years ago. In its few pages, Sommerville dissects the news industry as well as our cultural myth that watching a lot of news is the sign of a mature and “well-informed” person.

Since making this change, life has, predictably, gotten quieter. I no longer get hooked into pointless online debates. My body is more relaxed. When I was caught up paying attention to online news and opinion, I could feel my chest constricting. Participating in online debate culture has an addictive quality. We wait breathlessly for the next hot take to appear. We feel a surge of power in leaving a comment. We relish the snarky take down.

Like all addictions though, this one limits our ability to live fully. Since I have given up following online news, I have discovered that I am interested in a whole slew of topics to which I can now give more attention. I spend more time listening to music, exercising, and attending to my children. Yesterday, I learned a magic trick.

So, perhaps it is not wholly accurate to say I have chosen to become more ignorant because I have learned much about the world outside online debate culture. I was ignorant of those things before, but by being up-to-the-minute on the news allowed me to think I was not. When I was more current with the news, I knew less about the things I am really interested in, about the present moment in which I exist.

No one can be omniscient, but modern internet communications can easily give us the feeling that we are. Choosing to spend less time attending to the news, is just a way of choosing to learn things that are more fulfilling and more valuable. If being more ignorant about the news allows us to pay more attention to things that are ultimately more important, then that is the kind of ignorance I want more of. 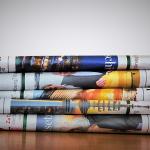 September 28, 2018
Recent Comments
1 Comment | Leave a Comment
Browse Our Archives
get the latest from
The Road Home
Sign up for our newsletter
POPULAR AT PATHEOS Evangelical
1

USA as a "Failed Social Experiment"?
Cranach
Related posts from The Road Home

Evangelical
One Reason Your Life is So Hard
The Road Home

Evangelical
On the Necessity of Romance
The Road Home

Evangelical
Why It's So Hard to Be Satisfied
The Road Home

43 Years... and Counting (but who's counting???)
43 years ago today, Ann and I got married in the Methodist...
view all Evangelical blogs
What Are Your Thoughts?leave a comment
Copyright 2008-2020, Patheos. All rights reserved.