Get updates from The Round Table delivered straight to your inbox 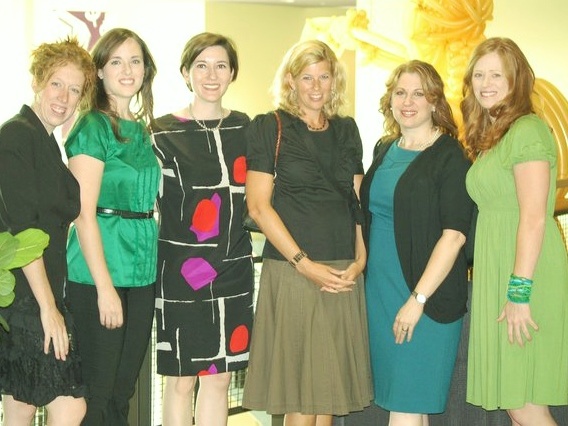 Lisa Butterworth grew up in Castle Dale, Utah, graduated from USU in 1998, and has worked as a special education and preschool teacher, yoga and dance instructor, and wants to be a writer when she grows up.  She is a wife and mother of three beautiful red-heads.

She founded the blog Feminist Mormon Housewives in 2004, a place with a strong supportive community where people discuss any topic that might be of interest to feminists, Mormons, housewives, and pretty much anyone else.

Emily Warburton Jensen writes, edits, and mothers five children, often simultaneously. She hails from the small Northern Utah town of Deweyville and is a former Ricks College journalist and Utah State University journalist (Print Journalism, 2001). She has edited various fiction and non-fiction works, worked on a curriculum committee for the LDS magazines and contributed a chapter to Pioneers in the Pacific and an online article for BYU Studies.

Emily loves searching through and highlighting the LDS blog world as the Mormon Times Bloggernacle columnist. Her dream of being a writer for the Deseret News is now a reality. She is delighted to be the moderator for The Round Table.

Saren Eyre Loosli is an organizer, writer, speaker, trainer, wife and mother of five young children who currently lives in Odgen, Utah.  The oldest of the nine children of NY Times bestselling parenting authors and speakers, Linda and Richard Eyre, Saren grew up in Boston, Virginia, London, and Salt Lake City with stints in Japan and Mexico and served a mission to Bulgaria.  A graduate of Wellesley College (BA, 1992) and Harvard University (M.Ed. 1997), Saren had the opportunity to manage volunteer recognition programs for The Points of Light Foundation in Washington DC and create and implement curriculum and training programs for the Corporation for National Service, several public school districts, the YMCA and many other organizations while living in the Bay Area and in St George, UT.

After becoming a mother and finding that opportunities for recognition, training and development were sparse in the field of motherhood, Saren co-founded The Power of Moms. The purpose of The Power of Moms is to help mothers learn from each other and become the moms and women they really want to be through online articles and training programs as well as mothers’ groups, workshops and retreats throughout the world.

Neylan McBaine grew up a member of the Church of Jesus Christ of Latter-day Saints in New York City and attended Yale University. She has been published in Newsweek, Dialogue: A Journal of Mormon Thought, Segullah, Meridian Magazine, The Washington Post’s On Faith, Patheos.com, PowersOfMom.com and BustedHalo.com. She is the author of a collection of personal essays — How to Be a Twenty-First Century Pioneer Woman (Lulu, 2008). She lives with her husband and three young daughters.

Neylan is the founder and editor-in-chief of The Mormon Women Project, a continuously expanding digital library of interviews with LDS women found at www.mormonwomen.com that shows there are many ways for righteous women to choose the right. Neylan is also an associate creative director at Bonneville Communications, a media consultancy for the Church, contributing to the production of video portraits in the “I’m A Mormon” national media campaign found at Mormon.org.

Kathryn Lynard Soper is a writer, editor, and mother of seven who grew up in Maryland and makes her home near Salt Lake City, Utah. A graduate of Brigham Young University (English, 1993), she is the author of the memoir The Year My Son and I Were Born: A Story of Down Syndrome, Motherhood, and Self-Discovery (Globe Pequot Press, 2009), has edited four published anthologies, and contributes to Mormon forums from Meridian Magazine to Sunstone. In addition to gender issues, her areas of interest include disability, mental health, sexuality, and spiritual development.

Kathryn is the founder and editor-in-chief of Segullah, a journal of literary and visual art established in 2005 to encourage creative talent, provoke thought, and promote greater understanding and faith among LDS women. The companion blog shares the journal’s mission to explore life’s richness and complexity while reflecting faithfulness to the gospel of Jesus Christ.

Chelsea Shields Strayer is currently living with her husband and infant daughter in Baltimore, MD where she is finishing up her PhD dissertation in both biological and cultural anthropology from Boston University. She has spent much of her twenties living and working in Africa where she researches the physiology of indigenous healing, religion, and rituals of the Asante in Ghana, West Africa. She has a bachelor’s degree from BYU and a masters degree from Boston University.

She is one of the co-creators of LDS WAVE: Women Advocating for Voice and Equality, an organization which hopes to be the action based arm of LDS feminism. LDS WAVE is a faithful organization dedicated to advocating for greater gender equality in the LDS church. She is also the Ask a Feminist columnist on www.ldswave.org. Chelsea has also been involved with Exponent II since 2005. She is a permanent blogger and a Global Zion consultant for the magazine.