Magick at a Catholic Church

I don’t remember where I heard that Dionysus was once worshiped at the location of the Sacre Coeur Basilica in Paris, but it stuck in my head. As a devotee of Dionysus I desperately wanted it to be true. I had hoped I would find him there hiding in the walls or woven into the energy of the place, but he wasn’t there. At first I was disappointed, but it allowed me to open up to the magick at a Catholic Church.

Places of worship always fascinate me. Especially in Europe where many churches were built on the top of older sacred sites. I stepped onto the grounds of Sacre Coeur hoping to tap into the older faith lying hidden beneath the floor of the church, but instead I found myself inspired by the devotion of one Catholic pilgrim.

I walked along following the route of all the other tourists and visitors. It is a wondrous space that holds a unique beauty, but like most Christian spaces it left me feeling a little empty and out of place. Feeling like I didn’t belong, I turned to face a small altar and saw this: 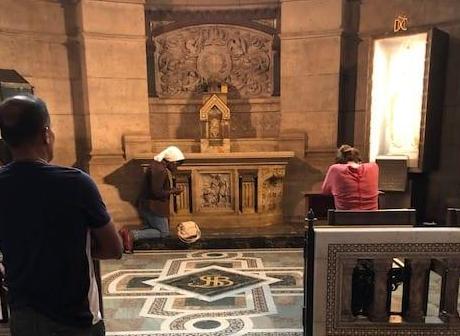 At first I thought she was a nun. I’m fascinated by nuns. I wish there was a Priestess order that I could join in dedication to one of my Godds*. What a lovely option to have. But no, upon closer inspection, I noticed her purse on the floor and jeans she was wearing. She wore a simple white cloth over the top of her head, with a rosary in her hands, and she was deep in prayer.

I felt a little guilty taking her picture when she was in such a state of devotion, but I couldn’t help myself. The scene was beautiful. Her devotion was beautiful. I felt so inspired by her act of prayer. I wanted to join her, to hold her hand, and add my prayers to hers. I wanted to join her and sing. I felt called to open my voice so the Godds would hear her prayers and maybe let her know that she was not alone in her devotion.

Instead I snapped this picture and turned away to give her privacy. Witnessing her prayer changed the rest of my visit. Perhaps Dionysus wasn’t there, but there was still plenty of magick. Prayer is magick. It was thick in this place; palpable. It was almost like I could reach out and hold it in my hands. This tourist visit awakened my magick at a Catholic Church. I felt connected back into faith, even if wasn’t my own.

*I use the spelling of Godds as a more genderfull expression of the word. 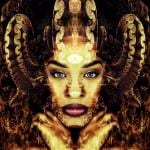 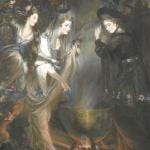 August 31, 2019 The Magical Practice Of Singing
Recent Comments
0 | Leave a Comment
Browse Our Archives
Related posts from The Witches Next Door 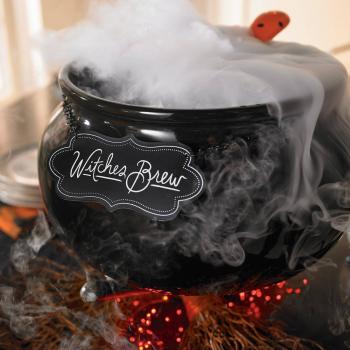