Women in da HOUSE! Not…

Part Two of I-Don’t-Know-How-Many in a series of posts inspired by “Miss Representation.”  If you haven’t seen the trailer for this movie, and you have 8 minutes, please watch it here now.

From my 15-year-old daughter and her 17-year-old friend – “That’s because they don’t WANT to be in Congress.”

Yes, because we understand that it’s a reflection of the fact that women have many more career choices than they used to, lo, those many decades ago.  Women aren’t so few in Congress because they’re not ALLOWED or being told they CAN’T, right?  There are so many more career paths open to women now than 50 or even 30 years ago, and that is indeed a marvelous thing.

No, because well, they don’t want to be in Congress.  Why not?  Maybe it’s because they continue to be dismissed and belittled when it comes to politics.   (You may recognize the author of the second letter…) 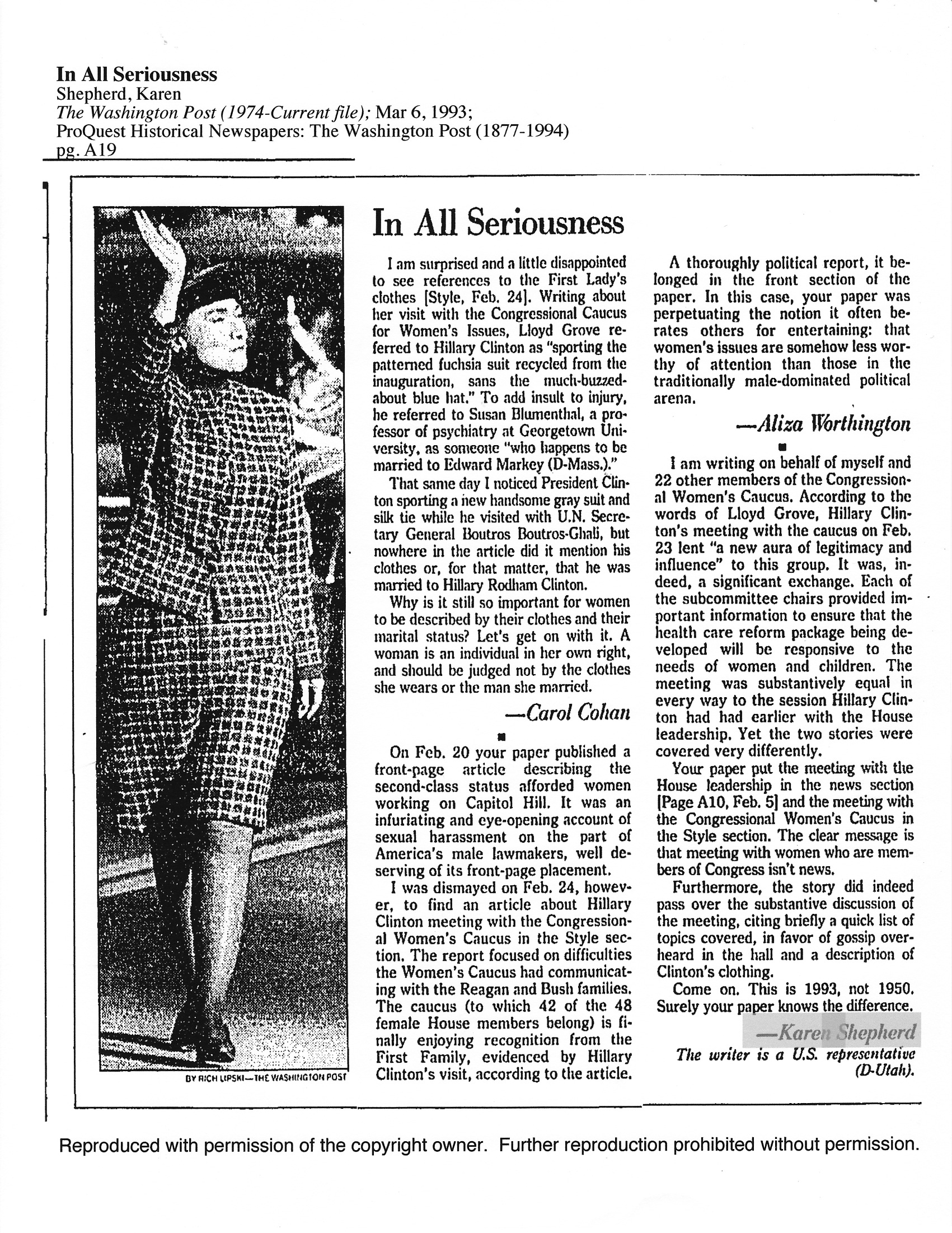 “Oh, come on, Aliza,” you say – “That was close to twenty years ago!  Surely, things have improved since even then!”  I’m not so sure.  In the 2010 mid-term elections, women made no gains in Congress.  It was the first election since 1979 in which they didn’t increase their presence in Washington.

According to the 15YO who lives in my house and her friend, “It’s a sucky job.”  So is being President.  I mean, THEY wouldn’t wanna do it…crappy pay, no privacy, intense scrutiny and pressure.  So, why, I asked, do so many men want these jobs?

“It’s genetic, Mom.”  E and her friend believe very strongly that men are, by nature, drawn to positions of power in business and politics, and women achieve and exert their power in other arenas and ways.  It’s not necessarily a bad thing.  They have a choice, and they’re choosing not to go into politics.

Fair enough, in many cases.  “Fine,” I tell them.  “Let’s assume men are naturally drawn to having power over large numbers of people and large geographic areas.  If they comprise 83% of Congress – if this is just the way it is and is going to be – how do we ensure women are treated fairly in the lawmaking process?”

Then I told them about this.  A new Federal Reserve rule stipulates that I can no longer open a credit card account by myself.  Nope.  I’m just a lil’ ole homemaker, and since I don’t bring any actual money into the household, I’m not deemed credit-worthy.  Forget the fact that the hubs and I have filed jointly for 20 years.  Forget the fact that we’ve NEVER had separate bank accounts since we’ve been married.  Forget the fact that I am the one who pays bills, plans long-term and makes day-to-day financial decisions.  No, kiddies, not good enough.  Combined household income holds no weight anymore.  If I don’t earn my own paycheck, no credit card.

Well, THAT put some fire in their eyes.  Yes, indeed – E and her friend were livid about that.  “What?  That’s so ridiculous!”  I agreed, but said, “If I had a job, though, we’d have a lot more money…”  “Yeah, but then you would have had to PAY someone to take care of us and do all the stuff you do during the day!”  Yes, children, that is so.  (And, thank you for noticing that I do “stuff” during the day.)  A great friend of mine, when talking about this new rule,  put it beautifully and sardonically:  “I always suspected everything I did all day had no value.  Now I have proof.”

The angry girls at my kitchen table rightly pointed out that this new rule puts being a stay-at-home-parent even further out of reach from those (predominantly women) who might want to do it.  Sure, you can stay home if you can manage it – but you have no economic standing as far as the banks are concerned.

The Federal Reserve Board is appointed by the President and approved by Congress.

November 14, 2011 HR 358 - Protecting life? Letting Women Die? Neither?
Recent Comments
0 | Leave a Comment
"No thanks, bible beaters. Keep it to yourselves."
The Darling Kinkshamer Sweet Baby Jesus Frog
"Meh. I don't have a problem with them. I DO tend to go to one ..."
Sami Sweet Baby Jesus Frog
"OK, put on your adult cloths... come on, pull up those pants and realize it's ..."
johnokeefe Nationwide Needs to Apologize
"It strikes me as part of the larger -- and growing -- tendency for the ..."
kesmarn Nationwide Needs to Apologize
Browse Our Archives
get the latest from
Best of Patheos
Sign up for our newsletter
POPULAR AT PATHEOS Jewish
1