I sat down today to write about the heinous, inhuman and grotesque crimes committed by a group of teenagers in Steubenville, Ohio – two of whom “allegedly” dragged an incapacitated drunk girl from party to party to be sodomized, raped, urinated on, and mocked online.  For some reason, I’m coming up blank.  Thanks, Brent.

Yes, I’m talking about famed sports announcer, Brent Musburger, and his televised comments about Katherine Webb.  Musburger admired (at length and repeatedly) the beauty of Ms. Webb.  She is Alabama quarterback AJ McCarron’s girlfriend, and, well, a BEAUTY QUEEN.  Miss Alabama, to be exact.  The camera was on her for a prolonged period of time during his inappropriate…um…commentary.  ESPN has since apologized, and I think rightly so.  Even though Katherine Webb wasn’t offended (of which I am glad,) millions of viewers (some of them male, if blog commenter IDs are accurate) were uncomfortable and creeped out by it.

There were predictable cries about the PC Police gone mad, and outrage that ESPN apologized.  I agree with them.  And I don’t.  Frankly, I’m conflicted about it in a way that I am, of course, NOT conflicted about Steubenville.  Maybe that’s why when I was experiencing writer’s block, and began jotting down stream of consciousness notes about it, my paper looked like this: 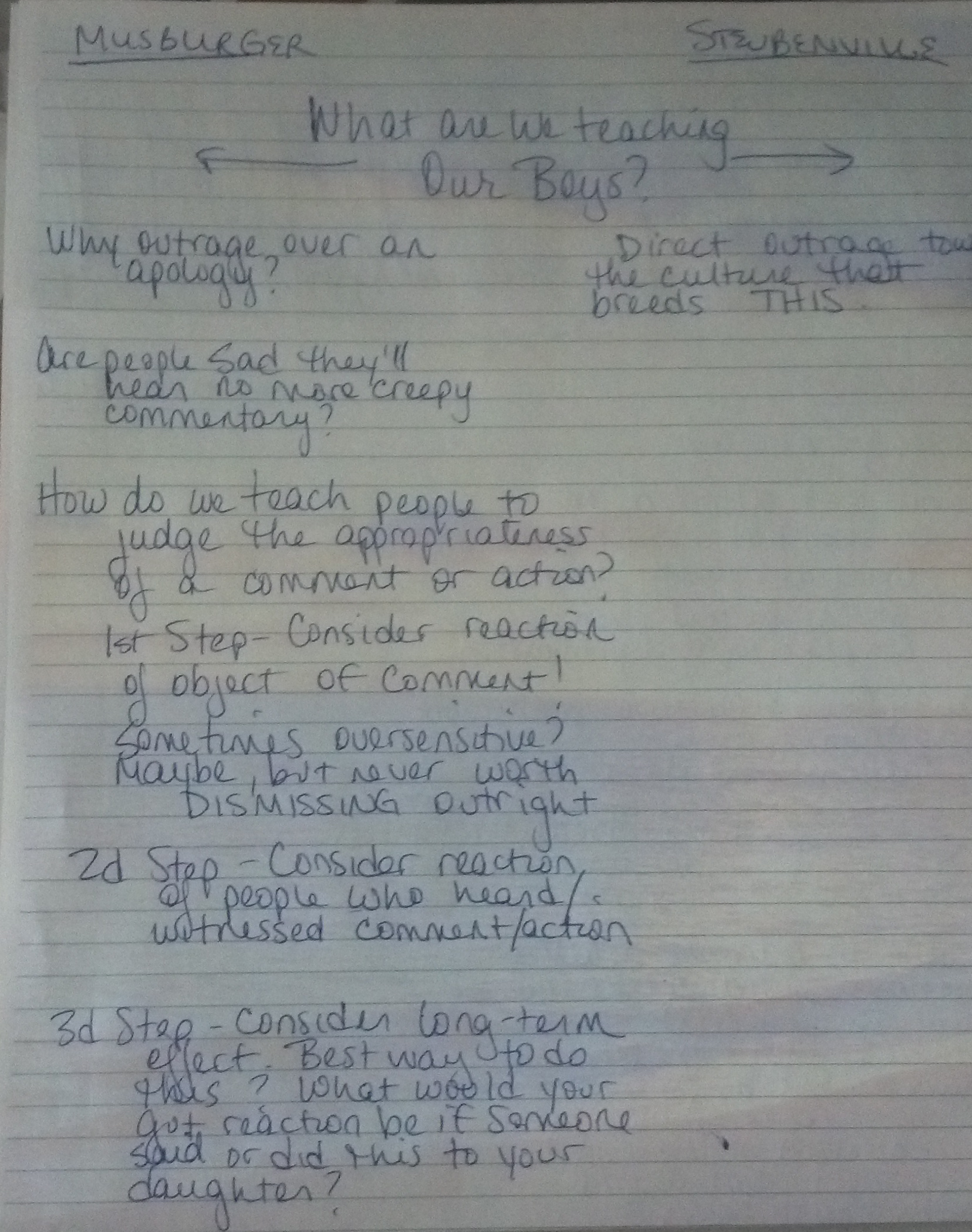 Why is there outrage about this apology?  Are people sad they might be deprived of creepy imagery of old men who want sex?  I don’t think they have to worry.  I mean, if Cialis commercials aren’t enough to creep you out while you’re watching football with your 8-year-old, I don’t know what is.  Are they concerned about Brent Musburger being deprived of his 1st Amendment rights?  I doubt it.  Might they be pissed that Mr. Musburger is being called out and reprimanded for behavior in which they themselves engage?  Now, we might be getting somewhere.

Like so many human behaviors, expressions of appreciation of another person’s appearance is wide in range and acceptability.  Hardly black and white.  On one end of the spectrum, we have “What a beautiful young lady!” which imparts appreciation coupled with respect.  On the other end, we have “That chick is so hot!”  My friend, Shoshana, articulated many of my own feelings about this perfectly when she wrote,

“When you call someone hot or HAWT, as forty-year-old men who are acting like teenage boys text it, you aren’t saying “Wow, that is certainly a beautiful woman. Look how lovely her dress is.” You are saying, “Man, I want to drag that chick on the floor and fuck her brains out and not have to see her again in the morning….shhhhh…don’t tell my wife.” The second the word HOT comes out of your mouth, you are announcing to the room your intention to fuck. And I mean fuck.  To say it means anything else is a boldface lie and a plot testosterone-fueled men thought up because they thought they were being tricky. Guess what? You’re not.”

So, where was Musburger on that spectrum?  In my opinion, he was hovering around the middle.  How do we judge?  And more importantly, how can we teach?  It’s fuzzy, and of course, highly dependent on the setting, delivery, body language, relationship, and a myriad of other factors that sometimes, understandably, leave some men wondering “What did I say?  What was wrong with that?  I was just saying something nice!  Isn’t that a compliment?”

1.  Consider the reaction of the person about whom you comment.  Are they uncomfortable?  Scared?  Repulsed?  In this case, Katherine Webb was not offended and thinks we should cut Musburger some slack.  Granted, when one pursues the life of a beauty pageant queen, complaints of objectification and being recognized for one’s looks would ring hollow.  Either way, though, the important thing is Ms. Webb, by her own account, is and will be just fine.

2.  Consider the reaction of others who heard the comment.  Were THEY uncomfortable?  Concerned for the safety of the person about whom you commented?  Were THEY grossed out?  In this case, the answer to at least some of those questions was “yes.”  As ESPN broadcasted to millions of viewers that highly anticipated college football game, they were right to issue an apology that Musburger used poor judgement and made loyal fans get a second, less pleasant taste of their gametime snacks by publicly lusting over a woman 1/20th his age.

3.  Consider the daughters.  Whether or not you have them.  If you are in the habit of making such comments in public to and about people, ask yourself this:  What would your gut reaction be if another man – of any age – said that about your 13-year-old daughter?  I think this is a good guideline because if you imagine you wouldn’t like it, you probably should keep it to yourself.

I’m still struggling, though, with what this incident represents on a larger scale.  Why did I sit down to write about Steubenville and find myself instead writing about these relatively low-impact comments by an addled old sports guy?  Maybe because in both cases, the question screaming out is, “What are we teaching our boys?”  Maybe I felt it was easier to start with the less heinous of the two stories – the one lives weren’t shattered.  Perhaps I’m finding it painful to draw the connection between beauty queen culture and rape culture.  I feel certain, though, that a connection is there, and I also feel a responsibility as a parent to explore it.  So, stay tuned.

February 4, 2013 Smoove Moves
Recent Comments
0 | Leave a Comment
"No thanks, bible beaters. Keep it to yourselves."
The Darling Kinkshamer Sweet Baby Jesus Frog
"Meh. I don't have a problem with them. I DO tend to go to one ..."
Sami Sweet Baby Jesus Frog
"OK, put on your adult cloths... come on, pull up those pants and realize it's ..."
johnokeefe Nationwide Needs to Apologize
"It strikes me as part of the larger -- and growing -- tendency for the ..."
kesmarn Nationwide Needs to Apologize
Browse Our Archives
get the latest from
Best of Patheos
Sign up for our newsletter
POPULAR AT PATHEOS Jewish
1

The Jewish Wheel of the Year:...
Open Table Judaism
Related posts from The Worthington Post