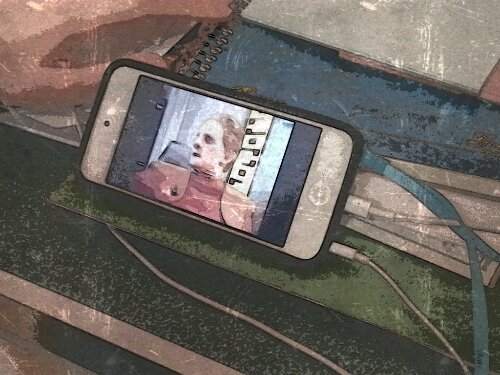 I like to think I’m a hands-on parent.  Somewhere between absent and hovering.  In an attempt to “participate” in my children’s “upbringing,”  I will sometimes look over their shoulder to see what they’re listening to/watching on their various devices.  Shockingly, the 16-year-old and the 14-year-old find this annoying.  The 9-year-old, however, STILL LOVES ME, and willingly participates in conversations with me.

So, it comes to pass that Leo’s at the table, headphones in, eyes glued to iPod screen.  I stealthily (not really) come up behind him to see what’s on the screen.  A wave of relief washes over me as I see that it is an episode of “Star Trek: Deep Space Nine,” and not “Drake and Josh.”  (There are few things I hate more than “Drake and Josh.”  Like, we’re talking with the fire and heat of a thousand suns.  Now that he had the iPod he was able to watch it without my having to hold it together through even 45 seconds of that show.  But I digress…)

I watched a minute or so of the DSN episode over his shoulder, without the benefit of sound.  The main characters all looked tired, worn, and annoyed.

I said, loudly enough to be heard over his headphones, “Boy, they sure look tired!”  (I can’t BELIEVE the teenagers don’t find my conversation skills thrilling.)

Sweet boy that he is, he paused the show, took out his headphones, and excitedly explained the plot line to me.

“They all have aphasia, mom!  It’s this problem when you know words and language, but when you try to say them, DIFFERENT words come out.  They’re all gonna die unless they can figure out how to communicate!”

“That’s a really cool plot,” I said.  What I was thinking, though, was “Did my f*cking NINE-year-old just competently explain aphasia to me?”  Then I dug back, with fond memories, to when my parents taught me what aphasia was…waaaaaaay back.  Two WHOLE WEEKS back, when they explained the condition to me because one of their close friends had a stroke and suffers from it now.  I was all of 43 years old.  Isn’t that sweet?

Still, I picked up what remained of my authority on the matter, and he went back to watching.  Then he paused the show again and asked, “What causes aphasia?”  Yay!  Now’s my chance to sound knowledgeable!

“Well, Sweetie, Grandma and Grandpa have a friend with aphasia, and his was caused by a stroke.”  There.

“What else causes it?”

“Uh…um…some other illnesses, I’m sure – or maybe a virus or bacteria…or maybe the brain isn’t…WHY DON’T WE JUST LOOK IT UP???”  I forced a smile and went to the laptop.

“E-P-H…” I started…but then I had to correct myself, as according to the computer (know-it-all) it was spelled with an “A.”

“A-P-H-A-S-I-A.”  We were directed to this site, Medical News Today, which had an in-depth explanation and examples.  I scrolled down to look for the causes, and he stopped me – “Wait!  I’m still reading!”

“Sorry,” I said.  Sorry I scrolled too fast while you were READING AND UNDERSTANDING the differences between “Global Aphasia,” “Fluent Aphasia” and “Non-fluent Aphasia.”  Sorry.  Good lord.

Then he gave the all clear to scroll down to the causes of aphasia:

That last one wasn’t really listed on the website as a cause.  But, I could make a damn good argument that it should have been.

March 18, 2013 I Call Bullsh*t.
Recent Comments
0 | Leave a Comment
"No thanks, bible beaters. Keep it to yourselves."
The Darling Kinkshamer Sweet Baby Jesus Frog
"Meh. I don't have a problem with them. I DO tend to go to one ..."
Sami Sweet Baby Jesus Frog
"OK, put on your adult cloths... come on, pull up those pants and realize it's ..."
johnokeefe Nationwide Needs to Apologize
"It strikes me as part of the larger -- and growing -- tendency for the ..."
kesmarn Nationwide Needs to Apologize
Browse Our Archives
get the latest from
Best of Patheos
Sign up for our newsletter
POPULAR AT PATHEOS Jewish
1