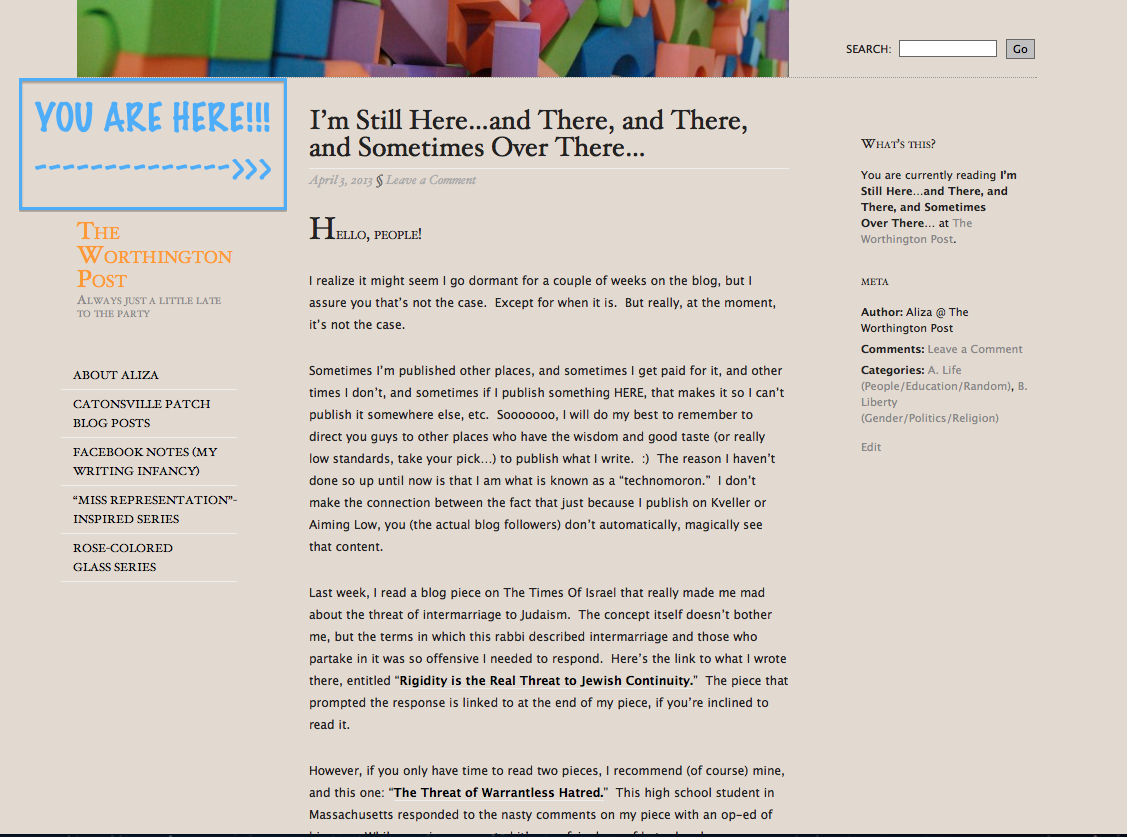 I realize it might seem I go dormant for a couple of weeks on the blog, but I assure you that’s not the case.  Except for when it is.  But really, at the moment, it’s not the case.

Sometimes I’m published other places, and sometimes I get paid for it, and other times I don’t, and sometimes if I publish something HERE, that makes it so I can’t publish it somewhere else, etc.  Sooooooo, I will do my best to remember to direct you guys to other places who have the wisdom and good taste (or really low standards, take your pick…) to publish what I write.  🙂  The reason I haven’t done so up until now is that I am what is known as a “technomoron.”  I don’t make the connection between the fact that just because I publish on Kveller or Aiming Low, you (the actual blog followers) don’t automatically, magically see that content.

Last week, I read a blog piece on The Times Of Israel that really made me mad about the threat of intermarriage to Judaism.  The concept itself doesn’t bother me, but the terms in which this rabbi described intermarriage and those who partake in it was so offensive I needed to respond.  Here’s the link to what I wrote there, entitled “Rigidity is the Real Threat to Jewish Continuity.”  The piece that prompted the response is linked to at the end of my piece, if you’re inclined to read it.

However, if you only have time to read two pieces, I recommend (of course) mine, and this one: “The Threat of Warrantless Hatred.”  This high school student in Massachusetts responded to the nasty comments on my piece with an op-ed of his own.  While my piece prompted its own fair share of hatred and mean-spirited responses, it also prompted this thoughtful missive from someone who contributes to the great hope I have for today’s youth.  I was very moved by his heart and intellect.

Anywho, that’s all for now – I’ll do my best to keep you all up to date if for whatever reason, I’m showing up There instead of Here.  🙂

P.S.  Nicky (my 14-year-old) pitched 4-1/3 solid innings a couple of days ago.  So there.  You can read about why this is so cool in this piece I wrote for Kveller.

April 15, 2013 Lost In Suburbia - Book Review*
Recent Comments
0 | Leave a Comment
"No thanks, bible beaters. Keep it to yourselves."
The Darling Kinkshamer Sweet Baby Jesus Frog
"Meh. I don't have a problem with them. I DO tend to go to one ..."
Sami Sweet Baby Jesus Frog
"OK, put on your adult cloths... come on, pull up those pants and realize it's ..."
johnokeefe Nationwide Needs to Apologize
"It strikes me as part of the larger -- and growing -- tendency for the ..."
kesmarn Nationwide Needs to Apologize
Browse Our Archives
get the latest from
Best of Patheos
Sign up for our newsletter
POPULAR AT PATHEOS Jewish
1