As I sat in my kitchen, munching on matzah crack (chocolate-covered matzah, for the uninitiated) as my sole tribute to the Passover holiday, I struggled to absorb the news of that bastard in Kansas City who targeted Jews with his guns (and the Missouri MAYOR who agrees with him.) Then I read this afternoon that in Ukraine, Jews exiting their Erev Passover synagogue services were handed flyers demanding they “register” their religion and property with the government. 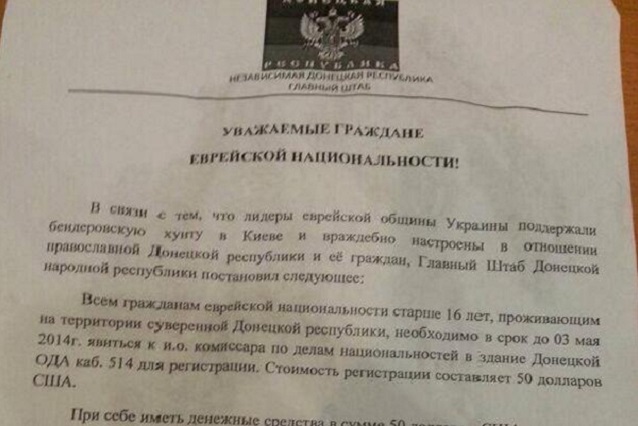 In an extremely volatile political climate, Jews in Eastern Ukraine were handed flyers instructing them to register themselves and their property with the government, pay a $50 fee for the privilege, or face exportation. This is a developing story, and there are conflicting reports about who is responsible for the leaflets. The men distributing the flyers carried the Russian Federation flag, and the leaflet itself had the signature of Denis Pushilin – the leader of the pro-Russian Separatists and the emblem of Pushilin’s organization.

Pushilin not only rejected the content of the flyers, but also denied that his organization was behind their printing. “Some idiots yesterday were giving out these flyers in targeted areas…”

Overall, though, the Pushilin party line is that the leaflet is the work of provocateurs: something aimed at riling up aggression against the Pro-Russian Separatists, as if world opinion was in its favor to begin with.

Whoever thought it up and carried it out, regardless of national identity, is guilty of an act of massive aggression against Ukraine’s Jews and the world’s Jewish population as a whole. To hearken back to the days of Naziism in such realistic and stark ways for the sake of political gain is unconscionable. To uncork these fears in Jews, even if it turns out to be only a ploy, is outrageous. Secretary of State John Kerry called the act “grotesque.” Whoever is responsible has twisted a knife in the collective gut of the Jewish people.

CNN reports the threat is not credible or real. Putin delivered a warm and conciliatory greeting to Russia’s Jews on Passover. Whether, however, the specific threat in the flyers is real or not, the effect has been to put the Jewish people into an even high-than-normal state of alert – a cruel act all by itself.

Even if this threat to Eastern Ukrainian Jews IS NOT real, rest assured most of us have learned from history. As much as the psycho in Kansas City would love to see it repeated, I feel he is in the minority. I firmly believe that when the Holocaust happened, most people of that time couldn’t believe it simply because nothing as horrifying had ever happened on such a huge scale before.  Now, however, that we know it can and did happen. Saying “Never before” is a state of denial, whereas “Never again!” is a state of refusal. We should be watching. And we refuse to take our eyes off the situation.

April 27, 2014 This Week in Sexism...
Recent Comments
5 Comments | Leave a Comment
Browse Our Archives
get the latest from
Best of Patheos
Sign up for our newsletter
POPULAR AT PATHEOS Jewish
1