“Unfair” Doesn’t Begin to Describe It

Oren is a friend I met online, and we have a lot in common. We’re both parents, spouses, bloggers, Marylanders, Jews, and challengers of gender stereotypes, among other things. For a long time, we’ve been sharing each other’s writing on social media, and I’ve marveled at the community of Dad Bloggers he has built, through sheer force of his personality and determination that fathers who happened to be the primary caregivers of their children shouldn’t feel alone.

He has received the worst news. Without any warning whatsoever, the C-word dropped a bomb on his family. Stage 4 lung cancer and a prognosis of one year. The cancer has spread, radiation treatment is done, his doctors come from the best hospital in the world, and the community (online and in person) has rallied around his family in ways he never imagined. It doesn’t surprise any of us who knows him, but it still surprises him. Typically humble.

Oren’s story got a moving write-up in The Chicago Tribune, and has been covered by www.Today.com. Friends and family, near and far, are raising money for his family on GiveForward.com (the site is also generously adding donations of its own – consider donating if you can…) While these stories are well worth your time, nothing is worth more than reading his own words.

Please take a few moments to read his own writing about his changed life, his brilliant wife, and his enchanting children. The gut-punch is countered by grace with which he processes this shattering new reality, and the small, but significant requests he makes of anyone encountering his family once it begins to exist as three rather than four. Even in the darkness of this news, Oren’s light has a strength and breadth that make him positively ethereal. 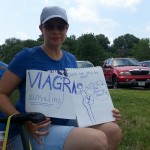 July 3, 2014 My Morning as Viagra Sidewalk Counselor
Recent Comments
0 | Leave a Comment
Browse Our Archives
get the latest from
Best of Patheos
Sign up for our newsletter
POPULAR AT PATHEOS Jewish
1