My Morning as Viagra Sidewalk Counselor

Last Thursday, June 26, 2014, the Supreme Court struck down a Massachusetts law that created a 35-foot “buffer zone” outside women’s health clinics (at which legal abortions are performed.) While my instincts cried foul, my intellect told me that since the decision was unanimous, the law itself must have had some pretty massive fundamental flaws. Surely, the trifecta of my girl crushes on the highest bench in the land wouldn’t have concurred otherwise in ruling against the buffer zone designed to protect women seeking legal medical care.

The SCOTUSBlog’s “In Plain English” column broke down the decision and the reasoning behind it in terms that I can (almost) understand. While I’m pretty smart, I’m not a lawyer, nor do I speak fluent Constitution, so some of it was a little hard to follow.  But I got the gist. Basically, as the law was written and subsequently argued, it violated anti-choice protesters’ First Amendment rights to free speech. Eleanor McCullen, lead plaintiff in this case, has been vindicated. The Huffington Post quotes her as saying, “It’s America. I should be able to walk and talk gently, lovingly, anywhere with anybody.”

I wondered , though, where a citizen’s privacy came into this discussion. I don’t know about you, but I find medical matters to be intensely personal. (HIPAA guidelines seem to support me in that.) This may seem painfully and ridiculously obvious, but doesn’t a woman or couple seeking medical attention regarding reproductive matters deserve privacy – regardless of whether they’re seeking an abortion or treatment for an STD or a breast exam?

Woman entering clinic: Um…I’m just getting medicine for my gonorrhea.

I’m telling you, I’m just DYING to go to one of these clinics for the SOLE PURPOSE of being accosted by one of these people.

Me: Actually, I have a super-itchy hoo-ha, and some goo is coming out of it. It sort of has a funky smell, too. Do you mind if I discuss THAT with you?

In fact, just to switch perspectives, I decided that I would do a little “sidewalk counseling” of my own. I like to challenge gender roles occasionally, and stick it to the man – so…I parked myself outside of a doctor’s office near where I live, and attempted to “counsel” the people going into that office about the dangers of…can you guess it?  Of course you can!  VIAGRA! (Insert Kermit the Frog Arm Flail here…) I “walked and talked with people gently and lovingly” about why they shouldn’t take Viagra. Just for funsies, I made a video of how I spent the morning after SCOTUS decided my free speech was more important than how I spent the morning after. (Credit Emily Bock with recording and editing said video.)

In all seriousness, what right does ANYONE besides my doctor have to even know, let alone advise or counsel me about any medical decision – especially a medical reproductive decision – I might make? Here’s a radical idea: If a medical procedure or medicine is legal, I have a right to pursue that remedy unencumbered – even if some people wish it weren’t legal. Say it with me. “My medical decisions are none of your business.” Sing it. Scream it from the rooftops. “MY MEDICAL DECISIONS ARE NONE OF YOUR BUSINESS!” Every time you say that phrase, the sweet baby Jesus smiles, coos and claps his hands, trust me. 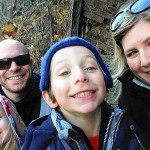 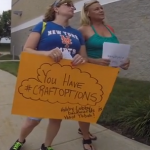 August 1, 2014 My Afternoon as a Hobby Lobby Sidewalk Counselor
Recent Comments
11 Comments | Leave a Comment
"No thanks, bible beaters. Keep it to yourselves."
The Darling Kinkshamer Sweet Baby Jesus Frog
"Meh. I don't have a problem with them. I DO tend to go to one ..."
Sami Sweet Baby Jesus Frog
"OK, put on your adult cloths... come on, pull up those pants and realize it's ..."
johnokeefe Nationwide Needs to Apologize
"It strikes me as part of the larger -- and growing -- tendency for the ..."
kesmarn Nationwide Needs to Apologize
Browse Our Archives
get the latest from
Best of Patheos
Sign up for our newsletter
POPULAR AT PATHEOS Jewish
1