Good-bye and Hello as Always; The Only God to Whom Jupiter Must Bow

Good-bye and Hello as Always; The Only God to Whom Jupiter Must Bow June 5, 2015 Tom Swiss

“Good-bye and hello, as always” is the haunting final sentence of Roger Zelanzy’s novel The Courts of Chaos. (Which makes it also the final sentence of the whole original Chronicles of Amber series.) And it seems like a good opening line here as I say goodbye to The Zen Pagan as an Agora column, and hello to The Zen Pagan as a full-fledged Patheos blog.

We’re crossing a boundary here, and so this little meditation on the topic. This is also being posted as my final post for my run at Agora, in a slightly different form. My thanks to Agora’s editor David Dashifen Kees for putting up with me there, and to Patheos Pagan’s Managing Editor Jason Mankey for giving me this shot at the big time.

Boundaries have been much on my mind this week.

It started when I was contacted out of the blue by a ex-paramour with whom things had not ended well. I hadn’t heard from her since, and seeing her text message stirred up more than a little emotional consternation. I replied that I needed to draw a boundary, that unless we were going to start with an apology from her for some past behavior I didn’t have much to say.

I don’t know where that will end up. It was the first time in quite a while that I’ve had to so explicitly draw a line, but stating and enforcing boundaries is an essential part of our mental and spiritual health.

Boundaries in their role as both endings and beginnings are also on my mind because this is both my first post for The Zen Pagan as its own full-fledged blog here at Patheos Pagan and my last column for Agora. But this change too is the crossing of a line, a passing of a boundary.

The Romans had a god for that: Terminus, the god of boundaries. His name may bring disturbing connotations to a modern American English speaker, from phrases like “terminal illness” to the sanctuary of Terminus in The Walking Dead — without any spoilers as to what our heroes find there, the name itself is designed to invoke apprehension, “the end of the line.”

But consider also “computer terminal”, a place where with the right incantations unlimited information is available; or “airport terminal”, where we can quite literally take flight, the dream of ages; or “battery terminal”, a point of power, where the power of the lightning itself is harnessed for our use.

Terminus was an overseer of boundaries, and each boundary is both an end and a beginning. Death is a terminus, yes — but so is birth. Our life has two ends, just like a piece of rope or wire, and it’s merely a habit of language that we do not refer to birth as a terminal event. So let’s not carry any negative associations we have about the word “terminal” into our consideration here.

According to Plutarch, it was the ancient king Numa, successor to Romulus, who originated the worship of Terminus:

He was also the first, they say, to build temples to Faith and Terminus…Terminus signifies boundary, and to this god they make public and private sacrifices where their fields are set off by boundaries; of living victims nowadays, but anciently the sacrifice was a bloodless one, since Numa reasoned that the god of boundaries was a guardian of peace and a witness of just dealing, and should therefore be clear from slaughter. And it is quite apparent that it was this king who set bounds to the territory of the city, for Romulus was unwilling to acknowledge, by measuring off his own, how much he had taken away from others. He knew that a boundary, if observed, fetters lawless power; and if not observed, convicts of injustice. (Plutarch, Numa 16)

Why is it that they [the Romans] were wont to sacrifice no living creature to Terminus, in whose honour they held the Terminalia, although they regard him as a god? Is it that Romulus placed no boundary-stones for his country, so that Romans might go forth, seize land, and regard all as theirs, as the Spartan said, which their spears could reach; whereas Numa Pompilius, a just man and a statesman, who had become versed in philosophy, marked out the boundaries between Rome and her neighbours, and, when on the boundary-stones he had formally installed Terminus as overseer and guardian of friendship and peace, he thought that Terminus should be kept pure and undefiled from blood and gore? (Plutarch, Roman Questions 15)

Ovid writes of later rituals, of blood sacrifice to Terminus and of a corrupted interpretation where boundaries are for other nations, not for Rome, and how during the building of a great temple to Jupiter, Juno, and Minerva there were many old altars to be relocated, but the augurs contacting the deities found that Terminus would not be moved: (Dionysius of Halicarnassus, Roman Antiquities 3.69.3–6)

O Terminus, whether thou art a stone or stump buried in the field, thou too hast been deified from days of yore. Thou art crowned by two owners on opposite sides; they bring thee two garlands and two cakes. An altar is built. Hither the husbandman’s rustic wife brings with her own hands on a potsherd the fire which she has taken from the warm hearth. The old man chops wood, and deftly piles up the billets, and strives to fix the branches in the solid earth: then he nurses the kindling flames with dry bark, the boy stands by and holds the broad basket in his hands. When from the basket he had thrice thrown corn into the midst of the fire, the little daughter presents the cut honeycombs. Others hold vessels of wine. A portion of each is cast into the flames. The company dressed in white look on and hold their peace. Terminus himself, at the meeting of the bounds, is sprinkled with the blood of a slaughtered lamb, and grumbles not when a suckling pig is given him. The simple neighbours meet and hold a feast, and sing thy praises, holy Terminus: “Thou dost set bounds to peoples and cities and vast kingdoms; without thee every field would be a root of wrangling. Thou courtest no favour thou art bribed by no gold: the lands entrusted to thee thou dost guard in loyal good faith….What happened when the new Capitol was being built? Why, the whole company of gods withdrew before Jupiter and made room for him; but Terminus, as the ancients relate, remained where he was found in the shrine, and shares the temple with great Jupiter. Even to this day there is a small hole in the roof of the temple, that he may see naught above him but the stars. From that abide in that station in which thou hast been placed. Yield not an inch to a neighbour, though he ask thee, lest thou shouldst seem to value man above Jupiter. And whether they beat thee with ploughshares or with rakes, cry out, ‘This is thy land, and that is his.’”…The land of other nations has a fixed boundary: the circuit of Rome is the circuit of the world. (Ovid, Fasti 2.639–684)

There are no stories about Terminus in your Bullfinch’s Mythology, and you probably didn’t talk about him in your social studies unit on Greco-Roman myths back in elementary school. The only significant mentions of him outside of classics and academia that I know of are a poem about aging by Ralph Waldo Emerson (a sort of polar opposite to Tennyson’s Ulysses) and Neil Gaiman’s Sandman story “August” (collected in Fables and Reflections).

And Gaiman’s story is amazing.

In it, Terminus, “He who walks the boundaries,” is “the only god to whom Jupiter must bow” because “boundaries are the most important of things.” Gaiman’s Morpheus (a being beyond the gods, the anthropomorphic personification of Dream) appears to Augustus Caesar as a favor to Terminus, to help Augustus steer Rome towards a bounded future rather than a world-conquering one.

Gaiman was clearly inspired by the tale of how Terminus would not yield to Jupiter at the building of the Capitol Temple. And perhaps he was inspired also by Plutarch’s contrast between Numa and Romulus’s versions of Rome — he’s just the sort of writer who would see something like that and ask “What if there was a conscious choice here for the future of Rome, on the level of a struggle between the gods?”

In the paucity of ancient myths about Terminus I’m quite content to steal Gaiman’s.

The god before whom Jupiter must bow. A god of peace and justice, of limits on power. Terminus is not much spoken of today but perhaps this is a god to whom we should pay far more attention. So many of our troubles are rooted in a failure to agree on, abide by, and enforce boundaries; from our personal relationships to issues of state power and civil liberties to international disputes.

And so as I open this new blog and close out my column on Agora, I sing thy praises, holy Terminus.

“The Zen Pagan” is now its own blog here on Patheos Pagan! We’ll have RSS and e-mail subscription information posted soon.

I’ll be on Taylor Ellwood’s Magical Experiments podcast on June 8th, talking about the intersection between Eastern religion and meditation and Western magic and Paganism.

My next scheduled events are the Free Spirit Gathering June 16-21 (still time to join us, for the week or for a single night) and Starwood July 7-13. 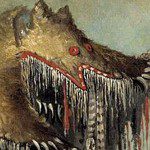 June 11, 2015 The Big Picture, Part I: From Shamans to Priests
Recent Comments
0 | Leave a Comment
"This is a beautiful post and I am glad to have read it. Thank you ..."
Amy Meert Blackberries and Bitterness at Lammastide
"Your openness gives perspective, allowing one to see the forest AND the trees. Life is ..."
catmomma13 Blackberries and Bitterness at Lammastide
"According to witnesses and to the police department's own account, the gun was on the ..."
Tom Swiss Police Violence: Seeing the Fnords
"There's some honeysuckle growing next to the parking lot behind my backyard. I will watch ..."
Amanda Ingalls Honeysuckle and Fireflies
Browse Our Archives
get the latest from
The Zen Pagan
Sign up for our newsletter
POPULAR AT PATHEOS Pagan
1