Does “The Star-Spangled Banner” Celebrate Killing Slaves? Part I

A Baltimorean Defense of the Anthem, in Three Parts

Part The First: The Motives for War

I am not much for patriotic displays. I don’t fly the flag, and while I’ll stand for the Pledge of Allegiance I don’t recite it — I stand as I would stand for a prayer at a church where I was attending a wedding or funeral, as a matter of politeness rather than participation.

The “secular religion” of American patriotism holds little interest for me. So I have no problem with those choosing to sit through the playing of the National Anthem in protest of the bad behavior of our government.

But I do have a Baltimore boy’s hometown pride about “The Star-Spangled Banner”, and I’m disappointed about some of the inaccurate things being said about it.

There are a number of criticisms commonly raised about our anthem. But I like that it’s the tune of a drinking song. I like that its range makes it difficult for any one person to sing — the better for a diverse chorus of voices. I like that the effective anthem, the first verse, is entirely a question: Did we give up, or are we still fighting the good fight? And I like that — almost certainly by accident, but still — it calls us to question whether the U.S. is “the land of the free and the home of the brave”, and if not to make it so.

And I like that it’s a song inspired by the time that Baltimore stood fast against one of the most powerful empires the world has known. It is worth commemorating how the ordinary people of Baltimore, from the workers building privateer ships to the volunteer militiamen who stopped the invading army, preserved our nation’s ability to resist British domination.

For some years I’ve been disappointed by the way the history of the War of 1812 has been told in a way that downplays the legitimate casus belli that the U.S. suffered at British hands. Our nation has been involved in many unjust wars of aggression — I’ve marched and protested against some of them. But while some people may have tried to exploit the situation, the War of 1812 was not such a war. It was a legitimate war of resistance. And if we better remembered what it was like to be bullied by a globe-spanning empire, we might behave less badly now that we are the empire.

So, a bit of history. While the American Revolution ended in 1783 with the British agreeing in the Treaty of Paris to recognize the colonies as “free sovereign and Independent States” and to “relinquish[] all claims to the Government, Propriety, and Territorial Rights of the same,” in practice this proved inconvenient to the British Empire as it struggled for world domination against the empires of France and Spain.

Control of the seas was key to Britain’s strategy, and the British Navy was mighty indeed — but it had a constant problem with desertion. To man its ships it turned to impressment, and it was convenient to impress Americans too. As historian John McMaster put it, “Hardly was the Constitution a year old when England began the practice of dragging American citizens from the decks of American ships, and during sixteen years had carried it on in every portion of the civilized world with impunity.”[McMaster 240] It’s estimated that each year the British impressed a thousand American sailors into their service.[Mariners’ Museum]

Merely kidnapping American sailors wasn’t enough; commerce that might benefit the enemy must be halted. So American ships were stopped and often seized at gunpoint by the British, and American ports were blockaded.

Americans of course were not happy about this. Murmurs of war could be heard in coastal shipping cities as early as 1805, but instead of a shooting war the U.S. government started a trade war and blocked the import of many British goods.[McMaster 210, 229, 236]

But instead of yielding, the Empire tightened the screws. In April 1806 the British warship Leander opened fire on the American coastal sloop Richard, killing its helmsman.[McMaster 236-237]. In June 1807, the Leopard stopped the American frigate Chesapeake — fresh from the docks with her guns still stowed — claiming the right to search for deserters from the British navy. When the commander of the Chesapeake refused, the Leopard opened fire, easily overpowering the Chesapeake, killing three and wounding eighteen of its crew.[McMaster 258]

While most Americans were outraged by these acts, some — President Jefferson among them — saw armed conflict with the mighty British Empire as impractical for the moment. Others, largely in the Federalist Party, still saw in that Empire a profitable trading partner, regardless of how working-class rabble like sailors might be treated, and feared that fighting the British would aid the all-too-democratic (in their minds) French.

Some in the Federalist faction even managed to blame the situation on immigrants — all this anti-English sentiment was clearly the fault of Irish vermin dragging their hate and rebellion across the ocean:

[S]ince the failure of the motley conspirators on the other side the Atlantic, almost every ship from Ireland has come to us laden with the refuse of rebellion, It is not, that the people are Irish; it is, that they are the very stench and corruption of Ireland. No one can entertain a higher opinion of the virtuous and well informed part of that nation, than I do; but of that part we have the fortune to see very few. Instead of these, greater part of those, that swarm to infest our shores, are like vermin, bred from putridity; to our country equally troublesome, dangerous, and disgraceful

The effects of receiving with caresses the multitude of foreigners amongst us, many of whom should be looked upon as emissaries and spies, begin now to be felt. Their great object seems to have been, during the war carried on between England and France, to throw the American weight into the French scale. We cannot be insensible that they have come too near effecting their design. The prevalence of such emissaries from France, in every part of the civilized world, is now no secret. They are numerous and influential in our country and little doubt can be entertained, that many, who came hither as if in danger or disgrace, are practising upon the credulity and imbecility of our present administration.[Lycurgus, 26-28]

(I cannot help but notice how closely this resembles some of Donald Trump’s rhetoric about Mexico.)

The Federalist side also appealed to anti-Catholic bigotry, as in a sermon by Elijah Parish in 1811 about the Babylon of “Papal Europe”:

The devil sows discord even among brethren. He is a murderer from the beginning. As a roaring lion he walketh about, seeking whom he may devour. He casteth men “into prison.” He is the prince of the power of the air. His emissaries and agent are in every quarter. Where do we not find the agents, the spies, the armies, the laws, the influence, the hired demagogues of France? The foe of humanity, is she not making war on the human race? Her maxim is, “A king of France resigns his sceptre, on the day that he lays aside his sword.” Such are the citizens of Babylon, of Papal Europe. Like devils, their element is fire, discord, and destruction. It is their boast, their pride and glory, to swell the tide of human misery.

Parish described the people of Switzerland, Holland, Prussia, and Hamburgh as “slaves” to the French[Parish 13-15] — a characterization we shall return to later.

With partisanship splitting the nation, and lacking the means to take effective military action, Jefferson expanded his trade war with a total embargo on imports or exports to or from American ports. This was a failure, often ignored and unenforced, and the greatest effect it had was to damage the American economy — it was especially harmful to the sailors whose rough treatment at British hands had inspired it in the first place![McMaster 279-292]

At the end of Jefferson’s second term the total embargo was repealed and replaced with a more limited one against England and France. For a moment it looked like tensions might ease as Madison took office[McMaster 336-343] but instead this unrest over the rights of the seas continued, and the powderkeg was packed ever more by British support for Native nations resisting American expansion.[McMaster 530-532]

Finally, in 1812, Madison and the Democratic-Republicans in Congress thought they had both the practical and political necessities to stand up to the evil empire and go to war.

In Part II we’ll look at how Baltimore came to play a key role in the war, and why the Battle of Baltimore was a pivotal moment in American history.

Lycurgus. War or no war? A view of the causes of our national decline and present embarrassments in two letters. New York: E. Sargent, 1807 http://purl.dlib.indiana.edu/iudl/general/VAC2068

McMaster, John Bach. A History of the People of the United States From the Revolution to the Civl War. Vol III 1803-1812. New York/London: D. Appleton and Co, 1914 https://books.google.com/books?id=9e8QAQAAMAAJ 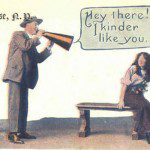 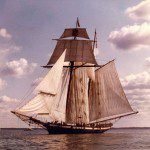 September 3, 2016 Does "The Star-Spangled Banner" Celebrate Killing Slaves? Part II
Recent Comments
0 | Leave a Comment
Browse Our Archives
get the latest from
The Zen Pagan
Sign up for our newsletter
POPULAR AT PATHEOS Pagan
1

The 25 Most Important Witchcraft Books...
Raise the Horns
Related posts from The Zen Pagan