As I write this I am in that most liminal of places, in transit between one continent and another, between heaven and earth: in an Air Canada 777 headed for Sydney, Australia, where I’ll be judging a karate tournament this weekend. Sometime while I tried to sleep, we crossed the Equator, my first time in the Southern hemisphere.

(I was more successfully than usual in trying to sleep on a long plane ride, as I have an entire row of three seats to myself to lie across on a sparsely populated airplane. A flight leaving near midnight has some compensations, I guess. Or maybe I’ve just accumulated some good travel karma.)

Actually I’ve been in liminal spaces a lot the past few weeks. As I mentioned in our last post, I was testing for my sixth degree black belt last weekend. And that meant that my old rank and title were taken away. It was a reminder of what it is to be a beginner, but it did not erase my experience. I was not beginner, not expert, not white belt, not black belt.

Until, that is, around last Sunday morning around 5am, when testing was completed and I was promoted to kari rokudan, sixth degree black belt, and given the title “Jun Shihan”.

(This trip to Australia is sort of my present to myself for passing. I can’t really afford it, but with a few of my fellow Maryland Seido Karate students going I can’t afford not to go and miss the opportunity. By the way, if you’d like to help with the expense, I’ve set up a GoFundMe: https://www.gofundme.com/send-kyoshi-tom-to-australia.)

“Shihan” is often translated as “master instructor”, so even though my shihan-ship is qualified by that diminutive “jun” (“associate” seems to be the best translation here), I am now a Genuine and Authorized Master of the Martial Arts. But then, I am also a Genuine and Authorized Master of Computer Science, according to the degree the University of Maryland gave me back in the 1990s, and that only took five semesters, not thirty three and a half years. So.

“Mastery”, I suppose, is relative to the field involved, and perhaps karate-do is a bigger field than computer science. Or the building trades, one of the other contexts where “master” is used meaningfully — “master electrician”, etcetera. Obviously it doesn’t mean complete knowledge. Perhaps the use in the trades is informative here: a master electrician is not one who knows everything about electricity or wiring, but one who is presumed competent to work without the close supervision of someone more experienced.

But whatever “mastery” means, I am acutely aware that I did not get here alone. There is a story about the Sufi “holy fool” Mullah Nasrudin, which I’ve told before:

The Mullah was traveling alone across the desert, when another group travelers recognized him from far away. Seeing the great wise man alone they figured he must be going somewhere important, and started to follow him.

Nasrudin saw these people coming toward him out of the desert, and he figured they had to be bandits, and so he started to hurry. The other travelers saw him hurrying along and thought he must be bound for some important spiritual business, and pursued him more quickly. So the Mullah turn off the road and went into the wastes hoping to lose them, but the other travelers took this as evidence he was going somewhere special and followed him faster.

Finally Nasrudin was exhausted and stopped, and the travelers caught up with him in the middle of nowhere.

“Oh great Mullah Nasrudin, we recognized your holiness from afar, and hurried to follow you. What great wisdom brings you to this place at this time?”

“I am here because of you, and you are here because of me.” I have been thinking about that idea a lot the past few weeks. The Zen teach Thich Nhat Hahn calls this “interbeing”, and often says things like “If you are not here, I am not here.”

Another word for it is “interdependence”.

When I stood for promotion, that was the work of a lot of other people. My teachers over the years, obviously — and not just my martial arts teachers, but my teachers in every tangent field. And the more I look, the more I see how every field is tangent to the martial arts.

But it was also the efforts of my student as well. If they had not done well, my teacher would not have said, “Hey, looks like Tom is an okay teacher, maybe we should let him test.”

“Alone, no one wins freedom,” Ursula K. LeGuin once wrote. That’s a powerful idea, one we need to recognize more. 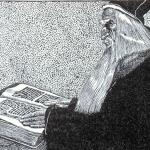 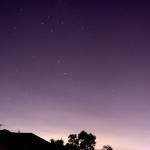 April 13, 2019 Travel, Renewal, and Ancestor Work
Recent Comments
0 | Leave a Comment
Browse Our Archives
get the latest from
The Zen Pagan
Sign up for our newsletter
POPULAR AT PATHEOS Pagan
1