This time of year, tradition has it, the veil between the worlds is thin.

As we discussed around this time last year, from a “Zen Pagan” perspective it may be useful to think of this veil not as a separation between a realm of matter and a realm of spirit, but as the boundary between a world of disconnected individual things and a world of dependent arising, between the ordinary view of reality where “form is form and emptiness is emptiness”, and that fuller view which sees that “form is emptiness, emptiness is form”.

Being the sort of people we are, Pagans, witches, and magickians often want to reach through that veil from this side to contact the ancestors or other spirits. Buddhism, too, has its rituals for the ancestral spirits — particularly Japanese Buddhism, which got its toehold in that country through funerary rites that the native practice of Shinto wanted nothing to do with.

But as the creepier side of the season reminds us, sometimes unwelcome presences can push through from that other side.

So as the leaves fall this year, as the trees show us their bones, I find myself thinking of a 13th century Zen Buddhist ghost story. It’s an old story and I’ve seen a few conflicting English versions of it, so if you happen to be an expert on the history of Zen and can fill in details, please feel free to correct me in the comments. But the general outline is like this:

Nanzen-ji is a famous Zen Buddhist temple near Kyoto. If you’re ever in the area, I highly recommend a visit; one of it’s subtemples, Saisho-in, is one of my favorite places in the world, for reasons I can’t quite explain. (Though it was closed for renovations after the death of the old temple master when I last visited.)

Its origins go back to 1264 (or 1267, say some sources), when the Emperor Kameyama abdicated in favor of his young son, went into semi-retirement, and built a villa there.

But within a few years, the Emperor’s new digs developed a serious ghost problem. There were poltergeist manifestations: doors opened by themselves, members of the royal family felt the touch of ghosts on their bodies. It did not make for a restful retirement.

Kameyama asked priests from several Buddhist sects to exorcise the ghosts. They prayed, they chanted, they burned incense to try to smoke out the poltergeist, but they all failed.

Finally around 1290 Kameyama invited Fumon (some versions name him Daiminkokushi, but I suspect this is a title rather than a name), a Zen priest, to take a crack at it. Zen Buddhism was new to Japan, introduced only about a century before, so the Emperor had to be getting a little desperate to turn to these upstarts.

Rather than chanting or using some ritual to dispel the haunting, Fumon and his disciples sat in silent zazen meditation.

Kameyama was so impressed that he became Fumon’s student and donated the villa to become a Zen temple. The favor of an Emperor – even a retired one – greatly increased the prestige and power of Zen, and had a significant impact on Japanese history.

So if there is something haunting you and you can’t seem to shake it, if the more you try to fight and exorcise that demon the stronger it seems to get, if the cliche “that which you resist persists” seems to fit your situation, I suggest you try Fumon’s solution: just sit. 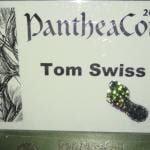 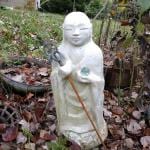 Ritual Of Hekate During COVID-19 For...
Keeping Her Keys
Related posts from The Zen Pagan