The Seas Heave And So Do My Thoughts: A Howler Monkey and A Holy Moment

The Seas Heave And So Do My Thoughts: A Howler Monkey and A Holy Moment December 15, 2018 Christy Thomas

It dawned on me later that perhaps that large howler monkey, sensing that I was ill as animals are wont to do, may have been acting as a guard, effectively saying, “Worry not. I’ve got your back.” I do remember having no fear, no sense of discomfort, just the fullness of peace and the embrace of a world that is foreign to me. 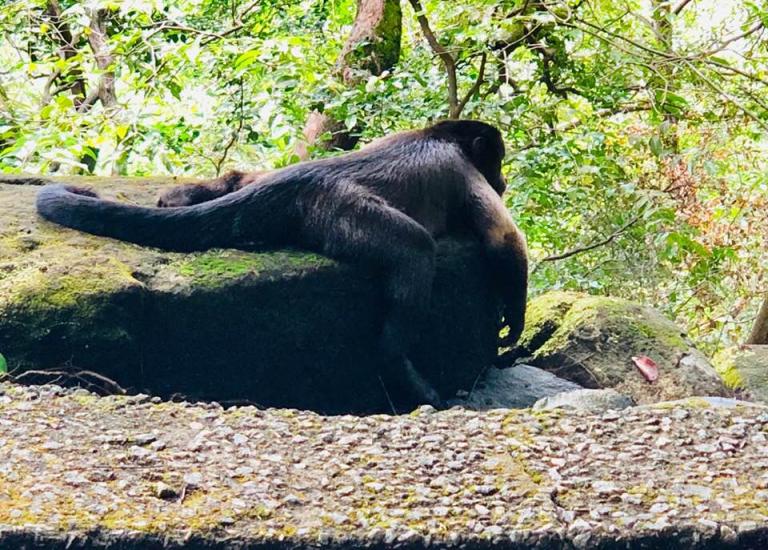 Today, we sail in the somewhat calmer, deep blue, Caribbean. But a few days ago, after the Captain successfully passed over the giant sandbar that separates the Amazon River from the Atlantic Ocean, the seas were heaving and the rains falling in torrents. Most of my fellow passengers retreated from the outside areas to cabins and inside lounges.

For me, I found my element on a somewhat sheltered corner of the pool deck where I could watch the weather at will and where I found space to deal with my many thoughts which dance all over my brain during this voyage.

A day after rejoining the Atlantic Ocean, we visited “Devil’s Island. ” Think: Papillion although much of that book/movie was a collection of multiple prisoner’s experiences with more than a bit of poetic license added.

Devil’s Island is one of a three-island grouping. We did not visit that particular island, as it is not accessible to visitors and has only one stone house on it, but instead went to the larger one where the administrator lived as well as some of the prisoners. The third island, also off-limits to visitors, contains the horrifically inhumane, 4X4, isolation cells.

The exceptionally incorrigible prisoners got to go to Devil’s Island itself–either to live in total isolation or with only thirty others at any given time. A pully system connected the two islands–and how they constructed that in the shark-infested waters that separate them leaves me guessing at how many prisoners died in that project–and carried to the isolated ones a daily ration of bread and wine.

Other than that, the men were totally on their own to survive. No Amazon Prime delivery for them.

We had some concern that the rough waters would make boarding the tenders much too dangerous for this cruise population of mostly older folks. Few of us mind rain–we expect and prepared for it–but the unsteadiness that accompanies trying to move from one heaving boat to another becomes a bit too much for those without experienced sea legs.

Thankfully, the seas calmed. Many of us headed over.

And so we saw for ourselves the utterly inhumane conditions that the French used to eliminate their undesirables.

A little history: This island grouping is about ten miles from French Guiana. The French initially thought that this part of Latin America would be a second Eden. Officials promoted it as a place to start new lives–all comers would be apportioned sections of land as an incentive.

About 10,000 people signed up and traveled over. Ninety percent of the initial settlers died within the first few months from starvation, tropical diseases and/or snake/insect bites.

The few settlers still alive found their way to these three islands. They named them the “Salvation Islands” because there was a constant cooling breeze that also eliminated the threat from mosquitoes. To those who made it, the more favorable weather meant hope of staying alive, at least until ships could return to take them back to France.

The French authorities, however, soon saw a far better way to use both the mainland and the islands, and so, their prison system moved here. Also, the French sentenced all their prisoners to as many years as “free men” on the mainland as was the length of the sentence. So an eight-year sentence also meant another eight years trying to survive in “free” French Guiana.

In other words, a sentence to Devil’s Island was a death sentence. No wonder many wanted to escape.

By then, I had already walked by several of the communal prison cells–dank, stone buildings, airless places with little light, radiating heat. There, the more cooperative prisoners were locked up each night, their legs put in chains with an iron rod running through them so they could not move as they slept.

I can’t even imagine how awful it was. Anyway, since the heat was bothering me so, my companions settled me on a path with a beautiful view of the ocean and an adequate breeze. They set out for the rest of the trek to the top of the island where a few more buildings stood, including a hotel that houses those who want to take a vacation on this remote place.

I sat alone, undisturbed in the quiet. We had already seen a few small monkeys playing in the trees, but as I sat there, several came out and scampered around the stone wall on the other side of the walk. One played with a stick and then found a coconut and worked on opening it by banging it on a rock. The photo shows the largest one–probably a howler monkey, who stretched out right in front of me and appeared very relaxed.

When my companions returned with, thankfully, a can of ice-cold Perrier for me, they mentioned that many of the monkeys they encountered higher up were fairly aggressive toward people and admitted they had been worried about me. It dawned on me later that perhaps that large howler monkey, sensing that I was ill as animals are known to do, may have been acting as a guard, effectively saying, “Worry not. I’ve got your back.”

I do remember having no fear, no sense of discomfort, just the fullness of peace and the embrace of a world that is foreign to me. 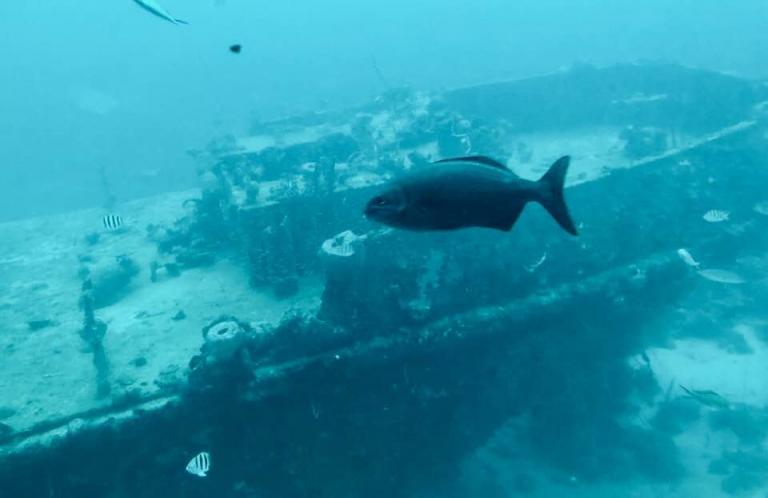 And speaking of a foreign world: yesterday, off the island of Barbados, we went on a submarine excursion. For an hour, we moved along the ocean floor, admiring schools of colorful fish, awed at the many kinds of corals and sponges and stunned into silence at the beauty of a world most, if not all of us, had ever seen before

I caught this photo of a fish swimming near our window as we gazed at a shipwreck–apparently, it went down in 1942, but I didn’t catch the history and there have been many shipwrecks off this island.

And so I think.

As a life-long student, I’ve long been aware that there are worlds of which I have little knowledge. I did eventually decide to concentrate my studies on the Bible and the biblical world. I know a lot but . . . and this is key, I still am a long way from knowing everything even of that world.

Our brief time in the Amazon rainforest, a mostly unexplored area of the world, along with these other adventures, remind me quite forcefully, however, of just how little I know in general.

We don’t honestly know, with absolute certainty, anything.

We must also figure out a way to honor this world, for by so doing, we honor God. And we must discern some ways to treat other humans, even the worst among us, with far more humane methods.

Finally, we must regain humility. As always, I go back to the endless fights over religious beliefs and practices and see the utter lack of humility that characterizes most of them.

It’s time to say, “We really don’t know much but we do know this: how we treat one another counts far, far more than whether we have the “right” beliefs.

But I have little hope of this happening. Pride, the assurance of “I am right, and you are wrong”  has always been and will always be the downfall of humanity. 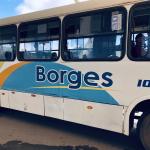 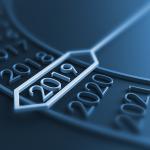 December 28, 2018 The Question For 2019: What CAN I Control?
Recent Comments
0 | Leave a Comment
Browse Our Archives
get the latest from
The Thoughtful Pastor
Sign up for our newsletter
POPULAR AT PATHEOS Progressive Christian
1

A 'biblically based process to mitigate...
slacktivist
Related posts from The Thoughtful Pastor