Sears And The UMC: Both Bankrupt, Looking For Easter

Sears And The UMC: Both Bankrupt, Looking For Easter March 5, 2019 Christy Thomas

Sears and the UMC: both, bankrupt, looking for Easter. GC2019 lit the charge for the explosion for the UMC. The changing notions of how to shop set up the bankruptcy for Sears.

I predict a resurrection for the Methodist world. We shall again develop workable methods so we may proclaim with joy the message of grace. Easter is just around the corner. Lent gives us space to ponder the death that must precede it.

Before this disturbing and likely disastrous General Conference of the United Methodist Church, i.e., the one where the news headlines afterward screamed, in one way or another, “The Methodists Vote to continue to exclude Gays,” my husband and I grabbed a walk in a nearby shopping mall, seeking exercise on an inclement day. 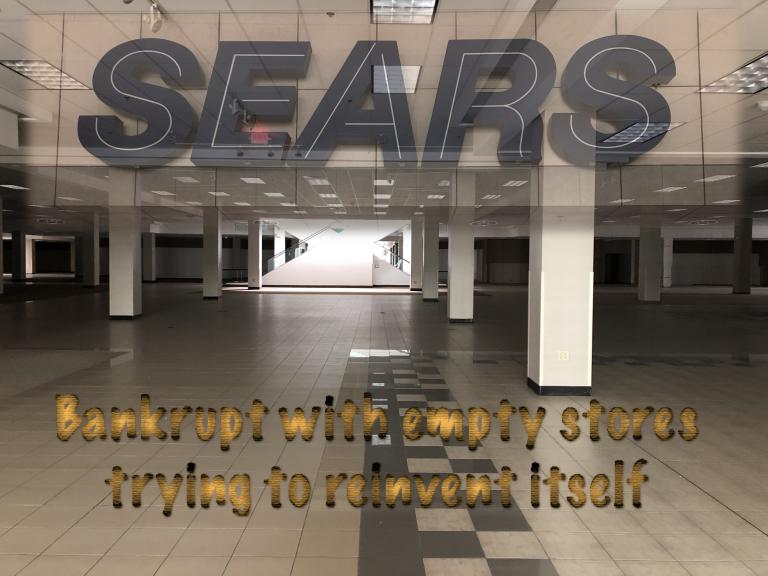 We stopped at the entrance to Sears, now barred off. Peering inside, we saw an immaculately clean, empty space. With the normal clutter of items begging to be purchased gone, the warehouse-like space stretched deep into darkness.

A clean stable versus a messy church

The verse from the proverbs bounced into mind, “Where no oxen are, the manger is clean, But much revenue comes by the strength of the ox.” (Proverbs 14:4, New American Standard Version). In other words, if you want a clean barn, get rid of the oxen because they are messy critters. But if you want to eat, make the best of the mess because you will not survive without those ornery beasts.

Even then, I was guessing at the outcome of GC2019. In the name of a clean manger, i.e., only cis-gendered folk are admitted to the ranks of the ordained, the Good News/WCA/African branches of the church would end up getting rid of the oxen, which in this case, is the younger generation of would-be Methodist leaders in the US.

Should we lose the youth, the current generation of young adults, and the large numbers of LGBTQIA folk who have discovered the beauty of God’s grace poured out upon them in many of our US churches, we lose the “mess” that makes us rich and prosperous in the wild diversity of a healthy church.

At the moment, Sears is seeking to resurrect itself. It leaves behind those cavernous spaces, planning for a more agile structure with smaller stores. They will focus on the things where Sears has historically led the pack, i.e., tools and appliances.

They may or may not make it. The advent of online shopping, niche stores with individualized products, and easy returns has slammed the assumptions of the former behemoth shopping staple. Little that worked before will work now. Their reinvention may prove, however, a road map for what the UMC must do. 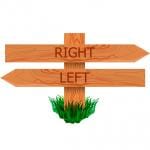 This last GC did land the death knell on the “united” Methodist Church. The only “way forward” now takes us to a decisive fork in the road. The “No gays in the rank of the ordained or legally married”adherents will take the right-hand turn. The “All Means All” coalition proceeds with its march to the left-hand horizon. Burning, empty church buildings will line both roads.

Unfortunately, without staying together, there is no way to afford the current, complicated and expensive infrastructure we have now. Also, it is likely that legal fees will drain whatever reserves may be stashed away.

The accounting nightmare of sorting out the pension complexity glares at us. A clergy exodus threatens that system. Currently retired clergy could easily see their fragile pensions demolished, throwing them into scary poverty.

We could end up with this scenario: 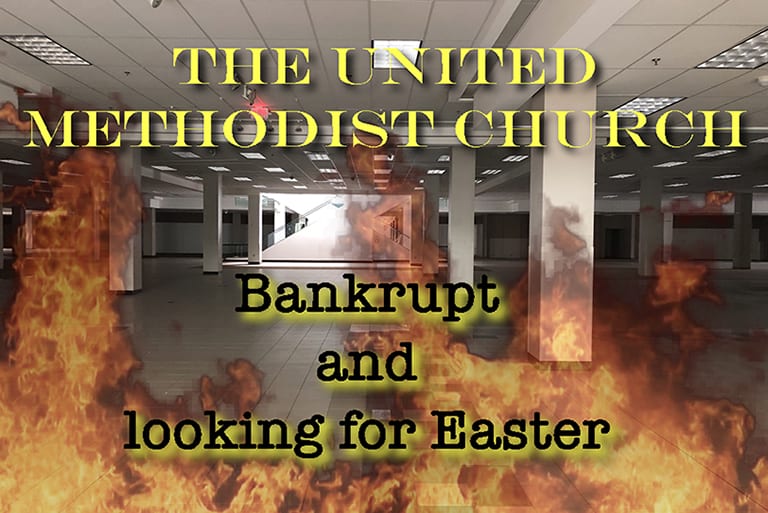 So, let’s talk about the reinvention of Methodism for today’s world. How can we channel our inner “John Wesley’s,” he of the willingness to break rules to spread the gospel in a way that communicated well to his cultural contest; he of the organizational genius; he of the understanding of both the power of and the safeguards of a healthy, vibrant connection?

The complications of this reinvention call for a set of brilliant and creative organizational minds.

Let’s start with just one portion of what has historically connected us: the system of itinerant clergy.

In Wesley’s system, a circuit-riding preacher, carrying with him a few, well-honed messages delivered multiple times in multiple places, rarely made it more than three years. The physical toll of hours on horseback in challenging weather conditions, the constant movement that denied hope of marriage and family, the pittance of the pay: all took their inevitable toll on his men–and in that environment, it had to be male-only.

Ultimately, they had to “locate,” perhaps becoming the shepherd of a single community, with the preaching left to the traveling circuit riders or possibly limited to reading Wesley’s written sermons to the flock.

First, because of the cost of seminary education, many haul around the equivalent of a backpack full of rocks: their crushing debt loads.

Second, the truly “itinerant” clergy generally face a future of moving from small dying church to small dying church, all with minimal pay and coupled with wrenching re-locations for family members or, too often, spouses living apart for extended periods of time.

Each new appointment carries the admonition, “Turn this church around. Never mind the fact that it is in a dying community, bereft of viable employment opportunities, with an unrepairable building loaded with unaffordable deferred maintenance. We know it hasn’t seen a person under 60 enter it in years nor will it because the nursery/children’s areas remain out of compliance with current safety standards and lack desirable accouterments for today’s families. Just trust me; it has potential.”

Third, the “yes I am itinerant but am actually on a career ladder,” of generally young, carefully groomed male aspirants, face another set of stresses.

A few of the often unspoken expectations:

Two factors add to the stress

In a recent Wall Street Journal article, “The Hidden costs of Stressed-out Workers,” two factors stood out to me.

It’s important for schedules to be stable and, when possible, to give employees some say over when they work. In 2015, after retail staff for The Gap clothing chain protested the rising frequency of last-minute changes in their schedules, the company tried a pilot project in 28 stores in an effort to stabilize work hours. The results, according to a report published last year, included a 7% increase in sales and a 5% in increase in productivity.

Two, staff must have input in designing the plan.

Researchers at the University of Auckland studied the experiment and said participation by the staff in designing the plan was pivotal to its success. Because employees were satisfied that they could take care of personal business in off-hours, “The reduced hours meant that employees could sustain a more intensive work pattern, and they were more motivated upon returning to work,” said Prof. Helen Delaney in her report. In their off-time, she added, “Many reported feeling ‘less psychologically rushed.’”

Those two factors alone remain out of reach of our clergy.

For all, no matter how favored they may be, their futures lie in the hands of their Bishops. Bishops can, if enough complaints reach them from dissatisfied church members who specialize in having “pastor on toast” for Sunday lunches, or if they are just having a bad day or giving in to a punitive impulse, yank clergy from one church to another with little or no warning.

Clergy either go where they are told or risk not having a job. No control, no input.

The whim of local congregations sets their financial compensation. They often live with inadequate housing, either because of poorly maintained parsonages or inadequate housing allowances for their respective areas.

Few work less than 60 hours a week. All have constant interruptions in their schedules, often including middle-of-the-night calls.

Did I mention how glad I am to be retired? I loved serving as a pastor. But after my retirement–and I took it early–it took nine months of good exercise, lots of sunshine, and relaxed hours with friends and family to regain a sense of physical vitality.

We need to take care of our clergy, not wear them out

My husband and I own an agency with thousands of people selling the products we market. Our number one priority: the health and happiness of our staff, especially those who live in the precarious world of commission-driven incomes. Their unhappiness becomes our unhappiness. We work hard to make sure they have all the support they need to do their jobs.

In the church, clergy serve as the equivalent of our salespeople. Without their work, the larger church goes under, because clergy raise the money so the non-sales staff, i.e., the many employed in supporting or supervisory roles, can collect their paychecks.

Frankly, I’ve been to one-too-many clergy meetings where I looked around the room and thought, “this is one beat-up, discouraged-looking group of people.” For all the talk of “make sure you follow good self-care procedures,” there’s little in the “methods” of the Methodists that make it possible.

Again, rethinking itinerancy is just one of several thousand difficult decisions before current Methodist leaders. Nonetheless, it appears likely that we stand at a vital “do-over” point.

I’ve realized since 2012 that our current structure is totally unworkable. Even then, I could not see any way through this except to blow it up and start again.

We appear now to be at that breaking point. Our system no longer works. Let be honest about that and unleash the creativity that springs from speaking truth and getting free.

Sears and the UMC: both, bankrupt, looking for Easter. GC2019 lit the charge for the explosion for the UMC. The changing notions of how to shop set up the bankruptcy for Sears.

I predict a resurrection for the Methodist world. We shall again develop workable methods so we may proclaim with joy the message of grace. Easter is just around the corner. Lent gives us space to ponder the death that must precede it. 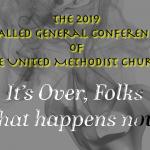 February 27, 2019
It's Official: We Are The United Methodist Church That Hates Gays
Next Post 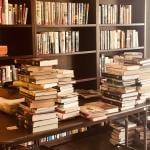