The Gospel Is for Baby Bear: On Sesame Street and Gender Confusion 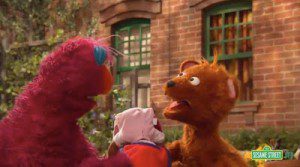 From the front line of the gender battles I bring you…<drumroll>…Sesame Street.

You may be thinking, Seriously? You’re going to blog on a kid’s show and be all super-theological about it? It’s Sesame Street, for crying out loud!

Well, dear skeptical friend, I hear you. I did not imagine that in my work for CBMW I would tackle such high-level topics. But the American cultural conversation on sexuality and gender knows no boundaries, including, but not limited to, Sesame Street.

In Episode 4267, “Baby Bear’s Baby Doll,” from October 2011 (I somehow missed this when it aired), a little boy bear is seen playing with a doll. He’s embarrassed as the camera catches him. Here’s a description of what follow as his friend Telly, a boy, finds him and also enjoys playing with the doll:

While playing with Telly, Baby Bear tries to hide the fact that the baby doll he has actually belongs to him.  When his secret slips, he runs off. Gordon explains to him that dolls aren’t just for girls. Baby Bear returns to find Telly’s enjoying playing with the doll himself.

Later in the episode, a man named Gordon–who lives on Sesame Street with his wife and son–talks with Baby Bear and encourages him not to feel ashamed about playing with a doll [update: not a stuffed animal or a toy figurine, but a little girl’s baby doll, complete with a bottle]. Here’s the dialogue:

BB: So…Gordon…I’m a boy, and dolls are for girls!

You can watch a shortened version of the episode here; you can find longer versions on YouTube, though they’re not copyright-friendly from what I can see.

I grew up watching Sesame Street. That was in an era when it was largely, like much of American culture, compatible with a basically traditional outlook on the world. In other words, you could predict as a Christian parent that many cultural outlets would support, in a general sense, a Protestant worldview. Boys were boys; girls were girls; right and wrong exists; authority figures are good; and so on.

The times, how they have changed. We’ve now transitioned culturally to an era in which the basic foundations of the Protestant worldview are under assault. This is true on many levels, from MTV (obviously) to sexual education in public schools to, apparently, the television shows aimed at tiny kids. This episode, “Baby Bear’s Baby Doll,” is subtly but directly overturning long-held conceptions of manhood and boyhood. Boys can play with dolls; there’s no reason they can’t do exactly what girls do.

The boundaries between the sexes are fluid. Behind this teaching is of course the view that there really aren’t what we call “gender roles” given us as a fact of our existence. Gender is a construct, to use academic language; it’s the differentiated vision of boys and girls our society has historically bought into, but there’s nothing fixed or unchanging behind it. We’re free in this modern and enlightened age to blur the boundaries, and to raise boys and girls in essentially the same ways, without specific training of any kind toward distinct manhood or womanhood.

You can’t make this stuff up. We’re seeing our culture undo itself at the very foundations. Sesame Street is not some backwater cable access program. According to the U. S. Department of State,

Since its first telecast in the United States in September 1969, Sesame Street has evolved into 20 international editions, each with its own unique characters and flavor, and has been broadcast in more than 120 countries, making it the most widely viewed children’s television show in the world. The U.S. version reaches approximately 8 million viewers each week, and has won 97 Emmy Awards (the American prize for excellence in television broadcasting) — more than any other show.

So Sesame Street‘s influence reaches far across this country but also far beyond it. That includes, of course, its unbiblical and socially disastrous teaching on sexuality and gender. God makes mankind distinct from himself, of course, which is our foundation for differentiation. Beyond this, the very first fact of humanity is that man and woman are distinct. Eve is created from Adam, so there is a great deal of genetic material shared between them (Genesis 2:18-23). They are not different species, then, but let’s not miss this: the sexes are different, and it is to God’s glory that this is so.

Sex distinctions, then, are not only brute facts (obvious ones at that, by and large), but are elegant gifts of God.

The Lord made man and woman, Adam and Eve, distinct as an outworking of his intelligence, his lordly creativity, and as a sign to us that differences and distinctions are not bad or evil or unfair. The persons of the Godhead are themselves equal but distinct; so it is with humanity, made in the image of God to his honor and renown (Genesis 1:26-27). This carries all the way through the Scripture, with the apex of this distinctiveness seen in marriage, the picture of the gospel, as a man loves his wife sacrificially, in essence undoing the curse that fell upon humanity after Adam failed in this regard.

Gender distinctions, in other words, carry all the way through, and are the foundation of the social relationship that speaks of the love of Christ for his church.

What does all this mean in regards to Sesame Street? Well, it means that we should laugh at this episode, with its open denial of sex roles and gender distinctions. Boys can play with all kinds of toys, but it is right and good to train them in masculine, not feminine, ways. It’s wrong to train them in such a way as to blur the sexual boundaries God himself created.

I know Christians freak out over stuff sometimes. I’m not encouraging you to spaz about “Baby Bear’s Baby Doll.” I don’t think the world is ending as a result of this episode. I actually think that this show is silly, and worth laughing at, because the God-encoded truth about sexuality and gender is obvious, and boys playing with dolls is foolish (I’m meaning a little girl’s doll, not stuffed animals here). Furthermore, the world–in point of fact–has not ended as of October 2011. So make sure you don’t misconstrue my take or CBMW’s take.

Having said that–Jerry Seinfeld voice–I don’t want to leave you thinking that this sort of social engineering isn’t harmful and offensive to God (and his people). It is. Satan has influence in so many places, including those that seem harmless and fun. We should reject this teaching, and we should boldly and winsomely encourage those around us to do the same. We aren’t those who only speak the gospel, after all, but all the wisdom of God, understanding that the two are actually connected by a golden chain. Wisdom leads to the gospel; the gospel leads to wisdom.

The mind of God, not John Wayne and Queen Victoria, created man and woman, Adam and Eve. This is not an incidental, unimportant reality. This is Life 101. This is ground-floor truth. This is the design of God geared unstoppably to the glory of God and to the flourishing of humanity. We are going to thrive not when we overturn God’s wisdom and creativity, but when we embrace it. The way forward for gender-confused individuals, and a gender-neutral society, is to do just that: return to the truth of God’s Word and the goodness of his created order.

The gospel is for restoration, and it came to the Jew first, then the Greek, and now it must go to Baby Bear and the kids who love him.