The University of Tennessee just made national news by suggesting that faculty use “gender-neutral” pronouns in their classrooms. The Pride Center at UT led this charge and suggested some terms to use instead of “his” and “her”: “ze,” “zir,” and “xe,” which sounds like the name of the most minimalist superhero the world has ever known.

It’s noteworthy that this attempt to remake human ordinariness has been propelled by the on-campus initiative to normalize homosexual orientation and activity at UT. I just wrote a response to this development at The Stream and suggested that this was, well, insane. But Christians cannot merely note what is silly and then leave the room. Here’s what I suggested we do in my Stream essay:

This mission means that we offer witness on matters like this. Whatever our non-Christian professor friend decides to do, Christians are to give testimony to the beauty of complementarity. The glory of God is in the mundane. The design instinct, the exuberant aestheticism of the Creator, is nowhere seen more powerfully than in this short clause: “male and female he created them” (Gen. 1:26). The University of Tennessee may think it has the market cornered on diversity and inclusion. In truth, the Lord got there long before the gender-studies experts, creating both diversity (by creating man and woman) and giving them shared dignity and purpose (by making man in his image).

…UT’s policy would accomplish not merely a renaming, deleterious as that is, but a recreating, the formation of a secular world where there is no complementarity, there is no man and woman, and when you really get all the way down to the heart of the enterprise: there is no God.

The stakes are high when it comes to the mundane. If you stop using gender-specific language, you begin to question whether manhood and womanhood even exist. If you take that step, you lose confidence in biblical gender roles. If you go to that length, you start questioning the biblical portrait of sexuality.

If you press that far ahead, you face the question of questions itself: is there actually an authority out there over humanity? Don’t we just make up our own reality? Isn’t all the stuff about traditional gender roles just cultural nonsense? When you get to that point, though you might not even have known it, you are not far from the precipice. God, after all, is to be searched out and found not merely in dark matter, in the farthest reaches of the cosmos, but in the mundane, the ordinary, the right-in-front-of-us.

This speaks to our apologetics as well as our anthropology, our doctrine of humanity. The classic quest for the divine always seems to shoot toward the outer reaches of the stars. I get that. God is big, after all. But God has planted signposts of his glory–and his existence–not only out there, but right here. You’re supposed to look at a little boy and a little girl and see in each a distinct manifestation of an otherworldly intelligence. This is simple diversity, but in earthly terms, it’s ultimate diversity. You can’t get more diverse than Adam and Eve. And yet the two are equally image-bearers. It’s almost as if God, long ago and for our good, wanted us to have an easily accessible picture of oneness and uniqueness.

The idea that boys and girls are unique and yet equal speak, in ways that are hard to suss out fully, to the presence of a creating God. We need not be the same to possess dignity. We need not blend our bodily identities into mush to taste the happiness of united humanity. We need to be who we are, and speak accurately about who we are. This may seem mundane, but remember: it is in the mundane, in things like ordinary bodies and time-tested pronouns, that we find God. 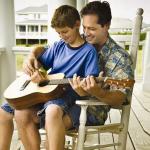 August 28, 2015
4 Ways to Overcome the Feminization of Boys
Next Post

September 9, 2015 Why Complementarianism Is Surging: Introducing the 2016 CBMW T4G Pre-Conference
Recent Comments
0 | Leave a Comment
"And I’d love to read it."
Kenneth Is Critical Race Theory Christian? A ..."
"I have recommended this channel and topic as a very useful one for the Church, ..."
Surfnut Is Critical Race Theory Christian? A ..."
"It is probably good that you have moved on. Are you aware of all that ..."
Steve Wells A New Season: Beginning Work at ..."
"It is indeed a blessing when someone, Dr. Ware in this case, is the man ..."
Archepoimen Giving Honor to Bruce Ware, an ..."
Browse Our Archives
get the latest from
Thought Life
Sign up for our newsletter
POPULAR AT PATHEOS Evangelical
1