John Piper on “Good”: “It Gives Me Hope That God Is Wonderfully at Work”

John Piper on “Good”: “It Gives Me Hope That God Is Wonderfully at Work” June 11, 2014 Owen Strachan 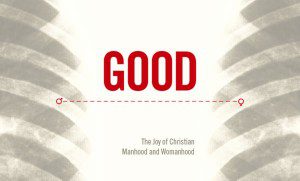 With our dear friends at Desiring God Ministries, the Council on Biblical Manhood & Womanhood just released a new eBook, Good: The Joy of Christian Manhood and Womanhood. This project, available in multiple formats for free, represents a leap ahead for the complementarian movement, as the book includes over a dozen young men and women who share a vision of gospel-driven, joy-saturated complementarianism.

John Piper, cofounder of CBMW with Wayne Grudem, wrote the foreword to Good. Actually, that’s too weak–Piper asked to write the foreword. That’s remarkable, because Piper is asked on a constant basis to do just this. What prompted him to take on yet another writing project? I’ll have him explain from the book:

I asked to write this foreword. I had hoped to endorse this book and help spread the word through Twitter. But then I took a PDF on the plane to Brazil and could not put it down. So I told Marshall Segal, one of the authors, who told the editors: If you’ll take me, I’d like to write the foreword.

Piper elaborates on his interest:

The reason for my eagerness is partly nostalgia, partly thankfulness, partly amazement, partly admiration, and partly hope….Rising in me, as I read, was a high sense of thankfulness to God for the insight, wisdom, giftedness, biblical faithfulness, and courage of these younger authors.

But Piper is not only encouraged by the content. He writes of his genuine surprise in seeing a young generation rise up to champion biblical sexual ethics:

My amazement is that decades into this struggle, there is such a widespread and robust embrace of the beautiful biblical vision of complementary manhood and womanhood. This may strike you as an evidence of small faith on my part. Perhaps it is. But if you had tasted the vitriol of our audiences in 1970s and 1980s, you might understand.

In the late seventies, we were called “obscene” for suggesting that God’s word taught distinct, complementary roles for men and women based on manhood and womanhood, not just competency. Therefore, the breadth and maturity and creativity and joyfulness of the complementarian crowd today triggers happy amazement in me….Reading these voices gives me hope that God is wonderfully at work to exalt his great name long after I am gone.

These are poignant words. They’re moving to me because I, like so many others, count Piper as a father in the faith. Through his books, sermons, and indelible one-off messages (like the life-changing “Don’t Waste Your Life,” an address that gives me chills just writing the title), Piper communicated to me and thousands of other young men and women a vision of life that was all about God, all about magnifying him, but that was also joyful and personally catalytic. I do not exaggerate when I say that this vision was transformative for me.

I did not know the term “complementarian” when I started reading Piper; I first encountered the “blue book” he coedited with Grudem while I trained under Mark Dever at Capitol Hill Baptist Church in 2003. I dipped into it and learned more about biblical gender roles through Bruce Ware and Al Mohler at Southern Seminary. Understanding the Bible’s teaching on gender and sexuality opened my eyes to fresh layers of glory in the Scripture. God’s design was so right, and clarifying, and good. I was hungry for this teaching from the Word. The Word fed me.

Now, as President of CBMW, it is nothing less than a delight to publish Good, an accessible, readable, lively eBook. Jonathan Parnell of Desiring God took the lead in editing the project and did tremendous work. I can’t thank Jonathan enough. The authors who contributed to the book did excellent work. I’m so thankful for their obvious talent and edifying insights, and I can’t say how encouraging it is to see other voices rise up and call biblical wisdom, biblical design, blessed.

In sum, I’m so thankful for John Piper and his teaching ministry. The work he founded with Wayne Grudem is pulsing with life, animated by the person and work of Jesus Christ, and stretching all over the world. It is making a difference not simply on message boards and social media, but in real lives, in local churches, in Bible studies, in college ministries, in youth groups, in after-dinner conversations, in young men and young women who have been confused by a sinful culture about what their manhood and womanhood is for.

The chaos on gender and sexuality in our age is monumental. CBMW, DG, and thousands of complementarian churches and organizations are not going anywhere. We’re standing firm, but we’re not raging against the machine. We’ve been given a glorious vision of Almighty God, maker of heaven and earth, creator of men and women, savior of all who wander in darkness but run, arms open, tears streaming down their faces, at the light that has come into the world.

June 12, 2014 Bowdoin College: Religious Freedom Is "Alive and Thriving"
Recent Comments
0 | Leave a Comment
Browse Our Archives
get the latest from
Thought Life
Sign up for our newsletter
POPULAR AT PATHEOS Evangelical
1

Evangelical
"The Colson Way" Is on Sale for 1...
Thought Life
TRENDING AT PATHEOS Evangelical