I don’t care who can use what bathroom, if you let your child go into a bathroom alone, you’re an idiot. I don’t let my 14 year old daughter go into a public restroom alone. There is a reason why women go to the bathroom in groups, because that’s the safest thing to do.

I was raped as a child by a mechanic, pedophiles come from all walks of life, trans people taking a leak are the least of my worries.

Women also abuse children sexually and men in men’s restrooms have killed little boys. So nothing about this “new development” changes the dangers of predators seeking victims in my humble opinion. The man who raped me was living in the same house as I was and when dinner was over and my mother was washing the dishes, he would sit me on his lap to watch TV like he was spending time with me but instead he was actually molesting me. My mom trusted him, he wasn’t a man dressed like a woman, we weren’t in a public restroom and yet he sexually abused me for years including raping me at the age of 5. Yes, I get the fears of people who have been sexually abused, but that fear doesn’t make me irrationally think that the issue here is trans people, because it’s not. The problem are monsters who sexually abuse children, and that can happen anywhere.

The only thing that this debate does is make Christians look crazy. Especially Catholics because really, we have priests who have sexually abused children, so we shouldn’t let our children go into the confessional alone? That’s crazy, we do it all the time because we don’t assume that all priests are pedophiles. I know plenty of people will be pissed at me for saying that, but it’s true. We have a lot more good priests than bad ones, but really we can’t assume all trans people are sexual predators when we are quick to say not all priests are. This is bait to make Christians look like bigots, stop taking it. Talk to some trans people and see them as human beings for God’s sake.

I completely understand that gender theory and homosexual acts go against Church teaching and why. I get that the reality is we are born male or female and that matters, but the way to get that across to people is with compassion and logic, not with insults and irrational fear of them raping us in the bathrooms at target.

Sending children into public restrooms alone is irresponsible parenting, I don’t care what your position is on transgendered people using whichever bathroom they want to use. Nothing has changed. Also, how exactly is anyone supposed to “prove” that someone is in the wrong bathroom? We are supposed to assume which women are trans and then what? Ask them to drop their pants? Do people even get how absolutely un-freaking-christian that is?! Both of those actions also go against Catholic Church teaching: rash judgement and immodesty. How else can you keep a trans person out of a certain bathroom? You can’t.

We have to live in the world that we live in, not the world that we wished we lived in and we live in a world where gay people and trans people live. They have a right to live in peace without people thinking they are evil pedophiles simply because they are gay or trans. As Catholics we are called to respect their dignity no matter what, we are called to love them (and not the kind of love that tells them how evil they are because that feels good) and to be examples of God’s love for them. At some point we, as Catholics, will have to figure out how to deal with these issues without flipping out. It is possible, at least it should be for people who claim to follow Jesus Christ.

April 12, 2016
Today's Reason for Not Reading Amoris Laetitia
Next Post 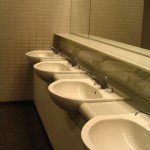 April 25, 2016 Fear, Discussion and Reality
Recent Comments
336 Comments | Leave a Comment
Browse Our Archives
get the latest from
Catholic
Sign up for our newsletter
POPULAR AT PATHEOS Catholic
1

Review of 2021 Remix of The...
Biblical Evidence for Catholicism
Related posts from Through Broken Roses