Tip of the Spear
Evangelical

Engaging the Tension of the Kingdom

The Kingdom of God is at hand. It is right now, in this very present moment.

Just as it was in the now-moment two millennia ago in the ancient Near East when Jesus first announced it, this Kingdom has arrived and in it broken lives are made new. 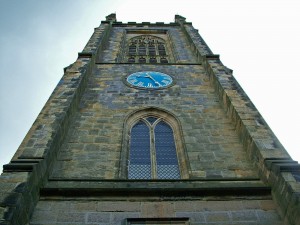 And yet so often this same Kingdom seems elusive. We hope for it but can’t find it. Although it transcends time and space, instead of “now” it is “not yet”. It is a Kingdom that suffers violence, and forceful men must lay hold of it (Matthew 11:12). In this Kingdom we are confronted with an indefatigable tension, particularly when it comes to complex philosophical quandaries and the potent pain of unanswered prayer.

And about that living with eternity in mind thing? Dare I say that for most of us eternity means later, in the very distant future, probably after life on earth is over. But eternity means forever, not later. Forever includes this nanosecond moment in time known as “right now” and what is left of earthly life.

And right now, interspersed with all the beauty of this earthly life there’s a whole lot of darkness, heartache, and suffering. Right now vile cancers and diseases ravenously chew away at families and communities. At this very moment wars and genocides are raging furiously. These things do not exist in heaven, so it appears that although the Kingdom is present and has never stopped advancing, it is “not yet.” As we continue to pray for this Kingdom to come, “on earth as it is in heaven” is a reality we have not seen in its fullness.

So what do we do about this paradox?

Forgive me for overgeneralizing because I know nuances abound here, and in no way is this intended to be an accusation toward any specific person or group, but for what it is worth, I’ve noticed how Christians (myself included) deal with this deeply uncomfortable, indeed often anguishing tension in three ways. And even as I’m still trying to figure out all these mysteries that push and pull at me I’m going to advocate that we aim for #3.

The first is to adopt a sort of fatalistic outlook on life and prematurely ascribe afflictions and suffering to the sovereignty of God. Those who do this often adamantly deny that they are fatalists, usually because they can brandish scriptures supporting their state of being. They’ll jump right to Romans 8:28 before they ever put up a fight against evil in their prayers. But if in fact said believers are tolerating something dark and destructive that God has given us authority over (2 Peter 1:3), something that He never intended for us to have to live with as normal, their conditions usually worsen. Sometimes in a sick way the misery then becomes a source of spiritual pride. If one cannot believe for God’s presence to intervene supernaturally and redeem the seemingly impossible situation because He is always “sovereignly” permitting the suffering, why pray for an end to it if it is something God himself is doing (albeit indirectly)?

People who think like this sometimes wind up concluding that it is almost never in God’s heart to heal, save, deliver, or bless but still cling tightly to their theology because it is the only refuge they have. They live with next to no expectancy for fear of becoming entitled. So with an imperiled prayer life, they unwittingly default to the position that He may be good enough to forgive their sins but that’s about it. He’s really not all that good. It hurts to pray year after year for something that doesn’t change so they put it on God and just wait to die. This is a truly sad, powerless faith.

The second is the opposite of the first. Instead of wearing afflictions as a type of a spiritual honor badge I have observed others try to eliminate suffering in their theology altogether and convince themselves they were never meant to experience any such thing. These are the ones who do adopt an entitlement mentality and in its most repulsive displays we behold a presumptuous, materialistic faith you can hardly call Christian and the banality of this arrogance and greed is often rightly exposed as the fraudulent, religious chicanery it is. A few months ago, this very poignant piece (that I did have a few quibbles with, fyi) in the New York Times outlined this phenomenon, illustrating some of the more profane elements and practices of the prosperity gospel, such as the following:

The prosperity gospel popularized a Christian explanation for why some people make it and some do not. They revolutionized prayer as an instrument for getting God always to say “yes.” It offers people a guarantee: Follow these rules, and God will reward you, heal you, restore you. It’s also distressingly similar to the popular cartoon emojis for the iPhone, the ones that show you images of yourself in various poses. One of the standard cartoons shows me holding a #blessed sign. My world is conspiring to make me believe that I am special, that I am the exception whose character will save me from the grisly predictions and the CT scans in my inbox. I am blessed.

Problem is, life’s not #blessed like that all the time and there are no such formulaic prayers to fix everything. God is outrageously generous and immeasurably good and he certainly can and does bless people with material resources, but those things are not the point of the gospel. Moreover, He tends to do things over the course of many years; there are wondrous breakthroughs sometimes, yes, but with God there’s a long process. And if you are not encountering any opposition, hardship, or resistance, you may know Christ but his Kingdom probably isn’t advancing so much. When God calls a man or woman into his Kingdom the powers against which they begin to wrestle do not translate into a cushy, comfortable existence. He has signed us up for battle. The Holy Spirit was given to us and is called a Comforter because we are going to need one. We cannot escape this.

3. Live in the Tension, Find His Invitation

The third is to be willing to live in this tension of the Kingdom. Living there means consciously experiencing its ups and downs, taking the suffering with the joy. We get both. This is life in the now and the not yet.

This is one enormous learning curve but it does become easier with time if we can learn to yield to His leading. But it’s only going to become easier to yield if we can see what He is actually doing in real time and be willing to follow Him wherever He goes.

And usually when we want to see what God’s doing He breaks our hearts first.

Throughout Scripture one finds that whenever God determines to set right a ruinous situation he would share his own anguish over what he saw happening to his people with praying people, with men and women committed to Him no matter the cost.

David Wilkerson (now deceased) once said that “all true passion is born out of anguish.” Without this tension, without this anguish, there can be no passion, no momentum, no advancing. The now but not-yet Kingdom requires us to engage it. But true joy emerges from anguish. And the joy that was set before Jesus was such a reward that he was enabled to endure the cross. Such is God’s invitation to us today.

Seems to me that if we are ever encounter the goodness of the Lord, we may as well embrace the tension, anguish and all, because in it He calls us to be a part of the restorative work He’s doing.

And that’s where the life is.

June 2, 2016
Recent Comments
0 | Leave a Comment
Browse Our Archives
Related posts from Tip of the Spear