Why Kavanaugh Should Withdraw 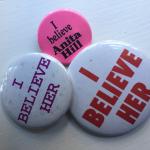 The #MeToo movement marks a distinctive cultural difference between 1991 and 2018. This is obvious in how the public (and the Senate) have responded to Anita Hill vs. Christine Blasey Ford.

I remember the Anita Hill hearings vividly. They were televised live and were on every TV in sight. This was a remarkable feat in 1991 before the era of cable news. Or the phenomenon of “breaking news.”

In an era of blame the victim, Hill’s accusations were definitely breaking news. And, oh boy, was she ever bombarded with victim blaming. Forced to relive some of the most humiliating experiences of her professional life, Anita Hill became a hero.  A generation of women were struck by her willingness to call a public figure to account for his abusive behavior.

Women across the country took to wearing pins that said, “I believe Anita Hill” and simply, “I believe her.”

Unfortunately, Hill was treated to shameful and shaming abuse in front of the entire American public and Clarence Thomas was still confirmed. That is the history of justice (or lack of it) for women who are victims of sexual harassment and sexual violence and assault.

In the wake of Ford’s accusations that Kavanaugh sexually assaulted her as a teenager, fewer people are questioning whether she was assaulted. While this is a cultural step forward, his defenders are also not saying, “Let’s find out if these allegations are true because we wouldn’t want an unrepentant sex offender on the nation’s highest court.”

As we have heard in other #MeToo cases, some people are asking if people’s lives should be ruined by actions they took when they were teenagers. Clearly preparing a line of defense for his nomination if the allegations prove to be true. What his defenders are really asking is whether men’s lives should be ruined by the behavior of their younger selves. No one is asking about the lives of the women who were deeply marked by the violence of these boys.

But prep school boys and other boys of privilege are rarely held accountable in the same way for their abuse of power and physical strength in perpetrating violent actions against their dates or even just women at parties. And Kavanaugh is on record promoting a storied secrecy of the boys club world.

The problem with confirming Kavanaugh “even if he did it” on the premise that men shouldn’t have their lives and careers ruined by the actions of their youth is that if he did it – he has clearly shown no remorse, no recognition of the harm that he caused, nor any understanding of the restorative justice that is required before forgiveness is possible.

Restorative justice is the principal that injustices need to be remedied. When people are victims of injustice, their experience can rarely be undone. Such crimes often include violations of a person’s body, mind, and soul. The body’s memory of rape or sexual assault can never be undone. Just as degrading and demeaning verbal abuse cannot be unheard. The fear and terror associated with these crimes or with a mugging or physical attack cannot be erased or forgotten.

Our culture routinely accepts sexual violence against women as normal. Or at the very least, as a woman’s fault for putting herself in a vulnerable situation. In such a culture, it would not be particularly surprising that the boy who grew up to become Judge Kavanaugh didn’t remember the encounter.

Violent, terrifying, and abusive encounters with boys and men mark the histories and psyches of countless women. Across this country and across the world. The normalization of this violence and the refusal to hold boys and men accountable for violent, sexually aggressive behavior is a symptom of a culture that cares more for protecting male privilege than defending women’s human rights.

Particularly as the Supreme Court is poised to rule on essential matters related to women’s bodily integrity, we need members of the Court who champion the human rights of all people in this country. And we need a Senate that recognizes the severity of violence against women. 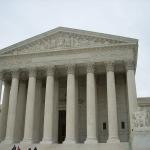 September 4, 2018
Kavanaugh and the Threat to Women
Next Post

September 19, 2018
Recent Comments
0 | Leave a Comment
"Wow, you just sort of proved the whole point of the post -- the harm ..."
Obscurely Why Kavanaugh Should Withdraw
"Not sure why you continue to argue with me over the data. The study I ..."
Rebecca Todd Peters Kavanaugh and the threat to women
"Innocent until proven guilty."
Mr Kish Why Kavanaugh Should Withdraw
"Looks like the ethical and religious points are already covered. Here are some legalistic ones:-- ..."
tatortotcassie How to Fight Right-Wing Abortion Extremists ..."
Browse Our Archives
Related posts from To Do Justice