Two (and a half) Lent devotional recommendations. [Patheos]

How going on pilgrimage cured my millennial malaise. [Spectator]

A book review by James K.A. Smith: How to find God (on YouTube) [LA Review of Books]

Men without conviction, churches without people. “These three episodes illustrate a larger point: “Secularization” is not something that just happened to western Europe, like the Black Death.” [First Things]

“What students know that experts don’t: School is all about signaling, not skill-building” [LA Times]

Silicon Valley’s tax-avoiding, job-killing, soul-sucking machine. “Four companies dominate our daily lives unlike any other in human history: Amazon, Apple, Facebook, and Google. We love our nifty phones and just-a-click-away services, but these behemoths enjoy unfettered economic domination and hoard riches on a scale not seen since the monopolies of the gilded age. The only logical conclusion? We must bust up big tech.” [Esquire]

Jeff Session’s comments on “the Anglo-American heritage of law enforcement” don’t prove he’s NOT a white supremacist. “In that sense, “Anglo-American” is not a racial or an ethnic modifier, it is a deliberately national one—or, at least, it should be. Not everyone has had a week in law school, though, and Sessions’s remarks, which stung many who heard them (the N.A.A.C.P. called them “racially tinged”), were clearly clumsy.” [New Yorker]

A throw back rendition of Three Dog Night’s “One.” Man, I miss the 60s. If you were wonder, Three Dog Night can still rock it out… and their videography only gets better with time. Happy Valentine’s Day! 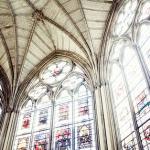 February 14, 2018
Two (and a half) Lent Devotional Recommendations
Next Post

What is Pentecost? Why Does It...
Mark D. Roberts
Related posts from Transcendentalish