For Black people growing up in America, many frequently find themselves born into violent, poverty-stricken neighborhoods. Systemically enduring struggles of a lackluster school system, the pain of police brutality, gang conflicts, overwhelming poverty stemming from mass unemployment, incarceration and all around desperate social conditions.

Psychology depressed hoping to live past eighteen years of age while navigating a life of brutality and profound misery; in the wealthiest nation on earth, they live in utter poverty.  The brain starts rationalizing early death; numb to the tears of Black mothers as they watch in horror the carcasses of their dead sons laying on the simmering concrete, bordered by yellow police tape as paramedics haul away another lifeless Black life because of the latest gang conflicts. If the child just so happens to escape this paradigm the world watches the evening news just to be entertained by Black youth corralled off into the ever growing prison industry complex

Black Men & The Inevitability of Prison

An essential element of Black life within the ghettos of America is coming to grips with the inevitability of prison.  In Soledad Brothers, a book which chronicles various letters black political thinker, George Jackson wrote while incarcerated.  George Jackson writes, “Black men born in the U.S. and fortunate enough to live past the age of eighteen are conditioned to accept the inevitability of prison.“

Similarly, Malcolm Little stated while incarcerated that the Honorable Elijah Muhammad taught him,”The Black prisoner…symbolized white society’s crime of keeping black men oppressed, deprived and ignorant and unable to get decent jobs, turning them into criminals.”  In order words, the imprisonment of black people is something which is not accidental but curated by design and very deliberate.

These observations also hold true within Hip-hop,  New York’s own Queensbridge poet, Nas describes “ghetto prisoners” as people who are “trapped in slums” and “headed for nothing but the state pen, where they cousin be waiting.”  This mass incarceration of Black people is something which impacts entire families, it is systemic.

Understanding the Role of Prison
Loic Wacquant, a sociologist currently serving as a professor at UC Berkley wrote in his article Deadly Symbiosis: When Ghetto and Prison Mesh posits that the Ghetto-prison system functions as a new peculiar institution or plantation for Blacks who serve no economic utility. The era of globalization gave birth to a new peculiar institution known as the ghetto-prison system in which jobs were outsourced overseas, and the economy of the metropolis transitioned from manufacturing to knowledge-based services.

Thus, Wacquant notes that, “for the first time in American history, the African American was no longer needed in the economic system of the metropolis.”  The current mass imprisonment of black youth exists then in Wacquant’s analysis as a “recruiting of the American state to suit the requirements of neo-liberalism.”  But the ‘black question’ for the United States government is what is to be done with this disposable ghetto population who inevitably turn to drug-trafficking and gangs  as a result of them having no place in the economic system.

Islam’s Role In Breaking the Cycle

Yet, Tupac Shakur in his classic poem, describes a social reality which served as a resistance to the entrapment of blacks within the prison system.  With a nostalgic reflection on his upbringing in the environment cavalierly “termed” ghetto’s, Tupac Shakur describes an unnamed friend saying,”We was once two nigg-s of the same kind, quick to holla at a hoochie with the same line.”  Engaging in delinquent activity prevalent within many American ghettos, Tupac states his friends began selling drugs and carrying guns, which eventually earned him a prison a sentence.
With his friend incarcerated the young man began to transform his life.  Tupac Shakur describes in his classic song titled “I ain’t mad at cha” how he recognized his friend’s growth. Tupac states” Collect calls to the crib, sayin’ how you’ve changed, Oh you a Muslim now, No more dope game?  Having received the message of Islam behind prison bars, it corresponded with moral reformation. Highlighting this moral change within his friend, Tupac states his friend now,” Wanna go to the mosque, don’t wanna chase tail.”  Due to Islam Tupac proclaims, “It seems I lost my little homie, he’s a changed man. Hit the pen and now no sinnin’ is the game plan.”  This poem of Tupac is a testimony to the transformative impact that Islam has upon black people who are victims of the prison industrial system and its role is reversing the recidivism cycle.

Toward an Islamic Resistance to The Prison Industrial Complex

This is where the prison system comes into place; according to Wacquant it functions as “a human warehouse wherein are discarded those segments of urban society deemed to disreputable, derelict, and dangerous.”  However, it is the Islamization of black prisoners serves as resistance to the prison system. Embodying this Islamic resistance to the prison industrial complex, Malcolm X said,” I had sunk to the very bottom of the American white man’s society when-soon now, in prison-I found Allah and the religion of Islam and it completely transformed my life.’”

For even while incarcerated, Malcolm states “months passed without my even thinking about being imprisoned. In fact, up to then, I never had been so truly free in my life.” Through Islam, despite being incarcerated, Malcolm X reports a feeling of freedom that Islam gave him, and that liberalism deprived him of and left prison wanting to empower his community.

Islam is a liberating faith which can lift those who are in in the mud of society. Islam as a praxis challenges the disciplinary logic of the penal state. In resistance to the ghetto-prison peculiar institution of America, Dawah to black prison inmates and Islamic educational initiatives to Black Muslims who are incarcerated, which address their contemporary political, social, and spiritual realities living under the tyranny of a white supremacist society, should be the objectives of Black Muslims. Let us fight the prison industrial complex, through one shahadah at a time!

Let us work to spread Islam in the trenches of the Ghetto-Prison peculiar institution!

Let us work to uplift those Black lives destroyed by the prison system through the Qu’ran and Sunnah of Prophet Muhammad(pbuh)! 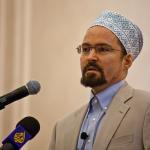 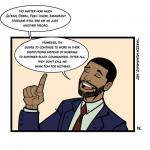 August 25, 2017 Is Your Imam an Uncle Tom?
Recent Comments
0 | Leave a Comment
Browse Our Archives
get the latest from
Muslim
Sign up for our newsletter
POPULAR AT PATHEOS Muslim
1