France’s System White Supremacy & The Qu’ran of the Oppressed

A growing anti-Islam movement has emerged in France calling for removing certain verses from the Qu’ran.  Alleging the Qu’ran incites individuals to violence, the movement has been endorsed by France’s former president Nicolas Sarkozy and 300 other prominent public figures and politicians in France.

The effort to ban certain verses in the Qu’ran comes at the backdrop of other efforts to ban the Burkini, a garment Muslim women use to go swimming while still adhering to Islamic codes of modesty as well as the hijab in public school. Tellingly, the French government also sought to ban Malcolm X.

A 1965, New York Times article, titled  France Bars Malcolm X reported that a spokesperson for France’s foreign ministry stated that Malcolm X’s visit to the country could upset the “public order” and thus he would be disallowed into the state.

Of course, this upsetting of the  public order is a euphemism for Malcolm X’s ability to challenge the white supremacist status quo and the colonial grip that France had on African people. To fully understand efforts of France to ban verses of the Qu’ran one should turn to Malcolm X’s historic speech: Message To The Grassroots.

In that speech, Malcolm X introduced us to the house slave who acquiesced to white supremacy  and juxtaposed this with the field slave who fiercely resisted white rule at every turn. The field slave in Malcolm’s analysis was constantly seeking to runaway from the slave plantation and to resist the slave master at  every turn.

Malcolm X himself stated, “I’m a field slave” though living in the era of Jim Crow. This entails that in all social and political arrangements that uphold white domination the field slave represented a way of being  that sought to resist white supremacy at every turn.

To the dismay of the slave master, Malcolm X posits that the Qu’ran, the divine text of Islam, would incite more Black folks to embody the defiant spirit of the field slave due to its emphasis on self defense and resisting oppression. In reference to Qu’ranic edicts on resisting oppression, Malcolm X declared, “nobody resent that kind of religion being taught but a wolf, who intends to make you his meal.”  In other words, the Qu’ranic injunctions inciting the masses of oppressed Black people to rise against oppression, naturally would be resented by those seeking to maintain this unjust system of white rule.

The constant accusation that “Islam is a violent religion” can result in many Muslims developing an apologist mentality with Muslims being constantly on the defensive to reassure their former colonizers “no, we are peaceful.” This apologist mentality results in a de-contextualization that trivializes  and white washes the historic and continual genocide, colonization, and enslavement propagated by white Europeans against Muslims and facilitates a violent absolution that lets the aggressor play the victim. Moreover, it results in a subservient relationship with Muslims constantly forced to prove their humanity.

The Muslim who adopts Malcolm X’s mentality of the field slave rejects this framing all together.    Muslim field slaves knows that while France’ boast of the French revolution which came to solidify the secular liberal values that France proudly seeks to boast of today, it was  Malcolm X who declared that “[t]he French Revolution was all about white nationalism.” The Islam of the field slave does not concern itself with the white gaze, for it was Malcolm who expressed solidarity with the Black people of West Africa who were “being colonized by the French.”

After all, secular liberalism did not stop France from behaving like a wolf brutally colonizing Black Muslims in the Senegal torturing and exiling black Muslim Ahmadou Bamba who actually lead a completely non-violent struggle against white colonial rule nor did it stop the French colonial government  from establishing the illegitimate settler colony known as French-Algeria, which much like Israel today,  massacred and oppressed its indigenous Muslim population killing 200 Algerian protesters marching for their right to be free of white colonial domination.

Discussing France’s oppression of Algerians, anti-colonial thinker Frantz Fanon stated “we revolt simply because for many reasons we can no longer breathe.” The field slave of today is cognizant of how France’s colonial relationship with Black people has evolved yet is still in tact.

Indeed, France’s looting of wealth  is not limited to West Africa. The Black people of Haiti, now the poorest country in the Western Hemisphere, was forced to pay France $21 billion dollars after obtaining their ‘independence.’ Additionally, France grew wealthy as a leading supplier of weapons for the  racist state of apartheid South Africa.

Instead of focusing on banning these manifestation of neo-colonialism, France’s former president Sarkozy has dedicated his attention to banning the burkini, an Islamic garment Muslim women wear to go to the beach! Sarkozy expresses the belief that the burkini is incompatible with French values and that “we  don’t imprison women behind fabric.” Yet, it would appear France is perfectly content with imprisoning masses of Black people, including Black women, through colonial taxes and wealth looting.

It is telling that 300 public figures and politicians in France can join forces to petition to ban verses from the Quran yet there has been no such petition to ban the colonial tax that France imposes upon Black people. Indeed, where are the petitions calling for the  French government to pay Black people reparations for the hefty profits it developed through its  arm deals with apartheid, South Africa?

Malcolm X’s analysis still holds true: the French colonizer resents the Qu’ran for it is a wolf seeking to devour Black people, our wealth, land, and resources like sheeps. The French government is complicit in violence-both structural and physical upon Black people. Muslims should turn to the Qu’ran,  rooting themselves Islamic critiques of neoliberal economics and Islam’s emphasis on economic justice to struggle against these manifestations of  French neo-colonialism.  Muslims must hurl truth at false to challenge France’s attempts to moralize upon Muslims. 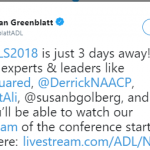 May 6, 2018
When Muslims Join Forces with an Anti-Black Hate Group.
Next Post 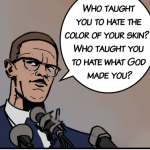 May 30, 2018 Dawah in 21st Century Black America: A Message to Muslims
Recent Comments
0 | Leave a Comment
Browse Our Archives
Related posts from Truth to Power 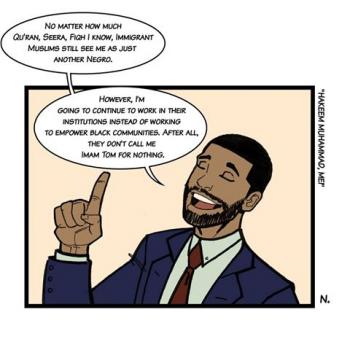 Muslim
Is Your Imam an Uncle Tom?
Truth to Power
TRENDING AT PATHEOS Muslim