New Year’s Resolutions in the Valley of Dry Bones 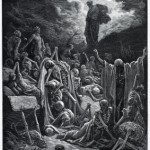 Reports are out that we barely avoided the fiscal cliff. But will the deal keep us from eventually falling into a valley of economic decay and death? Legislation may be under way for a bill to ban certain guns and put in place measures to help guard against mass shootings in public places. But will legislation alone keep the slaughter of innocent bystanders from occurring? You and I may have made various New Year’s resolutions to eat and drink and smoke less. But will we actually live more?

I am reminded of Ezekiel’s response to God who asks him if the very dry and dead bones in the valley of slaughter as on a battlefield could ever live again (Ezekiel 37:1-3). Ezekiel says, “Sovereign Lord, you alone know” (Ezekiel 37:3). I am struck by Ezekiel’s state of dependence on God. He does not despair of God, but he realizes that all the human ingenuity, will power and hard work can never bring about the necessary enlightenment to accomplish the task of raising these dry bones to life.

Some have called for a return to a Christian nation—that everyone becoming Christian or that everyone adhering to the Ten Commandments—will help us come to terms with our problems and bring us back to life as a nation in this new year. I am not so confident. Such answers appear too simple, too tidy, and perhaps too menacing. Absolute power in the hands of any one religion or political party for that matter has a way of creating an abuse of power. To me, the biblical or Christian thing to do at the beginning of this new year is to begin with a confession of God’s sovereignty and our utter deficiency and lack of power when faced with various versions of the valley of dry bones. After all, we all have skeletons in our closets that need to be brought out into the light of day. We all contribute to the economic problems with our greed and the violence with our anger and silent or outspoken rage.

Can this nation or you and I ever live again? Only God knows. God prophesied through Ezekiel that he would raise to life the bones of his people Israel and restore them to the land (Ezekiel 37:11-14). Perhaps the most important New Year’s resolution is to confess daily our sense of utter dependence on God for divine intervention in our own nation and in our own lives. Otherwise, no matter what else happens, these bones—especially our own—will remain very dry.

December 29, 2012
Saying Goodbye to Entitlement Thinking and a Classless Society
Next Post