Zombie Mania—How It Affects Us All 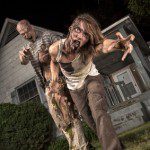 There’s so much interest in zombies today due to The Walking Dead television series and video games with zombies, among other things. In preparing my piece on Ezekiel’s vision of the valley where the vast army of dry bones comes to life, I even came upon a reflection comparing this army to zombies. Zombie mania.

Zombie mania raises all kinds of interest on a variety of subjects, including questions about the afterlife and the relation of the soul to the body. What’s the difference between a zombie and a person bodily raised from the dead? Generally speaking, zombies have been cast as having no consciousness and whose bodies are not transformed. They are quite simply the walking dead. For some, the Christian notion of an embodied soul and the resurrection of the body is as fictional as the concept of a zombie-state. Regardless of what one makes of these concepts, what is not so fictional is the ethical import that such concepts generate.

What’s the difference between killing a zombie and killing a human? If zombies were to have consciousness, what import would this have for video game shootings, where mesmerized youths and adults go into a zombie-like state of gunning down these walking dead eating machines? It’s one thing to shoot up a bunch of walking corpses; it’s quite another to bludgeon human characters, no matter how fictional they are. My friend John Morehead, who has written on zombies (See for example his co-edited work, The Undead and Theology), drew my attention to the first episode of The Walking Dead, which includes a segment where a man’s dead wife comes back as a zombie. She shows signs of possible memory, as she returns to her house and looks in the keyhole. The husband wants to kill the zombie form of his dead spouse, but cannot bring himself to pull the trigger on his gun. Would we pull the trigger or pull the plug in video games or in reality if there really were zombies with consciousness? Would we pull the trigger or plug if we weren’t talking about zombies, but about people who were brain dead, or if we viewed people’s conscious state as nothing more than a bodily, material function?

Now if humans were not to have souls or a state of consciousness that is more than a bodily material function, but were simply eating and consuming masses not yet dead, why not shoot them up? Is there anything sacred about the material mundane beyond mere sentiment and emotional associations that we make with certain human bodies we prize? How does killing zombies affect our consciousness as humans? How do such killings and the questions about them affect our consciousness of other humans?

Fictional or not, could it be that zombie mania suggests that we are all wired to long for something more than mere matter and more than only one shot at life, including perhaps the resurrection of the body and the fundamental union of souls with bodies? When noble fictions or doctrinal truths such as these are jettisoned or longing for them suppressed, what rational and ethical grounds are left to safeguard against zombie mania leading our culture into a zombie rampage killing spree?

January 2, 2013
New Year’s Resolutions in the Valley of Dry Bones
Next Post