Shooting from the Hip: Catholics, Evangelicals and Gun Control 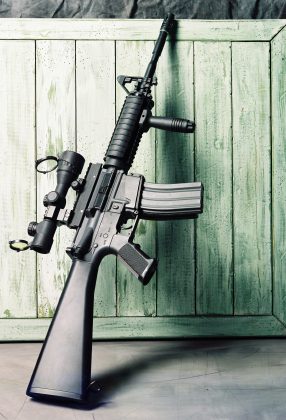 I am grateful to the Christian Post Blog Team for its invitation to me to write a piece calling for Evangelicals to develop a consistent pro-life stance that accounts for gun control. The following entry is my response to their invitation:

The U.S. Conference of Catholic Bishops have exhorted Evangelicals to develop a pro-life stance on gun control. They argue that “the growing preponderance of lethal weapons on the streets” is a pro-life issue that deserves the same kind of attention as abortion. Christian conservatives have often resisted those environmentalists who have sought to brand mercury pollution as a pro-life issue. Will Evangelicals by and large resist similar attempts to view gun control as a pro-life issue in spite of the recent mass killings in Newtown, CT, and elsewhere?

In response, I believe it will be very difficult for Evangelicals to develop such consistency, and for a variety of reasons. Here are two reasons. First, we do not have a well-developed theology of life and/or public theology. Unlike Evangelicalism, the Catholic Church is known for its consistency in affirming a pro-life stance on a variety of issues, including abortion, euthanasia, capital punishment, and gun control. We are more agenda-driven than the Roman Catholic tradition given our failure to seek to provide a rigorous, sustained, comprehensive model of a theology of life. As a result, we are more prone to shoot from the hip on issues and ask questions later.

Second, another reason is that the Catholic Church has an authority structure in place that helps it craft a consistent series of platform positions on important ethical topics. While Catholicism has orders that began as movements, Evangelicalism as a whole is a movement without an overarching, orderly structure. Charismatic leaders, not cardinals, bishops, popes and ecclesial traditions, often serve to drive the Evangelical movement. Movements like this one experience greater levels of ambiguity and inconsistency as a result.

So, would it ever be possible for Evangelicals to move beyond shooting from the hip to develop a consistent theology of life? Might a more consistent approach start with a call not to take another person’s life? The Evangelical movement has often argued that it is wrong to take the life of a fetus. No matter if there are disabilities. No matter if there is a lack of opportunity awaiting it after birth. No matter if its environment will have a negative impact on it and through it on others. Apart from extreme circumstances such as a threat to a mother’s health or rape as the cause of impregnation, Evangelicals tend to shoot down arguments made in support of abortion. Why don’t we do the same with gun control?

Perhaps there is a place for arguing that one could own a gun and use it to kill an intruder who is trying to harm one’s family member; still, it only takes one bullet to do so, not thirty rounds. Legally, Americans have the right to own guns, but should we have the right to stockpile guns with multiple magazines and ammunition? At least in the case of abortions, the person performing one–a doctor–is not doing so accidentally or randomly or in rage, as in the case of many of the senseless civilian gun deaths in our culture.

No matter what the United States government might say (and the founding fathers were not even thinking about semi-automatics or the likelihood of guns that someday will be able to fire nuclear bullets), the Lord Jesus does not say anything about the right to take up arms to kill anyone–not even exemptions! While Jesus does not talk about abortion either, he does say quite a bit about turning the other cheek (Matthew 5:38-39) and laying down one’s own life (John 15:13, for example), not that of another. Although what Jesus is recorded as saying does not provide answers for every question on ethical stances on gun control and abortion, his words should at the very least cause us some angst on using guns on others and stockpiling guns and ammunition as Christians. The greatest virtue, of course, is learning to wrestle with Jesus’ words and actions, rather than discounting them. Any efforts toward creating consistent stances and ethics should be, first and foremost, based upon Jesus’ teachings. I will admit that I often struggle to honor Jesus’ words, such as loving my enemy and praying for those who persecute me (See Matthew 5:44).

Before I close this post, I want to make clear my intent. I am not trying to shoot down in some random and pointless manner the arguments of those advocating against greater gun control. I don’t want to be guilty of shooting first, senselessly seeking to destroy the positions of those who argue differently than I do. Perhaps my arguments are not bullet-proof, but I do present them in good conscience and without intent to do harm. All of us, myself included, should open ourselves up consistently to sincere questions about our respective positions on policy and making it possible for healthy discourse on such matters as gun control. If we ever want to move our society beyond the rise in senseless deaths, we will need to become much more consistent on not meaninglessly shooting down other positions. With this point in mind, it is important that I state that I believe both sides–those who advocate for greater gun control and those who advocate against such control–wish to affirm the right to life and guard against senseless deaths. Which stance helps us get there more effectively, which stance is more consistent and more rationally sound, is what we should seek to discern and put in effect, pursuing truth wherever it leads us, regardless of what it spells for ideologies and agendas. Civil and constructive discourse that takes us beyond simplistic and illogical agendas to consistent and comprehensive positions is in order.

Still, in the end, after all the position statements have been written and intellectual consistency in whatever direction is attained, we still must account for the complexities and frailties of human life; human life is not a position statement. Even the adherent of the most consistent position must come face to face with the facts that one does not know how one will respond in the moment when faced with life and death scenarios. If we are not aware of the potential within each one of us for irrational reactions during crisis situations, we will likely be the ones most prone to shoot first from the hip.

April 2, 2013
The Jesus Matrix and Mars Hill
Next Post

April 9, 2013 Illegal Questions, Part I
Recent Comments
0 | Leave a Comment
"Most conspiracy theories are actually observations of conspiracy facts . Facts that prove conspiracy that ..."
Truth-Road LessTravelled Conspiracy Theories: Harmful and/or Healthy?
"Except Christians didn't invent human rights, or morality. That you believe so, or that Hitlers ..."
Truth-Road LessTravelled MLK’s Faith: Inspiration to Keep Going ..."
"Human rights are a "Christian" invention at best.Logically, there are no human rights, dog rights, ..."
bill wald MLK’s Faith: Inspiration to Keep Going ..."
"Your view..."They were marching to gain sympathy and political power and, I suppose, it boosted ..."
Truth-Road LessTravelled MLK’s Faith: Inspiration to Keep Going ..."
Browse Our Archives
Related posts from Uncommon God, Common Good