Why Didn’t God Become a Dog? 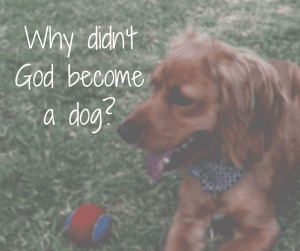 The other day I asked my students in theology why God became a human rather than a dog. The point of the question was to get them to think through the theo-logic and significance of the incarnation.

In our generation, we don’t think often of terms like nature and essence; so talk of Jesus being of the same nature as God in his deity and the same nature as us in our humanity does not always seem so important to many. Rather, we are often taken with categories pertaining to existential, psychological and social dimensions like relatability: can God identify with us and relate to us on a human level? Given that some or many people feel that they find more empathy from their pets than other persons, they relate better to animals like dogs or cats. Thus, I asked my question: Why didn’t God become a dog if he wanted to relate to us?

Whether or not you feel like you can relate well to dogs, research is now available that lets us know that dogs that are family pets relate more to their masters than their own kind (See “Brain Scans Reveal What Dogs Really Think of Us”). So perhaps, dogs would rather I frame the question as “Why can’t dogs become human?” (!) A student who informed me about this research shared that he is dyslexic and as a result he sometimes reads God and dog as the same thing. So, he joked, the distinction does not always appear so significant! Another student shared after class that he could not answer why it was important for God to become a human and not a dog until he knew what kind of dog I had in mind. For him, it would be more plausible for God to become a dog if the dog in question were a dachshund—after all, he has one!

While God could have become anything, I suppose, since God is God, the divine Word became human flesh (John 1:14). While the whole of creation is good as created by God, God only created humanity in the divine image. For St. Athanasius, humanity reflects the divine Word in its possession of reason. Given the fall, there was a divine dilemma. God could not go back on his word and preserve humanity from death in its fallen state. Nor would it be imaginable for God to allow those who reflected his image to perish in its state of corruption. St. Athanasius writes in On the Incarnation (De Incarnatione Verbi Dei),

… because death and corruption were gaining ever firmer hold on them, the human race was in process of destruction. Man, who was created in God’s image and in his possession of reason reflected the very Word Himself, was disappearing, and the work of God was being undone. The law of death, which followed from the Transgression, prevailed upon us, and from it there was no escape. The thing that was happening was in truth both monstrous and unfitting. It would, of course, have been unthinkable that God should go back upon His word and that man, having transgressed, should not die; but it was equally monstrous that beings which once had shared the nature of the Word should perish and turn back again into non-existence through corruption (Taken from chapter 2, “The Divine Dilemma and Its Solution in the Incarnation”).

C. S. Lewis, who wrote the introduction for this edition of Athanasius’ work, is well-known for his many literary works, including the Chronicles of Narnia in which the Emperor’s (i.e., God’s) Son appears as a talking lion. While my daughter thinks it would be strange to worship a dog at church, perhaps those infatuated with Lewis’ Narnia tales would not find it difficult to worship a lion. Can humans have solidarity with dogs and cats, like they can with humans? While figuratively speaking, Jesus is a very big cat in the Bible as the lion of the tribe of Judah (Revelation 5:5), he is only divine and human. The comparison to a lion begins and ends with majesty and the connotation that a lion is the king of the beasts; Jesus is majestic and Lord of all.

For Athanasius, the Word had to become flesh to heal our humanity as those created in God’s image and not allow us to perish in our corrupt state. While dogs are not created in God’s image, we who are image bearers are called to care for all animals as those who have dominion in the creation (See my blog posts titled “Tree Huggers and Puppy Kickers”). Moreover, given that humanity is the microcosm of creation according to the Eastern Church theologian Maximus the Confessor (and no doubt, for Athanasius, though it is not explicitly stated in his writings, as far as I know), the healing of our humanity bears upon the whole creation. After all, the whole creation groans, awaiting our redemption (Romans 8:19-22).

The question at the outset of this piece should not cause us to groan; it is by no means lame. The question should cause us to take to heart the significance of the Word’s incarnation as human: if God’s Word could create animals like dogs with whom people can relate so well (“Man’s best friend”), just think how much God’s very Word could relate to us, if he were to become human, which he did. In closing, let’s return briefly to Athanasius. The Word became what we are so that we could become what he is: “… the Word of God Himself. He, indeed, assumed humanity that we might become God” (See On the Incarnation, Chapter 8, “Refutation of the Gentiles—Continued”).  We can debate what is involved with “that we might become God” (what is called theosis or divinization) all we like; still, may we not confuse God and dog at this point or groan and howl but take to heart that we are made partakers of the divine nature (2 Peter 1:4). As difficult as it might be to fathom such a great mystery, we should be able to relate. After all, it is our destiny, when faith becomes sight.

Maybe some of us will never be able to look at our family pets the same way again at Christmas, as we celebrate the mystery that the Word became human. Regardless, may we always look at the incarnation anew, and never as old news. In this way, we need to be like dogs that are faithful pets: love for their masters never gets old. 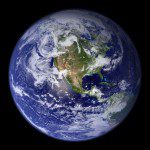 December 8, 2014 Ode to Eric Garner: “Can You Breathe Now?”
Recent Comments
0 | Leave a Comment
"Let's not erase our history!https://uploads.disquscdn.c..."
Robert Conner What Does the Future Hold? Being ..."
"" Consider Colossians with gnostic spirituality involving secret knowledge and accompanying abuse in the life ..."
Christiane Smith QAnon, Evangelicals and Conspiracy Theories: What’s ..."
"Biden will not be better.Biden is for infanticide.But if God/Jesus allows Biden to become president ..."
D.M.S. Jesus, Buddha, and the Impeachment of ..."
"Yes"
Marcus Jesus, Buddha, and the Impeachment of ..."
Browse Our Archives
get the latest from
Uncommon God, Common Good
Sign up for our newsletter
POPULAR AT PATHEOS Evangelical
1