The Tortoise, the Hare, and TBI: the Race Is Not Always to the Swift

I have always been struck by John Steinbeck’s attention to detail in chronicling the slow, ponderous, steady movement of the land turtle in his classic novel, The Grapes of Wrath. I’m no Steinbeck scholar, but I think the turtle serves as a metaphor or analogy of the migrant workers making their way from Oklahoma to California during the Dust Bowl period of the 1930s. The migrants faced many obstacles and hurdles, but they kept moving. Slow going, but incredibly resilient. This is a post on resilience in the face of TBI.

I have also been struck by my wife’s love of rabbits who sometimes visit, even inhabit, our yard. If she had her way, our backyard would be a rabbit refuge. Like turtles, rabbits are very resilient. You can see my wife’s love of rabbits in the accompanying photo. A stuffed rabbit takes refuge under each of our son Christopher’s arms. Like turtles and rabbits, our son Christopher who has suffered from TBI since January 2021 is incredibly resilient. 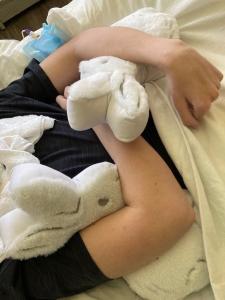 Early on in Christopher’s saga with TBI, a well-meaning but insensitive hospital nurse who operated from a cup half-empty standpoint said to me over his bedside, “Only the reptile portions of his brain are working.” She was speaking of the brain stem, which overseas breathing and other essential bodily functions. At that point, Christopher was breathing on his own. Later, I shared her assessment with our medical consultant, Dr. Potter. He responded: “Healing must begin somewhere. What good is consciousness if you cannot breathe?” The good doctor operates from a cup half-full mindset.

In March of 2021, I wrote the following in a post at Patheos titled “Approaching Critical Care Situations with a Glass Half Full”:

Dr. Robert Potter (M.D., Ph.D.) has noted repeatedly in analyzing his condition with us and the medical professionals overseeing my son’s care, the base stem and midbrain functions are working to support Christopher’s life, for which we are most grateful. We wait to see how the brain responds and if higher functions return. Those who operate from a glass-half-empty paradigm may minimize the import of my son breathing on his own and his heart beating strong. It is certainly true that breathing and heartbeat functions are the most basic or primitive facets of brain activity. However, as Dr. Potter argues, if the base or stem and midbrain functions are not working, consciousness does you no good. So, we wait and see if consciousness returns.

Since that time, a neurologist informed us that Christopher became minimally conscious. More recently, an astute therapist at Christopher’s facility reported that he is more alert or awake than in prior speech therapy sessions. Still, he has not achieved a “standardized, consistent and replicable response.” At least, not yet. Cup half-full all the way.

Now, I would have taken it as a great compliment if the hospital nurse had intended her statement on reptiles to refer to land turtles. Christopher is like a land turtle. You have to be like a land turtle to make headway with TBI. Consider the following lines from chapter three of Grapes of Wrath:

And over the grass at the roadside a land turtle crawled, turning aside for nothing, dragging his high-domed shell over the grass. His hard legs and yellow-nailed feet threshed slowly through the grass, not really walking, but boosting and dragging his shell along. The barley beards slid off his shell, and the clover burrs fell on him and rolled to the ground. His horny beak was partly open, and his fierce, humorous eyes, under brows like fingernails, stared straight ahead. He came over the grass leaving a beaten trail behind him, and the hill, which was the highway embankment, reared up ahead of him. For a moment he stopped, his head held high. He blinked and looked up and down. At last he started to climb the embankment. Front clawed feet reached forward but did not touch. The hind feet kicked his shell along, and it scraped on the grass, and on the gravel. As the embankment grew steeper and steeper, the more frantic were the efforts of the land turtle. Pushing hind legs strained and slipped, boosting the shell along, and the horny head protruded as far as the neck could stretch. Little by little, the shell slid up the embankment until at last a parapet cut straight across its line of march, the shoulder of the road, a concrete wall four inches high. As though they worked independently the hind legs pushed the shell against the wall. The head upraised and peered over the wall to the broad smooth plain of cement. Now the hands, braced on top of the wall, strained and lifted, and the shell came slowly up and rested its front end on the wall. For a moment the turtle rested. A red ant ran into the shell, into the soft skin inside the shell, and suddenly head and legs snapped in, and the armored tail clamped in sideways. The red ant was crushed between body and legs. And one head of wild oats was clamped into the shell by a front leg. For a long moment the turtle lay still, and then the neck crept out and the old humorous frowning eyes looked about and the legs and tail came out. The back legs went to work, straining like elephant legs, and the shell tipped to an angle so that the front legs could not reach the level cement plain. But higher and higher the hind legs boosted it, until at last the center of balance was reached, and the front tipped down, the front legs scratched at the pavement, and it was up. But the head of wild oats was held by its stem around the front legs.

Steinbeck is not the only literary master who features turtles. For those of you who are familiar with Æsop’s fable, “The Hare & the Tortoise,” you know that “The race is not always to the swift.” The overconfident rabbit in the fable took a long nap during the race with the tortoise because he was so far ahead. Unfortunately for him, he did not wake up until it was too late. The turtle won the race, as pictured here in the post. Please don’t tell my wife that I would rather be a land turtle than a rabbit (she even has dishes with rabbit etchings). Still, I think she knows very well you need to be like a turtle to run the race with TBI.

All of us face many trials in life. Like Christopher and me, you may not be swift. But remember: “the race is not always to the swift.” Time will tell. We hold out realistic hope for meaningful recovery.

Like the neurologist’s news that Christopher had attained minimal consciousness many months ago, Christopher’s recent baclofen pump surgery is a mile marker in the race. Several staff have raved to us of how limber Christopher is now. He appears far more comfortable, fluid, and rested. This can only help him in growing in alertness and responsiveness to prompts. Here are a few examples of positive signs over the past few days.

One of the CNAs looked inside Christopher’s room as she was passing by on Thursday. She stopped in her tracks and called the nurse and respiratory therapist over. Christopher was moving both arms across his body in a swinging motion.

The past two days, the same nurse asked Christopher to move his left arm from his chest to his waist. She wanted to take his blood pressure from his left arm. Christopher moved his left arm a little from his chest to the waist in response to her prompts both days. The nurse informed me that he was really trying based on his facial expressions. It took time. But he did it. The nurse could tell Christopher was frustrated with himself for having such difficulty. She encouraged him and assured him it was okay and said they would work on it daily. He then blinked repeatedly to indicate affirmation. I am blinking, too, as was the nurse. Christopher had never moved his left arm in response to prompts in the past. We were told early on that he would never be able to move the limbs on his left side. Run turtle, run!

My wife refers to this nurse at Christopher’s care facility as his second mom. She is simply incredible. She and her team of CNAs are doing unbelievable work with caring for Christopher. They and the RTs are marathon runners, too. Like a caring parent, this nurse is so attentive to various items. She even noticed that Christopher had swelling on his left check. She said that it was likely the result of a bug bite he suffered recently. Our nurse asked Christopher if the cheek was painful. No response. She then asked if it was itchy. He blinked twice quickly for “yes.” What’s that saying if Christopher can discern between pain and itchiness?

Christopher will have a post-surgery checkup for the baclofen pump this week. They may increase the dose gradually. The first indications are very good. As I have written recently, the hope is that Christopher’s contractions will continue to decrease, as well as the pain. Similarly, we hope that he will become increasingly rested and refreshed and better able to respond to prompts.

I’m no Steinbeck, but I love attending to detail in chronicling Christopher’s slow, ponderous movement in pursuit of healing. It even brings healing to me. We pray that Christopher’s healing becomes steadier with time. I also hope my reflections encourage you to keep running the race for life, no matter how many obstacles and hardships you face along the path. May we never forget: the race is not always to the swift. Run turtle, run!

You can find all the posts related to Christopher’s traumatic brain injury at this link. Some of them do not appear at this blog column. Thank you for your care and prayers! Blessings as you run the race of life.

July 3, 2022 Taking Freedom for Granted or to Heart This Fourth of July
Recent Comments
0 | Leave a Comment
"Thanks for great post Software Management System"
Ninja Web Tools Keep a Stiff Upper Lip in ..."
"I am so sorry for this frustrating and painful experience you and Christopher had to ..."
Jean Sullivan Keep a Stiff Upper Lip in ..."
"Thank you for this thoughful and thought provoking reflection."
Fred Horgan Homeostasis and Spiritual Peace
"My view of evangelicals is, if there is any proof of the existence of Satan ..."
Verdure What Is the Difference Between a ..."
Browse Our Archives
Related posts from Uncommon God, Common Good