This post is one in a series on sin and immortality.  You can read the entire series of linked posts here. 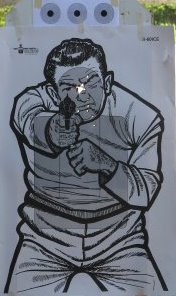 During the Vietnam war, the Army was responsible for training new draftees for combat.  Recruits were trained to aim their guns by practicing with bulls-eye shaped targets.  Although the men met the standards for marksmanship in training, when they went abroad, only about 20 percent fired their guns in combat, even when they were under fire.

Although the men were technically proficient, when they looked through their sights at another human’s face, they couldn’t pull the trigger.  The army’s response was practical; soldiers today are trained in marksmanship by aiming at human shaped targets that fall when they are hit.  The firing rates surged.

One of the reasons I am usually opposed to war is because the entire process of preparing soldiers depends on eroding the natural sympathy we have for other humans and our reluctance to cause them harm.  This kind of damage can’t be easily undone (as the high rates of suicide and PTSD among veterans make clear).

War today strives to remove soldiers from the battlefield, for the sake of their safety and, perhaps, the sake of their souls.  It is easier for a man to kill by pressing a button to launch a drone strike rather than killing with a gun, or, worse, a bayonet.  Culpability shouldn’t be expected to diminish, but soldiers do feel more disconnected from the consequences of their actions.

Once again, we’re facing down the dilemma of balancing guilt with functionality.  If our goal is to win a war, it makes sense to obscure the moral weight of operations from troops to help them manage, even if it makes it difficult for soldiers to reason clearly about the stakes of their decisions.  I believe it is always dangerous to keep knowledge of consequences from the relevant moral actor, so I am put off by drone strikes.

I’m even more disturbed by the sanitized coverage of our two wars.  Voters and politicians get to make the decision to put soldiers in an impossible position, making lose-lose moral choices that we would give anything to avoid making.  And we make the decision to expose them while being almost entirely insulated from the true costs and horrors of war.  It’s a recipe for disaster, and the souls we’re gambling with are not our own.

October 11, 2010 Confused by today's readings
Recent Comments
109 Comments | Leave a Comment
"On that note... I recommend every Catholic and Christian have that post a read. Click ..."
Oktavian Zamoyski Effective Altruism and Caritas [Radio Readings]
"I think too many people have grandiose and unnatural ideas about charity. It becomes a ..."
Oktavian Zamoyski Effective Altruism and Caritas [Radio Readings]
"Jesus wasn’t resurrected as a great miracle simply in order to convince people to believe ..."
John The Two-Lazarus Problem
"The cartoon is amusing, but flawed. One of the four virtues of Stoicism is Justice; ..."
Vulpes Inculta 7QT: Stoicism Man, Semi-Imaginary Money, and ..."
Browse Our Archives
Related posts from Unequally Yoked