I’m still in the middle of a series of posts on sin and immorality (and planning to respond to Peter Somerville’s questions about my post on drone strikes) but, unfortunately, I have a paper and a song to finish before class tomorrow, so I’ll have to wait a little on those posts.

In the meantime, I’d love to know if any Christians (or particularly well-informed atheists) can explain something that perplexed me during the readings at Mass today.  Rather than paraphrase, I’ll include the reading in its entirety (Luke 17:11-19): 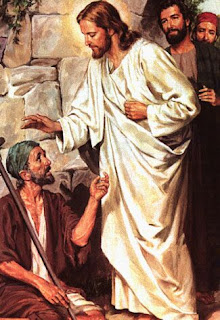 As Jesus continued his journey to Jerusalem, he traveled through Samaria and Galilee.

As he was entering a village, ten lepers met him. They stood at a distance from him and raised their voices, saying, “Jesus, Master! Have pity on us!” And when he saw them, he said, “Go show yourselves to the priests.”

As they were going they were cleansed. And one of them, realizing he had been healed, returned, glorifying God in a loud voice; and he fell at the feet of Jesus and thanked him.

He was a Samaritan.

Jesus said in reply, “Ten were cleansed, were they not? Where are the other nine? Has none but this foreigner returned to give thanks to God?”

Then he said to him, “Stand up and go; your faith has saved you.”

I was perplexed about the message of this reading, since it still seems like Jesus is playing a rigged game with the lepers.  The last thing Jesus spoke to them was an instruction to present themselves to the priests, and it appears the ungrateful nine followed his command.  If I were miraculously healed by a deity, I would find it prudent to demonstrate obedience, just as the other nine lepers are presumably doing, yet Jesus rebukes them in absentia.

To me, it felt a little like the story of Mary and Martha, in which normal duty is trumped by the possibiltiy of a special service to God.  Obviously as someone who likes set rules and expectations above everything else, I find passages about exceptions to be difficult to process and inutile.

Are the lessons from this reading meant mainly for the disciples and lookers on who witness both a demonstration of Jesus’s power and his praise of an outcast?  If so, why is it included for posterity?  For historical completeness or for some alternate lesson?  Anyone have an opinion?

I did ask my boyfriend about this passage after Mass, and he told me that his impression was that the main point was to emphasize the faith of the Samaritan despite the stigma attached to his heritage.  He didn’t know the particulars of the translation off-hand, but also mentioned that ‘command’ might be too strong a word to attach to Jesus’s request.

Chris did manage to shed light on the other part of the reading that confused me, and the explanation was interesting enough to share.  In the Old Testament reading (2 Kings 5:14-17), a leper is cured by following the instructions of a prophet.  He offers the holy man a gift, is rebuked, and instead asks a boon:

Naaman said: “If you will not accept, please let me, your servant, have two mule-loads of earth, for I will no longer offer holocaust or sacrifice to any other god except to the LORD.”

I was totally baffled by the mule-loads of earth, but, apparently, Naaman expected that all gods were tribal and linked to a particular location and people.  Therefore, to be able to worship the Jewish god, he would need to transport Jewish soil to his own home, to bring himself under the protection of their god.

So that’s one reading cleared up, and I’d appreciate any help on the first.

October 11, 2010 Chesterton's Unlikely Heirs
Recent Comments
7 Comments | Leave a Comment
"Oh! And you can get there via Naval Gazing.(probably not by Navel Gazing...)"
TheSparksFlyUpward Too Sucky To Be True
"Hello, Deiseach!1. This is not an ad. (It always reassures me when someone says that!! ..."
TheSparksFlyUpward Too Sucky To Be True
""Do you honestly think that a child raised by a woman has no exposure to ..."
Zorin 2012 Queer Blogathon [Index Post]
"I'd love to see a video of how it works. keranique shampoo reviews"
Marlene Garza Welcome Camels with Hammers to Patheos!
Browse Our Archives
get the latest from
Catholic
Sign up for our newsletter
POPULAR AT PATHEOS Catholic
1